Where Did the SARS Coronavirus Come From?

Disease: a condition that negatively affects a living thing.

It started out as a tickle, but now your throat feels scratchy and sore. You haven’t figured out yet if you’re sick or just didn’t drink enough water before going to bed last night. Your thoughts wander from, “How do I prevent this from getting worse?” to “How did I get sick?” Maybe you feel annoyed, because you remember that kid in your math class who coughed near you. They didn't even cover their mouth! But how do you think they got sick? 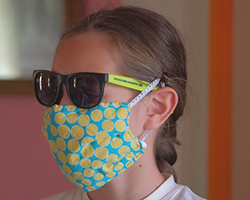 Wearing a face mask helps to protect others from getting sick. Image by John Perry.

If you could follow the trail of people getting sick, you would end up where it all started. Whenever a new disease shows up, scientists study the genome of the virus or bacterium. Using clues in the genome, they can figure out where the disease could have come from. Why do we care where it came from? Well, scientists can use this information to help predict future outbreaks of disease.

In the PLOS Pathogens article, “Discovery of a rich gene pool of bat SARS-related coronaviruses provides new insights into the origin of SARS coronavirus,” scientists studied the origins of a disease called SARS that broke out back in 2002.

Where do diseases come from and how do they spread?

Every night, as the last bits of light leave the sky, you may notice that the birds are replaced by another flying creature—bats. They are out, hunting…most often catching insects, including the mosquitos that try to bite you. Bats do a lot to reduce our insect populations and to help humans, but some people worry about bats. Though it’s rare, bats can carry infectious agents that could jump to humans and cause disease. The truth is that you can get sick from all types of animals, including insects. And even though bats may have links to human diseases, bats help us way more often than they hurt us. 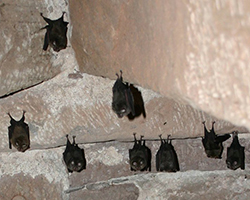 However, scientists think that bats may have been part of the link for the 2002 SARS outbreak. SARS was caused by the virus SARS-CoV, and is closely related to the virus that causes COVID-19, SARS-CoV-2. Both are coronaviruses that cause fever and breathing problems. Other coronaviruses cause seasonal colds and people usually recover from those without becoming too sick.

In a five-year study of bats in Yunnan province, China, scientists collected poop and mouth swabs from 602 bats. The swabs were then put through a chemical process to analyze the genes in the samples. A machine reads the samples and lights up different colors for the A, C, T, and G DNA pattern within. The scientists are then able to look at the virus genomes found in the bats.

Of all the bats tested, 64 (~10%) tested positive for SARS-CoV related viruses. These 64 SARS related virus genomes found in the bats show a high similarity to the SARS-CoV virus that can infect humans. 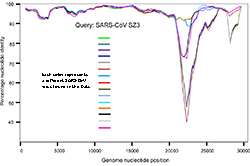 This graph shows the similarity in the DNA of different viruses. Click for more detail.

To determine if there were differences between the virus genomes collected, the scientists looked at the least similar part of SARS-CoV related viruses. The part of the genome they looked at showed a lot of differences among the viruses. This gives scientists information on how the virus changed over time. Changes in the genome can lead to the virus being able to infect humans.

How are these viruses related to other viruses?

It is important to know how viruses change to help develop treatments and prevent outbreaks. Scientists used genomes from the study to figure out the relationships of the SARS-CoV related viruses to viruses from other studies. The viruses from the bats in southwestern China were most similar to SARS-CoV in this study. This means that the 2002 SARS-CoV that infected humans most likely came from this region of China.

Scientists know that viruses can mix and match parts of their genomes. In this study, they found different parts of SARS-CoV in a variety of viruses in the bats. Next, scientists needed to see if they could get SARS-CoV by cutting-and-pasting the SARS-CoV related viruses together. They made this sort of “Frankenstein” virus to see if it could infect human cells. 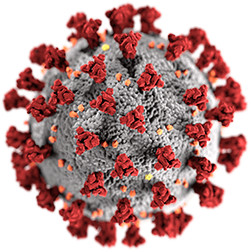 Coronaviruses all have a somewhat similar appearance, with spike proteins on their surface that makes it look like they are "crowned." Image by the CDC.

Scientists cut-and-pasted parts of the genome together from eight different SARS-CoV related viruses in bats. Two out of eight Franken-viruses were able to infect human cells. Scientists think that this was because key parts of their genomes were most similar to SARS-CoV. This supports the idea that SARS-CoV could have evolved from the viruses in this bat cave in Yunnan Province, China. That does not mean that it did, but other viruses like SARS-CoV could continue to evolve and infect humans. The 2019 COVID-19 pandemic may also have started from bats in China.

Scientists learned that the different SARS-CoV related viruses in these bats were likely made when parts of the genome mixed and matched to make new viruses. Mixing and matching takes place over several generations of viruses in bats. The scientists also found that the viruses in bats share similar DNA to the SARS-CoV that affects humans. This study provides a way to monitor viruses and prepare for disease outbreaks.

SARS-CoV related viruses can easily move around the world. Washing your hands often is one way you can help to stop the virus from infecting yourself and others. Don’t be that kid in math class. Cover your mouth when you cough and avoid others if you are sick. 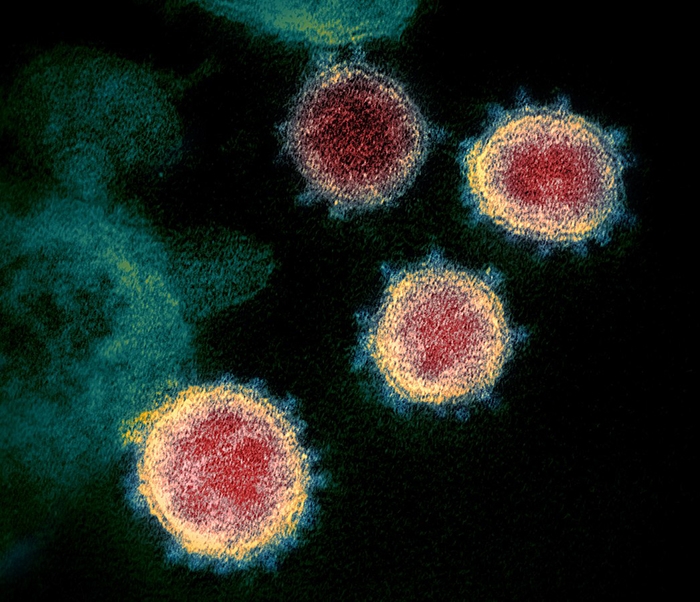 An image taken with a high-powered microscope shows the novel coronavirus (SARS-CoV-2) that causes COVID-19. It is possible that a few different coronaviruses that affect humans may have started in bats.
Discovery of a rich gene pool of bat SARS-related coronaviruses provides new insights into the origin of SARS coronavirus
Learn how to read a scientific article

Did the SARS coronavirus come from bats? | Ask A Biologist
Skip to main content