Angiosperms: A Guide to World Domination

Cretaceous Period: the geologic time period that lasted from 145 million years ago to 66 million years ago, and that ended with the asteroid strike that is believed to have caused extinction of the dinosaurs....more

Evolutionary tree: (or phylogenetic tree) a branching structure that shows the evolutionary relationships between different groups of organisms....more

Gymnosperm: a seed-producing plant that doesn't package its seeds within fruits or flowers....more 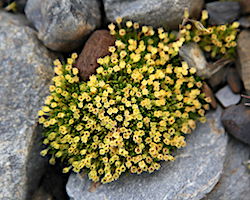 This Antarctic Pearlwort doesn't look so tough here, but this plant can live in a place that gets as cold as -80 degrees Celsius. That's colder than -100 degrees Fahrenheit. Image by Liam Quinn.

Life is competitive. All of the living things you see around you are the result of their ancestors, who successfully competed for food, water and space for millions of years. If I told you that most of the plants on land all come from the same ancestors, you’d think that those ancestors must have done something really well, right? Well, this is the case with the “angiosperms,” a massive group that accounts for 80% of all the plants you see on land. Compared to gymnosperms (needle-covered plants like pine trees), angiosperms just about rule the world.

There are almost 300,000 known species of angiosperms, including all of earth’s fruits, grasses, and flowers. Angiosperms can live in the blistering desert or the frigid Antarctic, and in evolutionary terms, they are still young.  Where did these angiosperms come from and how did they spread from a new group of species to one of the most widespread and diverse groups of living things in the world?

In the PLOS Biology article, “Genome Downsizing, Physiological Novelty and the Global Dominance of Flowering Plants,” researchers tried to figure out exactly what made these plants so special.

A Bit of Plant History...

Let’s say you’ve been transported back in time to the “Cretaceous Period.” If you went out walking, you would see mosses, ferns, needle-covered trees, and even some of the first flowers popping up. Flash forward 40 million years and BAM! – flowers are EVERYWHERE and the needle-covered gymnosperms that once covered the land aren’t the most common sight anymore. Instead, we have the big, leafy relatives of our flowering plants: trees that look more like Oaks or Maples.

This is an example of a simple evolutionary tree. Click for more information.

Okay, I know that 40 million years sounds like a very long time, but it often takes 100s of millions of years for life on earth to change noticeably. For angiosperms, it took less than 50 million years to kick gymnosperms off their prickly throne and become one of the most common forms of life around.

Living things depend on food for just about everything. Plants need food to grow and to make the seeds that will one day become a whole new plant. Unlike animals though, plants can photosynthesize, or make their own food (sugar) using sunlight and carbon dioxide. 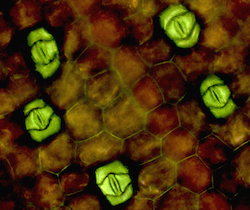 Plants have openings called stomata that let in carbon dioxide. Here, the stomata are the pores (holes) surrounded by bright green guard cells. Angiosperms have a higher number of stomata and veins per each section of plant tissue. Image by AioftheStorm.

Because this action happens inside of the leaves, plants have openings called stomata to let in carbon dioxide (CO2), kind of the same way that we breathe in through our mouths. After the cells in the leaves make sugars, the sugars are transported around the plant within veins.

Our angiosperm friends have a huge amount of stomata (plural of stoma) and veins which really makes the most of their photosynthesis. These stomata bring in loads of CO2 and the veins move sugars around very easily. This has helped angiosperms grow and spread way faster than other plants and has pretty much led them to world domination!

Why Hasn’t This Happened in Other Plants?

If having more veins and stomata is so helpful, why hasn’t this evolved in other plants? Well, in truth, it’s because all of these structures are made up of cells. If you want more transport methods in a leaf, you need more cells to make them, but that would mean a bigger leaf, which would need even more veins and stomata - see the issue here? It’s a cycle that would usually create bigger plants, unless of course, you find a way to make smaller cells. Angiosperms have small cells that can make a dense network of veins and stomata, like a bunch of side-by-side subway routes! So the next question is, how do you get smaller cells? 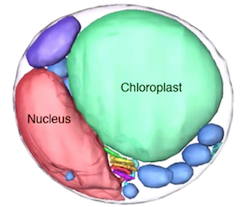 This image shows the amount of space a nucleus (and the DNA within) can take up in a cell. Click for more detail.

You might picture DNA as a tiny little chain, but when you are working within tiny, tiny cells, that DNA can take up a lot of space. The entire code of DNA (an organism’s whole genome) is in almost every one of that organism’s tiny cells. If there was a way to get rid of a bunch of DNA, you can have smaller cells. Smaller cells can leave room for more veins between cells, and for more specialized cell structures, like stomata.

The scientists came to this idea by looking at the genomes of a bunch of plant species (not just angiosperms). They measured which plant species had the smallest genomes and therefore, the least amount of DNA in each cell. Thankfully, they didn’t need to do all these measurements themselves. A lot of information on plant DNA has already been recorded.

How Do You Measure Genome Size? 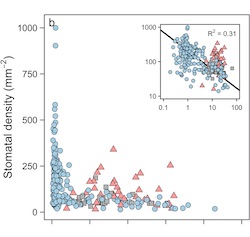 This graph shows that the density of stomata goes up as genome size goes down. Click for more detail.

If we can’t see DNA very easily, how would a scientists be able to measure something like genome size? Well, there are a few ways. They can look at special cell images from powerful microscopes and measure physical size. They can measure the concentration of the amount of phosphate in a counted number of cells, as phosphate is an important part of DNA molecules. Or they can figure out the concentration of a single gene that has been marked with a dye (they can do this by looking at how light is absorbed by a sample with all of those specific genes dyed). These are just a few ways that scientists can measure genome size.

So the scientists from this project gathered together all of this info from other scientists and looked at plant fossils to help them think about angiosperm history. They found that angiosperms were the only group of plants that went through a genome downsize during this period. This is what made them so successful. 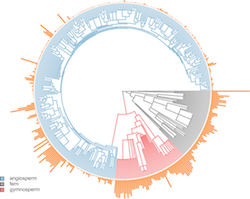 An evolutionary tree that shows how genome size compares between different groups of land plants. Click for more detail.

So the next time you’re out in nature and you’re wondering who to thank for the colorful scenery, the fresh air and the tasty fruits, you now have your answer. Angiosperms have been so successful because of their compact DNA and cells. Angiosperms - you are one magnificent bunch of plants. 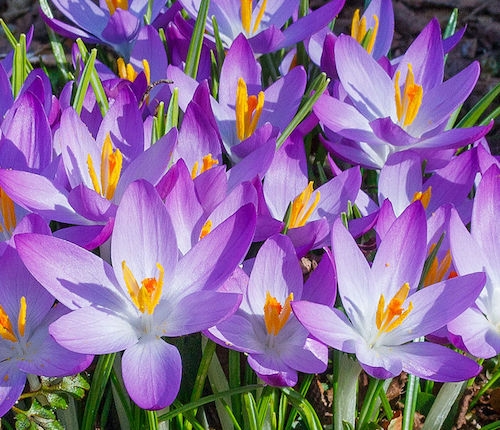 Flowering plants, like this crocus, are one of the most successful groups of organisms on Earth. What made them so successful?
Genome Downsizing, Physiological Novelty and the Global Dominance of Flowering Plants
Learn how to read a scientific article

Getting to the Root of Plant Biology
All Activities