Written by: Meghan A. Murphy

Cluttered environment: a habitat that has a lot of plants and objects in it.

Complex: complicated, or not simple.

Mealworm: a certain kind of worm that will grow to be a beetle. Mealworms are often used as pet food. 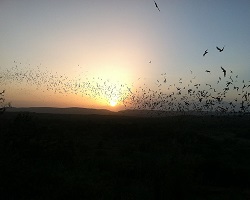 Sometimes you see one or two bats flying at twilight. In some places, like Texas, you can see thousands or millions heading out to hunt. Click to enlarge.

Have you ever seen a bat flash through the sky at twilight, beginning its nightly search for food? They may be hard to spot, but bats are everywhere – and they are probably flying through your backyard to feast on insects.

Some bats hunt in open areas where insects are much easier to find. Other bats hunt in areas where plants create lots of hiding places for insects. In these cluttered environments with plants, the plants make it harder for bats to hunt.

To find food, animals have to be able to learn the way around an area. Animals that have to hunt in a cluttered environment would benefit by learning faster. Because of this link, the habitat in which an animal feeds might be able to tell us something about its learning ability. Researchers explored how insect-eating bats learn in the PLOS ONE article, “Foraging Ecology Predicts Learning Performance in Insectivorous Bats.”

Hunting for Insects with Sound

There are a few different ways that bats can hunt or search for food. Some bats just listen for the sounds that insects make in order to find them. Others rely more on vision to find food, such as some fruit bats. 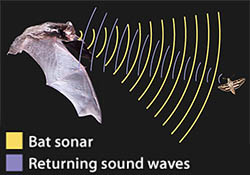 Many bats use echolocation to find food in the dark. They create sound waves with their mouth or nose and listen for the returning echoes to find insects. Click to enlarge.

But many bats use something very unique in the animal world to navigate and find food: echolocation. Have you ever shouted in a cave and heard the sound repeat? That repeating sound is an echo. Echolocation is when an animal makes a sound and listens for the returning echo to find out more about its surroundings.

Think about how we use our eyes to find things. It is easier to find your favorite toy when your bedroom is tidy than when it is very messy, because it is simply easier to see.

Bats that do use echolocation run into some problems similar to when you look for your favorite toy. Echolocating bats that hunt over water (like in a clean room) will be able to easily pick out the echoes bouncing off of insects. But when a bat uses echolocation in a cluttered environment, it will hear echoes from many other things besides insects, such as leaves and branches. There, they have to learn which echoes are from things they can eat.

What do these differences in habitat mean for the learning skills of bats?

Do Bats That Hunt in Forests Learn Faster?

The researchers caught three species of bats in Bulgaria. The Long-fingered bat hunts over water. The Greater mouse-eared bat does not use echolocation, but listens for insect sounds on the ground in forests and fields to find them. Geoffroy’s bat uses echolocation to find insects around vegetation. 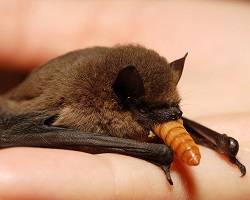 To test whether these bats could learn simple rules, they were put in a maze with one of their favorite treats—tasty mealworms. The bats had to crawl around the maze to find the mealworms.

The researchers watched to see how long it would take for the bats to learn to crawl directly to the mealworms (see picture of Maze A). This is kind of like if the researchers measured how many times you had to visit a new friend’s house before you could find your way there without making any wrong turns.

The next experiment looked at the bats’ ability to re-learn something. This time, the researchers put the mealworms on the opposite side of the maze (Maze A, the top maze in the image). This is considered a more difficult test, because the bats have to change what they already know and learn to crawl a different route. 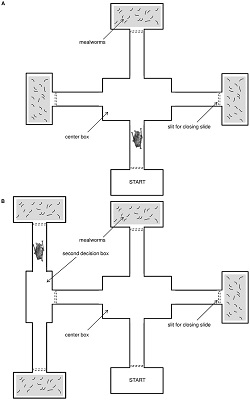 This picture shows the design of the mazes. Maze A is on top and Maze B is on bottom. Click for more detail.

Finally, to test the bats’ ability to learn complex rules, the researchers added two more paths to the maze (Maze B, the bottom maze in the image). In order to get the mealworms, the bats had to make two decisions: they first had to choose to move down one path of the maze, and then change directions to go down another path.

If your friend’s home were only a few houses away, it would be pretty easy to find. That is simple rule learning. If they moved to the other side of town, you would have to remember more complex directions to get there. That is complex rule learning. Once the maze tests were complete, all of the bats were released back into the wild.

The researchers found that all three of the bat species can learn simple rules in about the same time. They also have the same re-learning ability. However, this was not the case when it came to flexibility.

When the researchers moved the mealworms, it took the Long-fingered bat (that hunts over water) longer to try looking down another arm of the maze to find them. This means that they are not as flexible in their learning ability, because it took them longer to try a different approach to finding food. Imagine if after your friend moved, you still tried to go to their house every day and were surprised that they were not there. This would mean that you were not very flexible in changing what you know, like the Long-fingered bat. 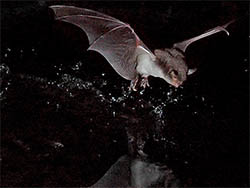 The Long-fingered bat hunts for insects and fish over water. Click for more detail.

However, when the Long-fingered bats eventually did try looking in a different place and found the mealworms, they were just as good at re-learning as the other bats. This means that once they finally found the mealworms in a different place, they remembered the new location and changed where they would look in the same way as the other bats. The Long-fingered bats differed from the other bats in complex learning. They were not as good at performing complex tasks as the bats that hunt in forests.

We often look at an animal to learn about the environment in which it lives. But this shows us the opposite can also be helpful. The habitat an animal lives in and its food source can sometimes tell us how it learns. 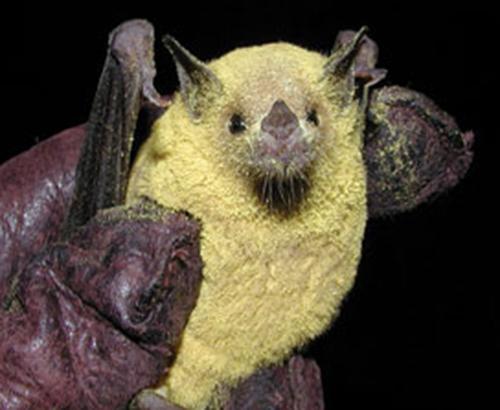 Some bats eat fruit or nectar instead of insects, like this lesser long-nosed bat that is covered in pollen.