Decoding Emotions in the Brain

Clinical: relating to medical treatment given to a person.

Coincidence: events or results happening with no obvious reason or connection.

Questionnaire: a set of questions given to person to gather information.

Self-report: to report about one’s own thoughts or behavior.

Skeptical: to be unsure of or to not believe in something.

State: the condition, situation or shape of someone or something.

You’re having a fantastic day. The sun is shining, the birds are singing, your favorite song is playing through your headphones and you feel like you could take on the world. You decide you want to share your good cheer, so you give your best friend a call. They pick up, grumble that they don’t want to talk and then quickly hang up before you can get a word in. With that reaction, it’s hard to imagine what might be going through your friend’s head.

Understanding the emotion of an Emoji can be easy, but the same is not always true for a human. Emoticons by Gustavo26776 via Wikimedia Commons.

We’ve all had that moment where we wish we could read a friend’s, sibling’s, parent’s or significant other’s thoughts. It would make it so much easier to know what’s going on.

Of course, while true mind reading might still only be possible in the pages of your favorite science fiction book, scientists wondered if it was possible to take a step toward making it a reality. In the PLOS Biology article “Decoding Spontaneous Emotional States in the Human Brain,” scientists investigated whether it was possible to record signals from the human brain and predict a person’s current emotional state.

Looking Inside the Brain 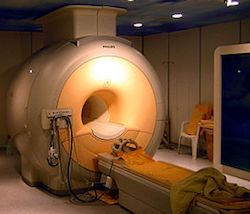 During an MRI, patients are asked to lie very still inside a giant tube. This tube creates a powerful magnetic field, which helps to produce detailed pictures of the brain. Image by KasugaHuang.

So how do we record information from the brain? It turns out that scientists have created many techniques and instruments that allow them to see how activity in the brain is changing. In this study, scientists used functional magnetic resonance imaging, better known as fMRI. Subjects lay down inside a very large tube and the machine measures changes in blood levels in different areas of the brain. Brain cells, called neurons, need oxygen all the time. However, they need either more or less of it when they are more or less active. Scientists use this as a measure of activity in the brain.

In a previous experiment, scientists found that they could use fMRI to map the brain’s activation for different emotional states, such as fear or happiness. They did this by collecting data when subjects watched a movie or listened to music that was likely to bring about different emotions. This gave scientists an “emotional dictionary”, so to speak, of what brain activity looked like for each of these different states. They could then apply this information to see how brain states relate to emotion.

But, scientists had another question. Could they record the emotional state of a person who was at rest, not watching or listening to anything? In this case, the subject isn’t receiving any stimulus that might make them feel a certain way. Rather, they are just thinking about anything they want, with different emotions naturally occurring due to these thoughts. To answer this, they performed another experiment where they asked subjects to come in, lay in the scanner and let their mind wander. It would be the equivalent of a quiet mental break lying on the couch. 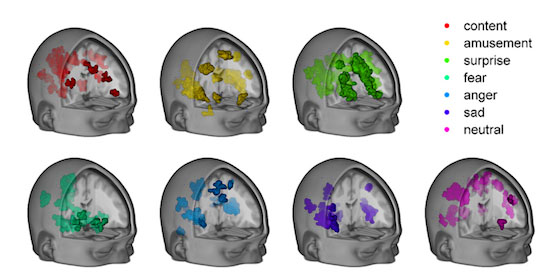 Scientists were interested in what areas of the brain became active for seven different emotions: neutral, contentment, amusement, fear, anger, surprise and sadness. These brain maps show the different regions that became active for each emotional state. Click for more information.

Scientists then compared this data to their emotional dictionary and found that, even during rest, they could relate emotional states to the brain data. Even better, they found that the emotional state that the fMRI data predicted was similar to what subjects reported feeling in a small questionnaire at the end of the scan session. This meant that the brain pattern was correlated with, or good at predicting, how a person reported feeling. 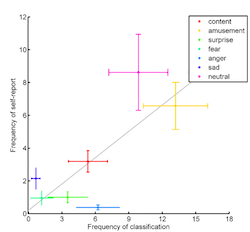 Scientists found a relationship between a subject’s self-reported feelings and the emotional state determined by the brain model. This meant that scientists were able to determine subject’s emotional state even when they were at rest. Click for more detail.

The results from these experiments were promising, but scientists were still skeptical. What if it was just a coincidence that the self-report and fMRI data were similar? Perhaps this method could only make very broad predictions about how a person felt. After all, the person was in the scanner for some time, so their emotional state could have shifted quite a bit throughout the experiment. For example, many subjects feel some anxiety when they first get in to an fMRI scanner because the space is a bit tight, and this feeling usually goes away as the scan progresses.

To help address this concern, scientists performed one final experiment. Here subjects were asked to relax in the scanner and let their minds wander. But, periodically throughout the fMRI scan, they were asked to report how they were feeling. So, by the end of the experiment, there were multiple reports of this information. Scientists could then relate these responses to the brain data at many different points in time.

The Neural Code of Emotion

A comparison of these periods showed that the brain activity for different emotions was closely related to subject’s self-reported emotional states. Overall, this meant that scientists were actually able to predict a person’s emotional state. They considered this to be a real-time measurement of emotional states in the brain, one that is much more similar to how our emotional states shift throughout a given day.

While we have a long way to go before we can truly read a person’s mind, the ability to use fMRI data to understand a person’s emotional state is a great step forward. Scientists report that they still have a lot to learn before we can apply this to very similar emotions, like fear or anxiety. Regardless, they are hopeful that this could be an important clinical tool to help people who have trouble understanding  emotions. 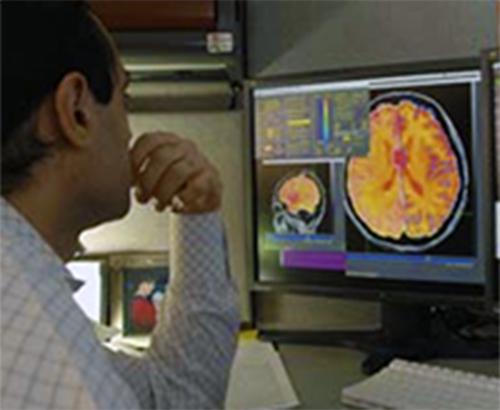 Functional Magnetic Resonance Imaging (fMRI) is a clinical tool that doctors and scientists use to study the human brain. Image by NIMH via Wikimedia Commons.
Decoding Spontaneous Emotional States in the Human Brain
Learn how to read a scientific article