Myelin sheath: covers the axon and works like insulation to help keep electrical signals inside the cell, making them move more quickly.

Nerve: many neurons bundled together.

Neurons are unique for many reasons. For one, they have a shape that is not like any other cells. Nerve cells are also some of the longest cells in your body. There are nerve cells as long as a meter. They stretch from your hips all the way down to your toes! This is very uncommon for cells, which are usually very short. Most cells are 20 micrometers in diameter, which is just a fraction of the width of a hair.

Nerve Cell: Dendrites receive messages from other neurons. The message then moves through the axon to the other end of the neuron, then to the tips of the axon and then into the space between neurons. From there the message can move to the next neuron.

Neurons pass messages to each other using a special type of electrical signal. Some of these signals bring information to the brain from outside of your body, such as the things you see, hear, and smell. Other signals are instructions for your organs, glands and muscles.

Neurons receive these signals from neighbor neurons through their dendrites. From there, the signal travels to the main cell body, known as the soma. Next, the signal leaves the soma and travels down the axon to the synapse.

Myelin sheaths cover the axon and work like insulation to help keep the electrical signal inside the cell, which makes it move more quickly. As a final step, the signal leaves through the synapse to be passed along to the next nerve cell.

Let's look a bit closer at how this all works.

How Do Nerve Signals Work?

Nerve signals actually come down to some interesting chemistry. Nerve cells communicate with each other using chemicals called neurotransmitters. If the combination of neurotransmitters is correct, then they can cause an electrical current to sweep down the nerve cell. Then, the electrical nerve signal travels along an axon in a rush of chemistry. Ions, which are small, charged molecules, move in and out of entrances in the membrane. These movements travel down the axon, like dominoes that have been tipped over. Once the electrical current reaches the end of the cell, it causes other chemicals to be released. This movement of a signal down a neuron is called an action potential. Most neurons fire in this way, but not all neurons are the same.

There are many types of neurons in your body. Each type is specialized to be good at doing different things.

Multipolar neurons have one axon and many dendritic branches. These carry signals from the central nervous system to other parts of your body such as your muscles and glands.

Unipolar neurons are also known as sensory neurons. They have one axon and one dendrite branching off in opposite directions from the cell body. These cells pass signals from the outside of your body, such as touch, along to the central nervous system.

Bipolar neurons have one axon and only one dendrite branch. They pass signals from one neuron to the next inside the central nervous system.

Pyramidal neurons are named after the shape of their cell body, which looks like a pyramid. They have one axon and two main dendrite branches. These cells pass signals inside the brain and tell your muscles to move.

Purkinje neurons (named after the man who discovered them) are found in the cerebellum, the part of the brain that controls balance, coordination, and timing of actions. They have one axon and a very dense and complicated dendrite arrangement. 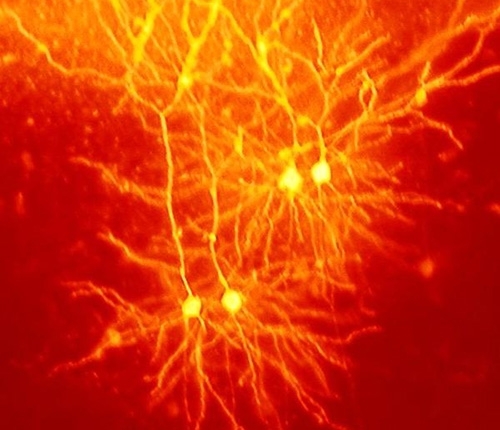 How many types of neurons are there?