What Are the Regions of the Brain and What Do They Do?

The brain has many different parts. The brain also has specific areas that do certain types of work. These areas are called lobes. One lobe works with your eyes when watching a movie. There is a lobe that is controlling your legs and arms when running and kicking a soccer ball. There are two lobes that are involved with reading and writing. Your memories of a favorite event are kept by the same lobe that helps you on a math test. The brain is controlling all of these things and a lot more. Use the map below to take a tour of the regions in the brain and learn what they control in your body.

The brain is a very busy organ. It is the control center for the body. It runs your organs such as your heart and lungs. It is also busy working with other parts of your body. All of your senses – sight, smell, hearing, touch, and taste – depend on your brain. Tasting food with the sensors on your tongue is only possible if the signals from your taste buds are sent to the brain. Once in the brain, the signals are decoded. The sweet flavor of an orange is only sweet if the brain tells you it is. 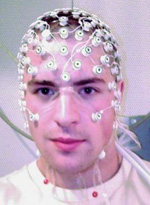 How do you tell if the brain is working? What is it doing and how do you measure it? The head gear on the right that looks like it's from a work of science fiction measures electrical activity in the brain. These electrical waves are called brain waves.

When neurons send a signal they use electrical currents to pass messages to other nearby neurons. Just one or two neurons signaling is too small a change to be noticed. When a huge group of neurons signal at once, however, they can be recorded and measured with the help of special tools.

Measuring electrical activity in the brain is usually done with electrodes. Electrodes are devices able to record electrical changes over time. These are attached to the surface of the skin in specific places around the head. Recordings of brain wave activity look like a series of waves. These are called electroencephalograms, or EEGs for short.

Measuring activity in the brain can be a very useful tool in scientific studies. They can also be used to help identify sleeping disorders and other medical conditions relating to the brain.

The first human electroencephalogram, recorded in 1924 by Hans Berger.