Parasympathetic nervous system: the part of your nervous system that unconsciously controls your organs and glands when your body is at rest.

Sympathetic nervous system: The part of your nervous system that unconsciously controls your organs and glands when you're excited or frightened.

Parts of the Nervous System

The center of the nervous system is the brain.  The brain takes in what your eyes see and ears hear, and if you decide that you want to move around, your brain tells your muscles to do it. 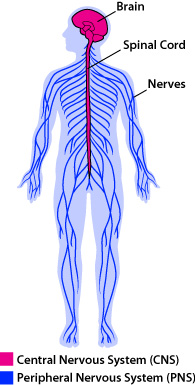 The nervous system is really complicated, but it can be divided into two really general parts.  One is the Central Nervous System (or CNS).  The CNS consists of your brain and spinal cord.  The brain and spinal cord are inside your skull and vertebrae (the vertebrae make up your backbone).  These bones protect the CNS when you get into accidents.

The other part of the nervous system is the Peripheral Nervous System (or PNS).  The PNS consists mainly of the nerves that go to and from the CNS.  Unlike the CNS, though, there is no bony protection for the PNS.  Have you ever hit your "funny bone?"  That odd feeling was you pinching one of the nerves in your arm. That nerve is part of the PNS. It has no bones to protect it so it's easy to hit!

Together, the sympathetic and parasympathetic systems make up the autonomic system of the PNS. The other part of the PNS, the somatic system, controls all voluntary muscles of your body. So when you decide to move a muscle, you are using the somatic part of your peripheral nervous system.

Brett Szymik. "Parts of the Nervous System". ASU - Ask A Biologist. 03 May, 2011. https://askabiologist.asu.edu/parts-of-nervous-system 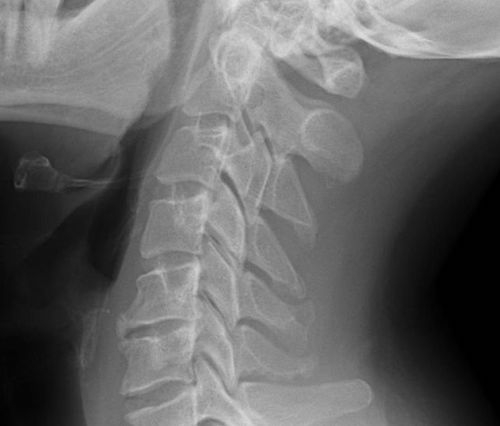 The vertebrae in your backbone help protect the spinal cord, which is part of the central nervous system.