Carbohydrates: chemical groups that include both simple sugars like glucose and complex building blocks like starch and cellulose... more

Lipid: a building block of life (molecule) made from smaller pieces (fatty acids). There are several kinds of lipids - fats, waxes, sterols,... more

How Many Cells Are in the Human Body?

All living beings are made up of cells. Some of them are made up of only one cell and others have many cells. The average adult human body has around 37.2 trillion cells. WOW, that's a lot of cells. So many, in fact, that it's hard to picture. But let's try to imagine it: If we lined up all the cells in a human body end to end, could the line reach around the Earth? If so, how many times? 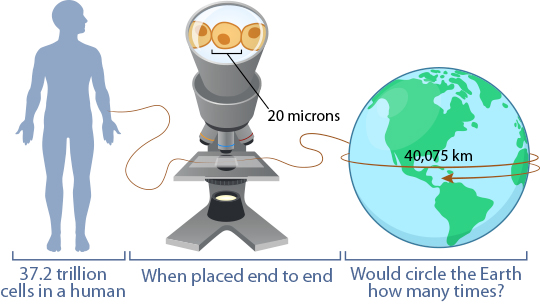 An adult human body is made up of about 37.2 trillion cells. If we were able to put all of these cells end to end, how many times do you think they would circle the Earth? Click to find the answer.

Cells got their name from an Englishman named Robert Hooke in the year 1665. He first saw and named "cells" while he was experimenting with a new instrument we now call a "microscope." 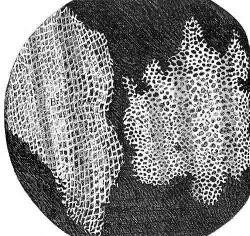 A drawing of cork seen through the microscope by Robert Hooke.

For his experiment, he cut very thin slices from cork. He looked at these slices under a microscope. He saw tiny box-like shapes. These tiny boxes reminded him of the plain small rooms that monks lived in called "cells".

If We Are Made up of Cells, What Are Cells Made From?

Look around at your house and nearby houses. They are made from smaller building materials such as wood, bricks and cement. So are the cars in the street and bike you ride. In fact, everything is made from building blocks including living things.

What Are the Building Blocks of a Cell Like?

If you take a look at your home you will notice it is enclosed by outer walls. All cells are enclosed within something called a plasma membrane. The plasma membrane is not exactly the same thing as the wall in your house, but it does hold parts of a cell inside. These parts of the cell are what biologists call "organelles." That is a Latin name for little organs.

Sometimes people think of cells as a balloon filled with fluid. That is not really true because a balloon does not let things move in and out like the membrane of a cell. It is important for cells to be able to move materials in and out of the cell.

Cells are amazing. They are all made of similar building blocks, but they do many different things depending on how they are programmed. Some cells carry oxygen to parts of our body. Other cells defend against invading bacteria and viruses. There are cells that transmit signals through out the body like the signals from your eyes to your brain while reading this article. Some cells can even convert the sun's energy into food. This is called photosynthesis. There are hundreds of jobs that cells can do. Cells also make other cells in a process called cell division. That is something other building blocks cannot do. 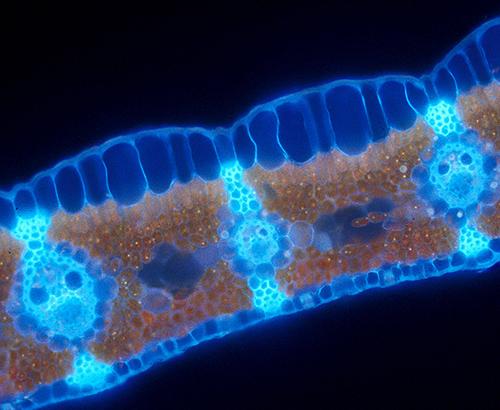 Looking inside an umbrella plant leaf (Cyperus alternifolius) it is easy to see cells can be different shapes and sizes.

Take a closer look inside of animal, plant, and bacteria cells with our cell viewer simulation.