Bubonic plague: bacterial disease carried by fleas of infected Old English rats. At its worst, it killed two million people a year. Those that caught the disease had a 90% chance of dying from it. 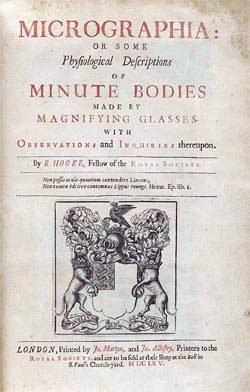 The cover of Robert Hooke's Micrographia, published in 1665. In addition to illustrations of insects, snowflakes, and his famous slice of cork, he also described how to make a microscope like the one he used.

The year was 1665. A book of illustrations called Micrographia has just been published by the English natural philosopher, Robert Hooke. The camera had not yet been invented so illustrations were common for books and other publications. What was uncommon about Micrographia was that it was one of the first time drawings of the microscopic world had been published.

Within the publication more than 30 detailed illustrations appeared including the famous one from cork that provided the first documentation of a single cell. Hooke also examined hair under a microscope and made a note that some of the hairs were split at the ends. This is possibly the first notation of split ends.

Examples of Hooke's detailed drawings can be seen in the illustration of a cork and a flea below. It was in his description of cork that he first used the term "cell" even though he did not know how important his discovery would become. The cell wasn't really understood until 1839 when scientists began to discover its importance.

Why Call it a Cell?

Hooke's drawings show the detailed shape and structure of a thinly sliced piece of cork. When it came time to name these chambers he used the word 'cell' to describe them, because they reminded him of the bare wall rooms where monks lived. These rooms were called cells.

Gallery of Images from Micrographia

There were no cameras when Robert Hooke first explored the tiny world with his microscope. To bring these images to life and share them with the world, he had to draw what he saw using his new instrument. Here are a few of the amazing drawings he made and published in 1665.

Read Micrographia and view all the images at eBooks@Adelaide.

Historical Anatomies on the Web (NIH).

Image of the scanning electron microscope snowflake from Beltsville Electron Microscopy Unit, part of the USDA. 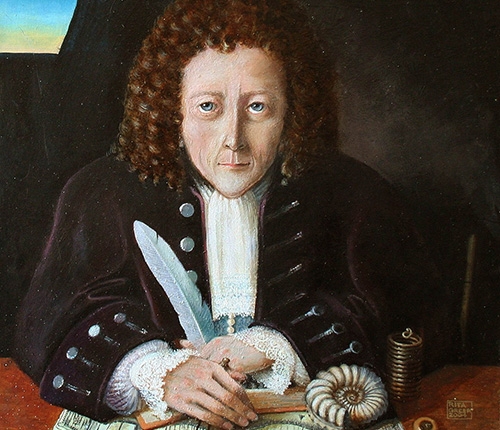 Portrait of Robert Hooke. This is an artist's impression of Robert Hooke. It was created from the descriptions by his colleagues Aubrey and Waller. Image via Wikimedia. Painting by Rita Greer.