What’s the Link Between Music and Your Brain?

Genre: a grouping or category of items that can include similarities, look, and subject matter. Some movie genres are mystery, horror, comedy, science fiction.

Lily turns up the volume when she listens to rock. She taps her foot to the boom of the drums and bass notes. She enjoys music with unpredictable sounds and has fun finding patterns in the beat. Her brother Daniel prefers softer sounds. He likes to listen to gentle melodies in a quiet room. He daydreams as the lyrics and tune drift through his earphones. Lily likes to belt out the notes of a powerful punk rock song. Daniel prefers to let the meaning of the lyrics guide his thoughts.

Are you like Lily or Daniel? Or are you somewhere in between? You’ve got your own, unique style when it comes to music, food, sports, and clothes. But did you know you also have a style of thinking? In the PLOS One article “Musical Preferences Are Linked to Cognitive Styles”, scientists studied the link between the music we like and the way we think.

Cognition is a complex brain process through which we gain information and knowledge about the world. In other words, cognition is thinking. Scientists in this experiment tested people for two different cognitive styles or "brain types." These brain types are called "empathizing" and "systemizing."

Have you ever played an instrument? You may have noticed that in some ways, music is like math. Notes can be played for different lengths of time, at high or low pitches, and in any order. Most songs have repeating verses and choruses that have specific patterns of sounds. For instance, you might hear the ba-dum of the drums in the background as the singer belts out two high notes and then a low one. If you think mathematically by finding logic in the world, you are a "systemizer" or "Type S.” 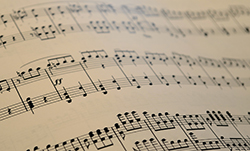 Music is mathematical. Notes of various lengths and pitches come together to create our favorite songs. Image source: Pixabay

Songs can make us feel powerful emotions. Some songs make us feel strong enough to take on the world, while others bring us to tears. Before a big exam, you might turn on a pop song with peppy lyrics and an upbeat rhythm. If you don’t get the grade you had hoped, you might pick a sad tune with a slow, calm melody. With a more emotion-based brain type, you are an "empathizer" or "Type E." Empathizers have strong empathy and are good at understanding their own feelings and the emotions of others around them. If you are an empathizer, you react to other's feelings, comforting friends when they're sad or celebrating with them when they're happy.

What Does Your Favorite Music Say About You?

For sonic attributes, empathizers like instrumental music (songs without words) and songs with acoustic guitars. Systemizers enjoy loud music with heavy bass and drums, and they like electric guitars more than acoustic ones.

In general, empathizers like music such as soft rock, R&B, and soul. Systemizers prefer songs that are of the heavy metal, punk and hard rock types. Both empathizers and systemizers enjoyed all other types of music.

Can Music Change Your Mood?

Scientists believe listening to certain types of music could make you more empathetic. Test this for yourself at home. Does the music you listen to change your mood? Maybe you feel happiest when you listen to upbeat music.

Although songs can be private and personal, music can also be a social experience. In fact, studies show that we bond and create friendships when we make music with others. Do you feel like music is best enjoyed in a group? Do you and your friends like to listen and sing along to songs together? 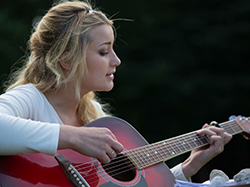 What about your thinking style? Are you an empathizer, a systemizer, or somewhere in between? Can you think of something other than brain type that could be related to the music we like?

For instance, studies have shown that personality types also influence our taste in music. Even a person's gender relates to what music they like.

Brain type, personality, and gender probably aren't the end of the story. There could be many other factors that influence our favorite music that scientists haven't studied yet. Sometimes, answering questions creates even more questions. That's what science is all about!

It you want to help scientist learn more about music and personality. You can fill out this online survey - www.musicaluniverse.org. Please note that you must be 18 or older to participate.

Annika Vannan. (2017, June 30). What’s the Link Between Music and Your Brain?. ASU - Ask A Biologist. Retrieved February 2, 2023 from https://askabiologist.asu.edu/plosable/brain-music

Annika Vannan. "What’s the Link Between Music and Your Brain?". ASU - Ask A Biologist. 30 June, 2017. https://askabiologist.asu.edu/plosable/brain-music

Does your brain dictate what music you like? Image by Wuhuiru55 in Wikimedia Commons.