Is a City Slicker Sicker?

Antioxidant: a molecule that can prevent the damaging effects of stress in the body......more

The city is an exciting place, with huge buildings, endless activity and interesting people. But imagine for a moment you are a bird – what are the challenges you now face? Maybe the loud car horns or giant people scare you. Researchers have been working hard to find out why it is stressful to be a bird in the city. They also think that being stressed out makes it easier for birds to get sick. In the PLOS ONE article, “Parasites in the City: Degree of Urbanization Predicts Poxvirus and Coccidian Infections in House Finches (Haemorhous mexicanus),” researchers ask whether city birds are sicker than their non-city friends.

The city is full of sounds, light, action and pollution. Researchers believe this is causing stress for city birds. Times Square New York.

Stress in the City

For millions of years, birds lived in a world without humans or cities. When cities grew, birds and other animals had to deal with loud noises, harmful pollution, bright lights and other stressors. The researchers believe that stress can make a bird’s immune system weaker. This means that parasites may have a greater chance of infecting a host bird. This also means that the infection can become worse, even deadly.

Cities also have lots of food for birds, which attracts many of them to a small area. When lots of birds are in a small area, it may be easy for parasites to infect new birds.

Researchers in Phoenix, Arizona went out and caught House Finches from seven different spots in the city. At each spot, they counted how many people lived in the area, and how much it had been changed by buildings and roads. They found that some areas had lots of people and buildings, and others had few. Places with more people and buildings are said to be more urbanized.

Researchers wanted to know if birds in more urban areas showed signs of stress. They took blood from the birds they caught and they looked at damage to lipids (like fat), a sign of stress. The researchers thought that birds in the city would show higher signs of stress, but they found that there was no difference. They think this is because the birds use molecules called antioxidants to protect their lipids from stress damage.

Parasites: A Real Can of Worms

The researchers also wanted to know if the birds in more urban areas had more parasites. Parasites are organisms that benefit from other organisms without giving anything in return. It’s just like when your brother, sister or friend takes a bite out of your food, without giving you any of theirs.

One type of parasite called coccidia are so good at stealing food, they live inside of other organisms' intestines. If you’re coccidia, the intestines are a great place to live. Everything you need to survive is found there: warmth, moisture and tons of food.

As if parasites weren’t enough to worry about, some birds also get Avian Poxvirus. Viruses are a unique type of parasite. After a virus gets inside of a host cell, it uses the cell to make more viruses. This is like going into a factory that makes superhero action figures, and changing the machine so it makes action figures of you instead!

On the left are Coccidian parasites viewed under a microscope. These particular coccidians were from the intestines of an infected cat. Coccidia can infect many animals including dogs, cats, birds and humans. The image on the right is a Laysan albatross chick infected with avian poxvirus. The bumps caused by the virus cover the bare parts of the body, such as the face, legs, mouth and throat.

What Did They Learn?

The researchers collected some feces from each of the birds at their study sites. They used a test called a fecal float to look for the eggs of parasites in the bird poop. They found that city birds were more likely to have parasites and they had worse parasite infections. Who would have guessed you can learn so much from poop?

The Result: The City Slicker is Sicker

The researchers were able to show us that when humans change the natural habitat of birds, birds are more likely to be infected by parasites. Now the researchers are asking, why? They have some ideas.

For a bird, food is easier to find in the city. At sunset, street lamps attract moths and other insects, giving birds a tasty snack. People leave bird feeders in their yards. Birds will even eat food from trashcans or off of the ground. All of this extra food means lots of birds can inhabit a small area. The researchers think that when birds group around food sources like this, parasites have an easy time jumping from one bird to the next. 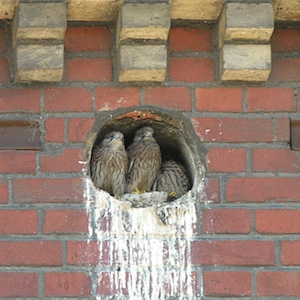 Common Kestrels nesting in their city appartment could suffer from stress just like their human neighbors.

Learn more about birds in the city and stress.

Foraging in the City

Parasites in the City: Degree of Urbanization Predicts Poxvirus and Coccidian Infections in House Finches (Haemorhous mexicanus)
Learn how to read a scientific article