Morphology: the study of the structure of organisms such as shape or color, as well as bones and organs... more 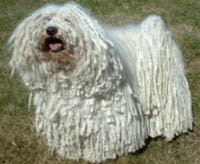 Pulis have a very distinct coat.

Do you have a dog? A Golden Retriever, Poodle, Great Dane or maybe a tiny Chihuahua? That’s just listing a few – there are over 170 recognized dog breeds! Scientists are finding out that what makes dogs look different from one another (their doggie DNA) is less complicated than many other species, like you and me. In the PLOS Biology article, A Simple Genetic Architecture Underlies Morphological Variation in Dogs, scientists are examining what causes dogs to look the way they do.

There are 170 official dog breeds recognized by The American Kennel Club, and that’s not even counting the unregistered breeds and mutts. With all these different types of dogs, how did Great Danes and tiny Chihuahuas come to look so different?

The answer is in the doggie DNA.

Many scientists are just as curious as you about what makes dogs look the way they do, or in other words, how the genes in dog DNA are expressed as a phenotype. Just like us, dogs inherit genetic information from their doggie dad and mom. That genetic information determines how they look. Scientists have identified how many different genes get passed down through the generations to affect how dogs look.

One group of scientists set out to answer this question with the CanMap Project. They created a huge genetic map of canine DNA. The scientists gathered this DNA from 80 different dog breeds as well as wolves, jackals, and even feral African village dogs. We wouldn’t want to cuddle with some of those breeds.

Dogs are diverse. They come in all different colors, shapes and sizes.

The scientists mapped over 120,000 spots on each dog’s DNA. They did this to see how the dog’s nucleobases fit together. Nucleobases are the puzzle pieces that make up genes. By looking at the nucleobases, scientists can determine where differences arise in the doggie DNA. When the DNA of one dog breed has more bases in common with the DNA of another dog breed, it means they are more closely related. Just like you and your family have more bases in common than you and a stranger. 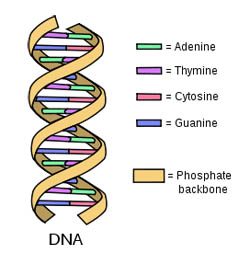 Nucleobases like adenine, thymine, cytosine, and guanine are the building blocks of DNA.

Humans have had a large influence on dog DNA too since dogs were domesticated and bred by humans to look the way they do. For instance, humans bred Chihuahuas with other Chihuahuas for a very long time. This means that Chihuahuas have many identical nucleobases on their DNA, and all those puzzle pieces fit together to look like a Chihuahua.

Short segments of genes from a distant dog relative, the gray wolf, were found in every sample of the dogs’ genetic information. However, the nucleotides that make dogs look different were only found in a few areas of the DNA. These reflect the areas that have changed in the centuries since people started breeding dogs for different traits, creating many different breeds of dog in the process.

In humans, our diversity and nucleotide puzzle pieces work differently. Instead of human diversity arising from a few different areas on the gene, the way we look is regulated by hundreds of different weak genes that interact to make us unique! Dogs may have fewer areas of diversity compared to humans because of what scientists call a gene bottleneck.

Imagine black and red ants trying to get into your house through a very small neck of a bottle. There may be many ants outside, but only so many can enter the house because they have to go one-by-one in a single file line.

If only red ants get through before the bottleneck closes, those ants may go on to have only red ant babies in the future. Even though there used to be more diversity in ant color, only red ants got through and it changed how the entire population looked. This is similar to how a gene bottleneck works.

Imagine that you could line up all the different dog genes in a single-file line and march them through a bottleneck. Only a certain number get through, and those determine how a dog looks. It’s on a larger scale, but it’s like only letting the red ants through. We humans are the ones that are responsible for closing off the bottleneck, and we choose which dog traits we like best. So a dachshund (or wiener dog) is chosen because of his short and long body, while a Great Dane is chosen for his huge body.

Diversity is lost in this process, or in other words, lots of those nucleotide puzzle pieces get eliminated. For centuries people have been creating gene bottlenecks by selectively breeding different dogs for different traits. That explains why so few areas on the genome are responsible for how dogs look.

So Are Dog Breeds That Different? 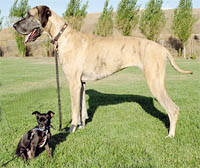 Genes from this Great Dane and Chihuahua mix are similar, even though they look very different. Wikimedia - Ellen Levy Finch

So are Great Danes and Chihuahuas pretty much the same? Yes and no. Just by looking at these dogs, you can tell that they are very different, but that’s because of humans breeding them to look like that. Scientists found that only a small number of genes actually account for different phenotypes. So only a few very powerful gene locations lead to doggie diversity, even though dog breeds look so different!

Want to read and learn more? 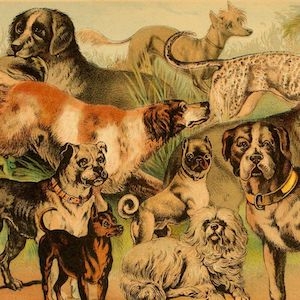 Humans have been breeding dogs to look many different ways for hundreds of years.