Hot Flashes in the Ocean

Coral: a polyp or polyp colony, together with its membranes and skeleton....more

Coral bleaching: when corals push out algae that live inside them, turning the coral white. The algae help coral get most of their energy, so bleached corals are at risk of starving to death....more

Coral reef: a ridge of rock in the sea formed by the deposit and growth of coral....more

El Niño: warming of ocean temperatures that occurs every two to seven years....more

Heat stress: stress that an organism experiences due to rising environmental temperatures.

Meta-analysis: a comparison of the results of many similar scientific studies to create a more complete analysis of a scientific question... more

Polyp: small individual animals like sea anemones or members of a coral colony that have a vase-shaped body with a mouth surrounded by tentacles....more

It’s a clear summer day, and you’ve been playing outside for a while. The sun is beating down on you. You get thirsty. You start to sweat and feel tired. Eventually, you look for some shade or go inside to cool off. You need relief from the intense heat. The air conditioning feels really good on your skin when you go inside. If you don’t escape the heat, eventually you will get sick. In humans, this is called heat stroke. 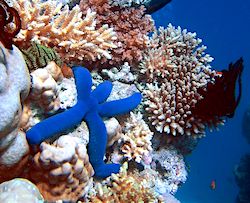 A blue starfish sits on coral in a coral reef at the Great Barrier Reef in Australia. The bright colors serve as a visual reminder of the diversity that can be found in coral reefs. Image by Richard Ling wikipedia @rling.com.

Coral reefs also get sick when it gets too hot. Reefs are some of the most beautiful and unique ecosystems on Earth. Coral polyps live underwater, so they are very sensitive to the water temperature. Today, the ocean is getting hotter. In the PLOS ONE article, “Global Patterns and Impacts of El Niño Events on Coral Reefs: A Meta-analysis,” scientists studied how short and long-term climate change impacts coral reefs in the Pacific Ocean.

The World of Coral Reefs

Each reef is like a living work of art, playing host to a diverse group of underwater animals. Coral reefs cover just 0.1 percent of the Earth’s surface, yet they are home to 25 percent of all life in the ocean. Coral reefs also have a major impact on the economy. These colorful colonies attract tourists around the world.

Corals are very unique creatures because polyps are actually animals. Calcium carbonate, a kind of rock made by corals, holds the reefs together. It works as the corals’ skeleton. Many types of coral contain algae that help keep them alive. The algae give the coral up to 90 percent of its energy. 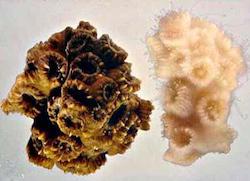 Although we depend on them, coral reefs are in serious danger. They are dying. When corals get stressed, they push those helpful algae out of their bodies. Then they turn white and die. This is coral bleaching.

Lots of things are bad for coral reefs, including warming temperatures, overfishing, and pollution. Scientists believe the main cause of coral bleaching is warmer ocean temperatures. Two climate patterns, one short-term and one long-term, cause warmer ocean temperatures that hurt coral. The important short-term climate pattern is called El Niño. The other long-term pattern is called climate change, also known as global warming, where Earth is getting hotter.

El Niño happens naturally every few years. In the last 35 years (since 1982), it happened eight times. Even though El Niño events are seasonal and temporary, they can have long-term consequences.

Sometimes an El Niño season can be enough to kill off a coral reef permanently. In other cases, the reef can recover with enough time. It depends on local conditions and how often the reef gets exposed to ocean temperatures that are too warm.

In this study, scientists wanted to better understand the impact of El Niño on coral reefs. They heard reports of lots of coral bleaching and areas where 97 percent of corals died. This happened during El Niño in 2015 and 2016.  They wanted to confirm this information.

The scientists collected studies from all over the world to look for patterns. This type of study is called a meta-analysis. Specifically, they looked for something that could predict where coral bleaching occurred. They also came up with a way to measure the heat stress for coral at any location on the globe. 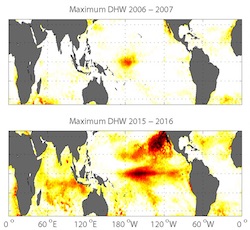 Scientists calculated the maximum heat stress for coral reefs around the world. This map measures the total effect of heat on corals. Click for more detail.

The scientists used temperature data available since 1982. They looked specifically at the 2015-2016 El Niño season in the Pacific. The study confirmed that 2015-2016 was especially damaging to coral reefs. They also came up with explanations for the damage.

The Impact of Climate Change

Even though the warming from El Niño is temporary and short term, it has a big impact because coral reefs are already under a lot of pressure. El Niño’s effects are worse due to long-term climate change.

The temperature of the Earth varies over time. Today many scientists say the Earth’s climate is changing and getting warmer. In addition to El Niño, climate change is also causing ocean temperatures to increase. This is bad news for coral reefs because warmer water can kill them. 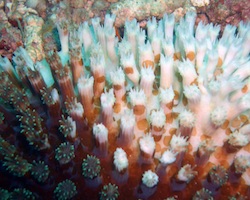 Coral bleaching can lead to coral death, and can affect whole communities of organisms. Image by Samuel Chow.

Understanding past El Niño effects can help scientists better predict future effects.  Scientists say El Niño events will happen more often in the future. They will also be more severe. Climate change will also make the problem worse by increasing ocean temperatures. That will mean more corals dying off due to the heat.

With the dual threat of El Niño and climate change, scientists worry that warmer ocean temperatures could destroy coral reefs forever. Knowing what is happening could help us better protect coral reefs. Some corals may adapt to warmer waters, so this information about changing temperature trends over time will help scientists do more research. That research could help us protect some of the coral reefs.

Ben Petersen. "Hot Flashes in the Ocean". ASU - Ask A Biologist. 14 May, 2018. https://askabiologist.asu.edu/plosable/el-nino-coral-reefs 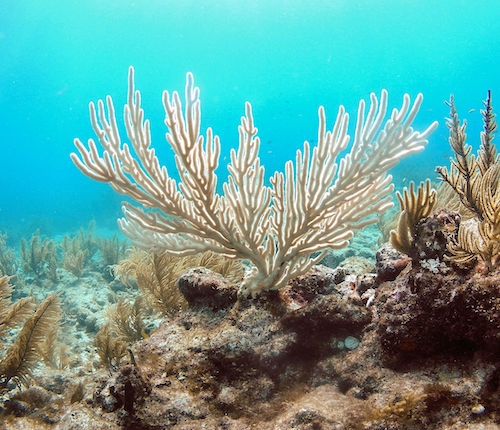 How do special climate events that warm the ocean contribute to the bleaching of corals, like in this bent sea rod coral?
Global Patterns and Impacts of El Niño Events on Coral Reefs: A Meta-analysis
Learn how to read a scientific article