Peruvian: a person from Peru.

A small and furry puppy rolls in the grass with its tongue hanging out and tail wagging. Many people around the world would agree that it’s tough to find a puppy that isn’t adorable. Loving these cute animals makes us care about them and want to protect them. But what happens when the animal isn’t seen as cute, adorable, or cuddly? 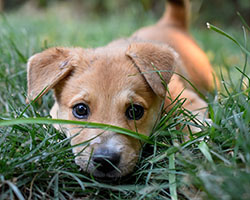 A small puppy peers through the grass. Image by trwirth via Pixabay.

Not many people think of sharks as cute, but sharks are still important. As predators, sharks make sure other populations (like fish) don’t get too big. Without sharks, marine ecosystems can fall out of balance.

Unfortunately, many people don’t like sharks, which means there isn’t much interest in protecting them. If sharks are in trouble, the oceans are in trouble.

Peru, a country in South America, created a program to find new ways to help sharks. One of the programs’ first goals was to research what Peruvians thought and felt about sharks.

In the PLOS Biology article “Attitudes and misconceptions towards sharks and shark meat consumption along the Peruvian coast”, scientists explored how people view sharks. Scientists asked what Peruvian people thought about sharks, how much they knew about them, and how much they ate sharks in Peru.

What’s the best way to find out what a person thinks? You ask them. Formally asking, or “surveying” people is how scientists find out what someone is thinking. 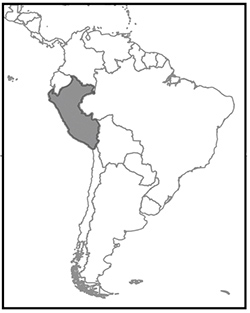 A map of South America. The country of Peru, top left, is darkened.

But how could you find out what people around a whole country think? It’s not possible to ask everyone, so scientists can ask a group of volunteers from all around the country.

Peru has 11 country regions along the ocean. For each of these coastal areas, scientists chose a single city to focus on. Each of these cities had at least 10 thousand people and were close to the ocean. Scientists wanted to determine how much the average person in these areas knew about sharks.

Scientists chose random volunteers at busy places, like shopping malls. The volunteers completed a 10-question survey about sharks. Some of these questions were multiple choice and some were short answer.

Volunteers did not have to give their names. This way the volunteers could be completely honest about their answers. 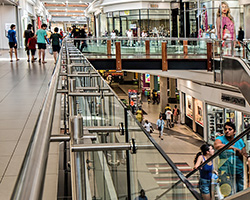 People were surveyed in crowded public places, like malls. Image by stevepb via Pixabay.

In total, 2,004 people took the survey. Researchers used a computer program to look for patterns within the answers. For example, researchers found which option was chosen most in multiple choice questions. For short answer questions, researchers found which key words (like “scary”) were used the most. Those words were then scored as negative or positive to get an idea of what people feel toward sharks.

What’s in a Shark Name?

Shark meat has been eaten in Peru for over 10,000 years and is still eaten by many people today. In Peru, all species of shark are often sold as “tollo”, the Spanish word for spotted dog fish. People can also buy blue shark but it may be labeled “tiburón azul” (blue shark) or “tiburón” (shark) or “azul” (blue). This means that buyers may not know they are eating shark and may not know what specific species of shark it is. 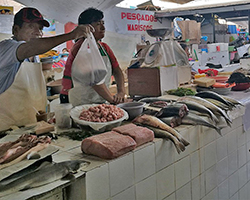 A seller in a seafood market in Chiclayo, Peru. Click for more detail.

Renaming seafood happens all around the world, including in the US. The Spiny dogfish, a type of shark, is sometimes sold in the US as “rock salmon” or “hass”.

What Peruvians Know About Sharks

Peru is home to 66 different shark species, but only 6 out of 10 participants were aware sharks existed in Peru’s waters. Participants also did not mention sharks’ role in the ocean ecosystem.

Words used to describe sharks in survey answers were analyzed to see if they were positive, negative, or neutral. Click for more detail.

There have been no recorded shark attacks ever in Peru. However, the volunteers still saw sharks as a threat. The most common words people used to describe sharks were “fear”, “dangerous”, “big”, “blood”, and “death”. 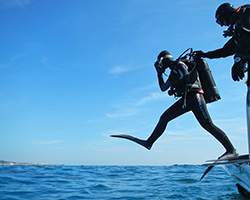 Even though there has never been a shark attack in Peru, local people do not get many chances to learn about sharks. Activities like SCUBA diving can be expensive and are often assumed to be more of a tourist activity. Image by FIRSTonline via Pixabay.

Even though shark attacks have never happened nearby, hearing about them is still scary. Most Peruvians learn about sharks wherever they buy their shark meat.

There are not many places in Peru to learn about sharks. Peru has no aquariums featuring local sharks. Diving with sharks is an expensive tourist activity. Most local Peruvians cannot afford to go SCUBA diving.

Based on the survey results, most Peruvians knew very little about shark biology or ecology.

Education to the Rescue

This survey showed that even though shark meat is consumed in Peru, many do not know it is shark they are eating. The survey also showed the public has little knowledge of local sharks, and serious fear of sharks. The good news is that this leaves room for improvement of attitudes toward sharks. Maybe more education can change how people think about sharks. 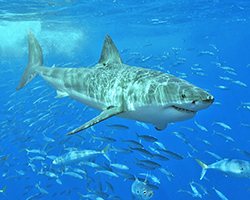 A great white shark swims through the ocean. Perhaps if people understood more about sharks, they would fear them less. Click to enlarge.

You can try to help sharks by learning more about them, and by sharing this information with others. Read another article about sharks, learn more about seafood, or visit an aquarium.  The more you learn the more you’ll see how important sharks are and how they are unfairly seen as a major danger to people. 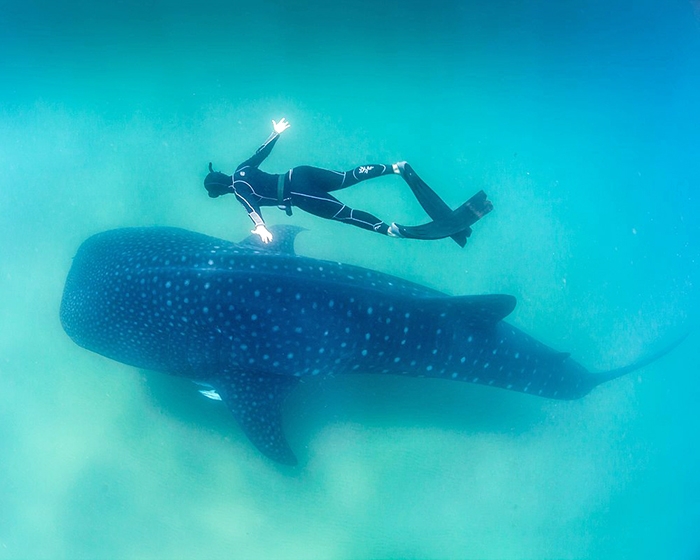 A person swimming alongside a whale shark. Image by Feefiona123 via Wikipedia Commons.
Attitudes and misconceptions towards sharks and shark meat consumption along the Peruvian coast
Learn how to read a scientific article