Apoptosis: self-destruction of a cell.

Carcinoma: cancer cells that start in the skin or the tissues that line and cover organs in the body... more

Cell membrane: the outside layer of a cell that separates it from its environment.

Nanoparticle: a very tiny object, often thought of as a small piece of matter measured on the nano-scale (between 1 and 100 billionths of a meter long).

With the push of a button on your video game controller, Mario leaps from the ground and pounds the large wooden block above him. A red and white mushroom appears and starts moving along the screen. You make Mario run after it and he quickly catches it. Suddenly, Mario doubles in size. 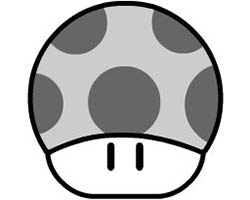 Mushrooms can't make you grow big or give you extra lives like they do in video games, but some can help you fight diseases.

Wouldn’t it be cool if real mushrooms made you super strong just like the ones in a Super Mario Brothers video game? Well, they may not be able to make you grow to twice your size, but some kinds of mushrooms can be used as medicine to help people fight diseases. Before people made the syrups and pills we use for medicine today, they used plants, mushrooms, and other things in nature to cure their sicknesses.

Scientists have looked at healing mushrooms in the past, and found that they can be used to help fight deadly diseases like cancer. Recently, they have been looking at ways to make them into a medicine that can be safely given to cancer patients. In the PLOS ONE article, “Apoptosis of Hepatocellular Carcinoma Cells Induced by Nanoencapsulated Polysaccharides Extracted from Antrodia Camphorata,” a group of scientists tested new ways to use nanoparticles and mushroom sugars to help fight cancer.

Imagine if your doctor prescribed you five leaves a day when you visited their office with a cough. It may seem strange, but many of the ingredients that go into the medicine you take are originally part of a plant, mushroom, or other living thing. So why doesn’t your doctor prescribe you plants and mushrooms instead of a liquid or pill? 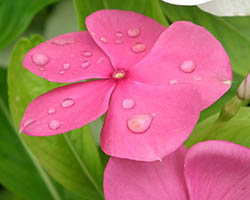 The reason the medicine aisle in the grocery store doesn’t look like the produce aisle is that scientists want to measure out just the right amount of each substance they use to make the medicine. For example, there might be a bean plant that makes small amounts of a specific substance that can cure a disease. Instead of telling a person to eat lots of plants in order to get enough of that substance, scientists will put it all into a single dose of medicine.

Scientists also take out all of the unnecessary stuff so that they are only giving you what you need to feel better. This is especially important if another part of the plant or mushroom is poisonous to eat. In both of these situations, it would be best to take the substance out of the organism and measure it out so that you get just the right amount.

A Sugar from Mushrooms Can Fight Cancer?

Medicine made from mushrooms and plants isn’t just for everyday sicknesses. It can also be used to treat some pretty serious diseases, like cancer. One example of this is a sugar that is able to cause cancer cells to die.

The sugar isn’t the same kind that makes cookies or lemonade taste good. It’s a different kind, made by a mushroom called Antrodia Camphorata. This sugar causes the cell membranes of cancer cells to fall apart. The cell membrane is like a bag that holds all of the cell’s insides together. When this membrane starts to fall apart, a cell will quickly die. 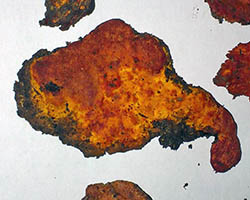 Antrodia camphorata is a special mushroom that makes a sugar that can kill cancer cells. Click for more detail.

This mushroom medicine sounds great, but using it to treat cancer isn’t as simple as measuring out the right amount of it into a pill. Cancer cells come from the same cells that make up the rest of the body, so a lot of medicines can’t tell the difference between healthy cells and cancer cells very well.

As a result, people taking these medicines may start to feel very sick or lose their hair because it hurts their normal cells a little too. When scientists make new cancer medicine, it is really important that it can find the cancer cells in a body and only attack them.

Right now cancer medicines affect all cells, so the scientists who wrote this article wanted to find a way to make medicine go only to cancer cells. Scientists hoped that a new medicine delivery system could be used to fix that problem, sending the medicine to whichever part of the body it needs to go to.

In this experiment, scientists tested a new way to deliver the cancer-fighting sugar straight to cancer cells using a technology called nanoparticles. Nanoparticles are little tiny balls that are much smaller than cells. 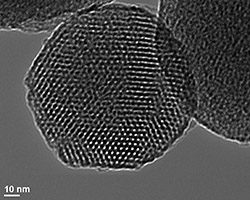 These are silica nanoparticles. The scientists modified these particles to find and attach to cancer cells. Click for more detail.

The ones used in this experiment were made out of silica. Silica is very common in nature and living things so it can travel inside the body without causing harm. These nanoparticles also have holes in them that scientists packed full of the cancer-fighting sugar.

Putting Nanoparticles to the Test

Scientists tested these sugar nanoparticles on cells that were taken from a liver cancer tumor and grown in the lab. Scientists use cells like this to test new medicine because they don’t know if it’s going to work. If the medicine doesn’t work like they planned in the lab tests, it is never tested in any other animals, including humans. 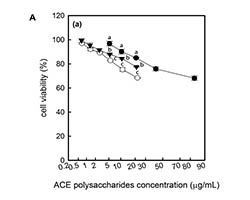 This graph shows how nanoparticles with the mushroom sugar affected the cancer cells' ability to live (called viability). Click for more detail.

Overall, sugar nanoparticles were good at finding and killing liver cells. In the future, scientists plan to test whether these nanoparticles can help treat whole tumors rather than just individual cancer cells. If this new method for delivering treatment to cancer cells continues to work, doctors can begin using it to treat people with liver cancer. 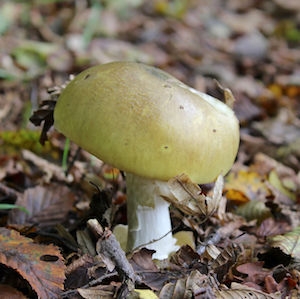 Some mushrooms, like this "death cap," can be deadly if people eat them. But other mushrooms have healing properties that scientists are trying to use to fight diseases.

What other organisms are used to make medicine? Learn about some of them in our story on medicinal plants, Nature's Medicine.