Annual plant: a plant that grows and flowers over multiple seasons or years before dying......more

Perennial plant: a plant that grows and flowers in one season before dying......more

Phenology: the timing of seasonal plant and animal life cycles and activities.

Temperate climate: a climate in which conditions are moderate throughout the year, without extreme hot, cold, wet, or dry periods.

Urbanization: The process in which humans gather in a common location and develop the environment. For example, creating roads and buildings is urbanization... more 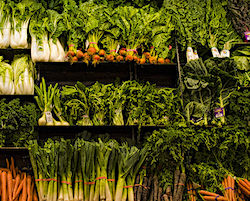 If we only ate produce that was grown nearby and was in season, we would have far fewer options at the grocery store. Image by Liz West.

When humans get hungry, they head over to the nearest grocery store and buy whatever food they feel like. But what do bees and butterflies do when they get hungry?  Without any grocery stores of their own, they have to find their food in the flowers that bloom in the wild. However, since their favorite flowers don’t grow year-round, finding food can be hard. To make matters worse, the flowers they like to eat don’t have a lot of room to grow with all the cities in the world expanding and taking up more space. If you live in the city and you’re wondering how to help the bees, butterflies, and other pollinators, you aren’t alone. Scientists tried to figure out the answer in the PLOS Biology article “Food for Pollinators: Quantifying the Nectar and Pollen Resources of Urban Flower Meadows.”

Where do Pollinators Get Their Groceries?

In the US, we can’t grow fruits and vegetables year-round, because we live in a temperate climate. That means we have seasons, such as winter, when it gets too cold for certain plants to grow.  But come December, when you and your parents go to the grocery store, you can still buy bananas. So, where are all of these fruits and veggies coming from? They don’t just magically appear on the shelves. In the US, we import, or buy and ship in these foods from warmer places, such as Mexico, where they grow year-round. 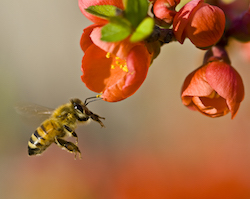 Honey bees search out flowers to pollinate, but can have a hard time finding them in big cities. Image by Louise Docker.

Pollinators don’t have it so easy. They have to figure out what to eat and when to eat it depending on the seasons. For example, pollinators like bees, flies, butterflies, beetles, bats, and some birds need to figure out when certain plants that they like are going to flower, so they can forage, or find the food they depend on: pollen and nectar.

Pollinators in the Big City

In temperate places, plant and pollinator phenology depends on the changing of the seasons. Oftentimes, the cues for this changing season is a change in temperature. Because of this, phenology can be very sensitive to climate change and human activities, such as building cities that store more heat. Scientists started noticing that as the human population has grown and built bigger cities, people have destroyed and affected a lot of natural habitats. 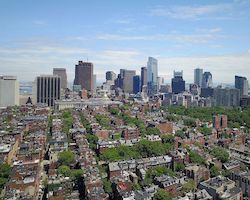 Urbanization reduces the number of nearby pollinators. Click for more detail.

Now there seem to be less pollinators around. Many scientists have started studying why urbanization, or the growth of cities, is reducing the number of nearby pollinators. They are finding that cities have fewer types of plants that pollinators like, that pesticides used for farming are hurting pollinators, and that climate change affects plant and pollinator phenology. These things combined are very bad news for pollinators, for the plants that depend on them, and for us humans who like to eat the fruits and veggies that come from these plants.

Some people have tried to fix the problem themselves by replanting natural habitats in open spaces in cities. For the most part, people add pollinator-friendly plants to their gardens and meadows, but people also establish new gardens in their yards or on their roofs, start beekeeping, or make special homes ("pollinator hotels") to help prevent pollinators from leaving. Creating these spaces is kind of like planting grocery stores and building homes for pollinators. Unfortunately, we’re not sure if these gardens provide the best food for pollinators at the best times. Scientists have been studying what people are planting in pollinator gardens to make sure it is actually helping. 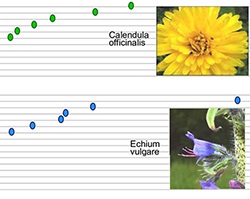 Scientists in the United Kingdom set up experimental urban meadows in four different cities. They planted mixes of perennial plants and annual plants in each place in 2012. Then, one year later, they measured when the plants flowered and how much food (nectar and pollen) they provided to pollinators during an entire season. They found out that the perennial plant mix provided more food for longer, but that both mixes did not provide food throughout the whole pollinator foraging season since most of the plants flowered at the same time.

These scientists figured out that while these pollinator gardens are a step in the right direction, they aren’t the best they can be for pollinators. Essentially, these pollinator grocery stores don’t provide the best food reliably all season, but instead produce a lot of food all at once toward the middle of the season, which leaves some pollinators hungry and makes others have to leave in search of food during the other parts of the season. If our grocery stores only offered different types of fruits and vegetables for one month a year, we’d be pretty unhappy, too. Pollinators that can store food, like honey bees that store honey, may be able to handle seasons with lower nectar availablity. 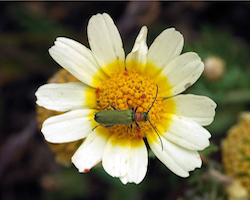 If you plant a pollinator garden, make sure to choose diverse plants, and try to stick to locally native plants as much as possible. And remember, honey bees aren't the only pollinators that need your help. Click for more detail.

Overall, these scientists suggest that we need to think harder about which plants we plant for pollinators in urban gardens and meadows, to make sure that there are enough different kinds of plants to provide lots of high quality food throughout the whole pollinator foraging season. As the human population grows, so will our cities, and more natural habitats will be damaged or destroyed. Due to that fact, we need to start thinking of better ways to live in cooperation with plants and animals, so that all of the species and nature we need and love, like pollinators, don’t disappear. 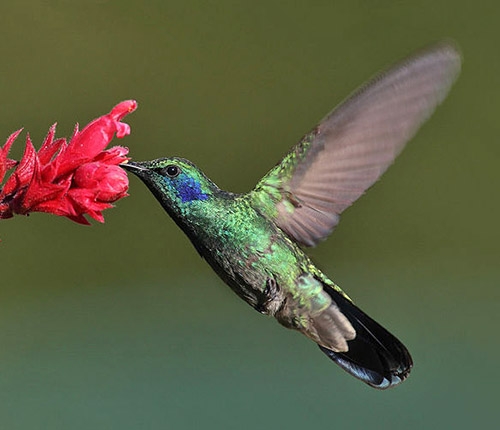 In urban areas, we need to try harder to help out our pollinators, such as bees, flies, moths, butterflies, hummingbirds, and bats.

Food for Pollinators: Quantifying the Nectar and Pollen Resources of Urban Flower Meadows
Learn how to read a scientific article