Life Cycle: the sequence of all stages through which an organism passes - going from egg to adult. 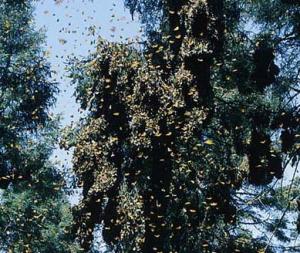 Thousands of orange and black shapes flutter through the trees. They carpet the ground, making walking difficult. As you look up, so many of them hang from the trees that the branches bend under their weight. Welcome to one of the few wintering homes of the monarch butterfly.

During the summer, millions of monarchs live in southern Canada and the United States. In September, the adults prepare to migrate. They form huge flocks, just as some birds do. Moving between 10 and 15 miles a day, the flock eventually reaches its winter home in one or two months, depending on how far it has to fly.

Of course, the people in towns and villages near the wintering grounds knew that the butterflies were there all along. No one else had asked them before. 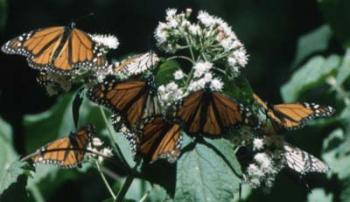 Monarch butterflies stop for a sip of nectar.

Male and female monarchs begin mating in their wintering grounds. The females lay up to 3 eggs on the underside of milkweed leaves that they find as they return to their summer range. The newly laid eggs hatch into hungry larva that eat and eat.

The plant foods that larvae and adults eat are very different. Monarch larvae only eat the leaves of plants in the milkweed family. Adult butterflies are much less choosy. They will sip nectar from many different kinds of flowers. 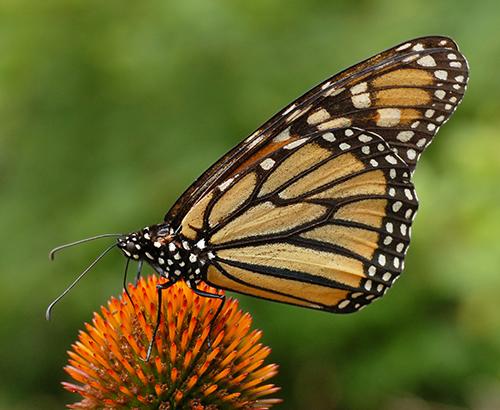