Prey Pretend to be Predator

Lure: the act of attracting something; or anything that is used to attract an animal. For example, fisherman lure fish toward them by using lures that looks like insects.

Predator mimicry: a special kind of mimicry (looking like another organism) in which one a prey organism looks or behaves like their predator.

The spider crawls along the branch, inching its way silently toward the moth. It dips and moves between overhanging leaves, and shifts to the underside of a branch. The eight-eyed, eight-legged hunter moves unseen closer and closer to the moth. From here, it moves back to the top of the branch. It then launches itself into the air, landing on and biting into the flesh of its prey. The moth never saw it coming. 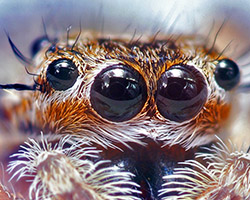 Jumping spiders have four sets of eyes to help them spot prey. Click for more detail.

Life is tough for many animals, especially animals that are prey. Predators are always on the hunt, searching for prey to eat. To avoid becoming dinner, prey have some interesting ways to escape capture. Some animals have warning coloration to show that they are toxic. Others try to hide by blending into their environment. But what strategies can animals use to stop being eaten by predators like jumping spiders? In the PLOS ONE Article, “Predator Mimicry: Metalmark Moths Mimic Their Jumping Spider Predators”, biologists discovered a species of moth that looks oddly like their jumping spider predators.

Jumping spiders have many abilities that make them great hunters. Some can see 40 body lengths into the distance. They also have 360-degree vision. As their name suggests, jumping spiders can jump up to 50 times their body length. Most spiders build webs to catch prey, but jumping spiders do not rely on webs. Instead, they use their eyesight and jumping ability to pounce on prey. What can the prey of jumping spiders do to prevent being eaten?

A Moth in Spider’s Clothing 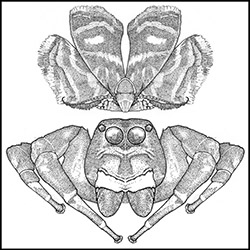 Here is a drawing of the metalmark moth (top) and their jumping spider predators (bottom). Click for more detail.

Biologists have noted that metalmark moths of the genus Brenthia sit upon leaves and twigs. This is dangerous for normal moths, because predators can easily spot them. However, these metalmark moths sit in such a way that resembles their jumping spider predators. The moths do this by putting their wings in an odd position. Biologists thought that jumping spiders might get confused by the moth’s appearance. This might distract the spiders into thinking it is being threatened by another spider. The moth could then fly away from the distracted spider.  If moths are mimicking their jumping spider predators, this would be an example of predator mimicry, which is rare. Predator mimicry is when a prey organism looks or behaves like one of its predators.

Observing a similarity between the moths and the spider’s appearance was not enough to convince scientists that these moths are fooling their predators with predator mimicry. Therefore, an experiment was needed to further investigate the scientist’s observations.

Dancing with Your Food 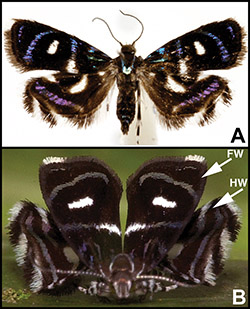 The researchers gathered four species of the Brenthiamoths that they thought might be mimicking jumping spiders. They also gathered other moths that were of similar size and were not thought to mimic jumping spiders. These moths were used as a control during the experiment. Scientists use controls as a reference to compare to their other results.

The researchers collected 158 jumping spiders for their experiment. They placed each spider inside its own plastic container. Later, they added a moth to each container and recorded the spiders’ behavior using a video camera. Four specific behaviors were recorded each time it occurred. One behavior is the “stalk” which involves a spider slowly walking towards the moth. The “pounce” behavior was noted anytime a spider jumped toward a moth to capture it. The third behavior called “catch” occurred when a spider successfully captured a moth. The last behavior was “display”. Display behavior is when a spider raises its front legs and waves them around. Spiders do this display dance to intimidate other spiders. Display behavior should only occur when a spider sees another spider and tries to scare it away.

The researchers observed the behavior of spiders when they were introduced to either a Brenthia (presumed mimic) moth or a normal (control) moth. If the Brenthiamoths are jumping spider mimics, the researchers predicted that many spiders would produce “display” behaviors. This would show that the spiders are being fooled into thinking that the moths are other jumping spiders. This could then be compared to the spider behavior when they were introduced to a control moth. The scientists predicted that the spiders would never display to a control moth.

After observing the many interactions from video footage, the researchers concluded thatBrenthia moths were more likely to be displayed to. This means that many of the spiders thought that there was another spider in the container, even though it was a moth! Interestingly, the researchers also observed the Brenthia moths move around in a very rapid and twitchy way. This is thought to add to their disguise by moving around in a fast manner like the jumping spiders.

In this table, we can see what behaviors were observed when presumed mimic (metalmark moth) or control moth (another non-metalmark moth) was placed into a container with a jumping spider. Click for more detail.

How Common is Predator Mimicry?

Mimicry can be used in many interesting ways. For example, Anglerfish have “lures” that dangle off their heads to attract prey. The lures sometimes look like wiggling worms. Other lures are extremely bright and attract curious fish. These anglerfish trick prey into coming close to them, so they can catch an easy meal. 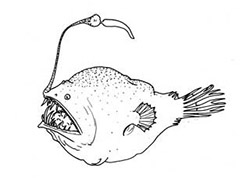 This illustration shows an anglerfish with a worm-like lure dangling above its head. This lure attracts fish for the anglerfish to eat. Image by Apokryltaros.

Anglerfish lures are examples of prey mimicry because the lure mimics a prey organism. However, in the current study, the researchers found a rare example of predator mimicry. This experiment demonstrated that Brenthia moths use both their appearance and behavior to fool the jumping spiders into thinking that they were another spider. Many biologists are interested in discovering whether other animals use predator mimicry. Can you think of other prey that may disguise themselves as predators? 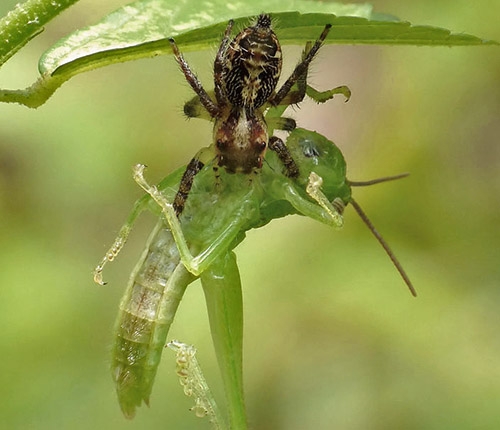