How teams work together in a network can lead to success on the basketball court.

There is the sound of the ball bouncing on the hardwood floor. A blur as it is passed from one player to the next. A shot is taken, the basket made or missed. This is the back-and-forth world of basketball where one team wins and another loses.

What is it in this maze of passes and shots that makes the difference between a team that wins and one that does not? While weekend sports experts and living room fans debate the pluses and minuses of particular teams, there is a group of scientists who have a new idea on measuring team behavior and success.

In the PLOS ONE article, “Basketball Teams as Strategic Networks,” Jennifer Fewell and her own team of scientists have studied how players work together to move the ball across the court.

For Fewell’s team, a game is more than a game – it is a collection of patterns and connections between the players. As they studied basketball teams more closely they began to see a network emerge.

Whether you know it or not, you are part of many networks. Networks show connections between people. Who talks to you? With whom do you work and play?  Who are your teachers? Your friends? These connections all represent different kinds of networks. 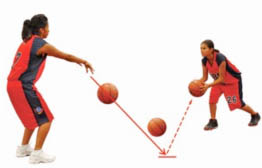 When studying teamwork, we can connect the pattern of teammates' interactions to a measure of performance.  How does the group work together?  What properties of team interactions make the team more likely to succeed in achieving its goals?

To study this, scientists in the Fewell lab measured the interactions between basketball players during the 2010 NBA playoffs by looking at who passed the ball to whom on each team. They studied 16 teams in 8 matchups, with 2 games per matchup. As they watched each game they recorded every time the ball was passed from one player to another, as well as the outcomes of the plays (a successful shot, for example).

How can we study the interactions in the different teams?  The simplest way is to connect the players with arrows, which represent the ball being passed from one player to another. Below are two diagrams Fewell’s team created to show how basketball players passed the ball to each other on the court.

Looking at the figure, you can see that the network and pattern of interactions between players are different for different teams. One team (the Chicago Bulls (A)) has a star-shape pattern, with all arrows coming from a single player. The other team (the Los Angeles Lakers (D)) has many triangles connecting three different players. How are these patterns associated with the success of the team and their ability to score points or control the ball?

Who Controls the Ball? 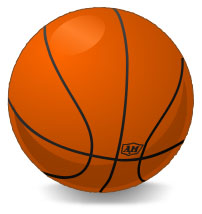 The star-shape network shows that a team relies heavily on one person to move the ball across the court. This is the case of the Bulls (A), which shows a star pattern from the point guard (PG). The point guard controls who gets the ball.

What would happen if the Bulls’ point guard was eliminated from the network – what interactions would remain, and how would the performance of the team as a whole be affected?

If the point guard was eliminated, much of the network would be completely gone, and the team would not function. In contrast, eliminating the power forward (PF) or small forward (SF) would not strongly impact the team’s ability to score.

The point guard is a central point of control in this team, and the team performance strongly relies on this individual, so we say that this network is very centralized.

Does a Single Player Control the Ball?

What would happen if the Lakers’ power forward or small forward were eliminated from the network? What about the point guard?

The team performance does not rely on a single individual, and the control of the ball is more evenly shared among the team members.

For this reason, the network is distributed. Because each player frequently passes the ball to multiple other players, the team is more flexible and less predictable.  A team with a distributed network has many options for changing their strategy to score points and keep the ball from the other team during the fast-paced game.

Based on the analyses from the 16 different teams, Dr. Fewell and her group found that the teams with less centralized (more distributed) interactions were more likely to win, possibly because they are more difficult to guard.

Who Contributes to the Team Performance?

For a team to work effectively, you need to know how a player works with other players, and how this relates to success of the team as a whole.

To study this, Fewell and her team measured how often a player touched the ball during an offensive play, and whether that play was successful or not (led to scoring points or not). She found that different positions contribute differently to overall team performance. For example, the center position receives the ball less frequently than the point guard position, but when a play involves the center position, it is more likely to score points. In contrast, the point guard receives the ball very frequently, and is involved in both successful and unsuccessful plays.

The Game and Beyond

In basketball, each team member has a specialized role, but they must work together through teamwork for their team to win. Fewell's study of basketball found that teams have different patterns of player interactions and teamwork strategies – or different network patterns (centralized vs distributed). This work could be used to study basketball team play to change the patterns of interactions of the players. Understanding the network of a team's plays could also help the team be more successful!

Beyond the basketball court, think about your role in your different networks, whether with friends, family, or classmates. To whom do you “pass the ball”? With whom do you work to achieve a result? What is your role in these networks? Networks are everywhere. Networks and teamwork might be improved using just a little science and some careful observations.

Networks are everywhere and everyone is part of many networks in their life. Your family works as a network. You and your schoolmates are a network. When you work you are part of a network. These are only a few of the many networks both large and small in our lives. Try thinking of all the networks that are part of your life.

Be sure to listen in as biologist Jennifer Fewell talks about the work her team did studying basketball team play and networks in the companion podcast - Ant Life Part 2.
Basketball Teams as Strategic Networks
Learn how to read a scientific article