Are there really green aliens?

What do you think of when you hear the phrase “life on other planets?” Television and movies have taught us to associate these aliens with little green men or maybe a friendly Martian, but the search for life on other planets is far from science fiction. Have you ever wondered how scientists are trying to find life on other planets? What do they look for and how do they know when they’ve found it? The PLOS Biology article, “What Is Life—and How Do We Search for It in Other Worlds?” discusses just that.

A Guide for Looking for Life

Mars (top) and Europa, one of Jupiter’s moons (bottom) .

To find life on other planets, scientists first need to decide: What is life?

All life (as we know it) is made up of four microscopic components: sugars, fats, proteins, and nucleic acids. All living things also have DNA, but the genetic information is different for each living thing. Living things also have certain elements in common like carbon, nitrogen, sulfur, and phosphorus.  Sugars, fats, proteins, nucleic acids, DNA, and the core elements are all known as the “building blocks” of life. These “blocks” are all found in cells that make up living organisms.

*Movement can be either large or small, such as flexing a muscle or the microscopic movement of cells in response to the presence of food.

However, it is liquid water that is one of the most important compounds for supporting life. Liquid water is also one of the hardest things to find on other planets, so scientists tend to focus their search for life on planets that may have water.

In the 1970s, scientists used the Viking missions to Mars to test if life was even possible on the surface of Mars. One of these tests was called the “Gas Exchange” experiment, in which air was released after the soil was wetted. The test didn’t share any good news. After testing the soil, scientists didn’t find any signs of life. Mars is much hotter and drier than Earth, so one explanation scientists gave was that hotter weather would make water harder to find, and that Mars might be too dry for life to live there. 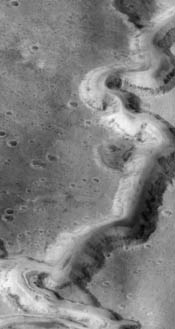 Satellite photo of a canyon on the surface of Mars.

Despite the disappointing tests from the 70s, scientists continue to look for water on the surface of Mars. Sometimes it pays off. A satellite photo of a canyon on the planet Mars is the best evidence we have of liquid water anywhere outside of Earth. It takes slow moving liquid a very long time to create a canyon like the one shown in the photo. Recently, scientists made an even more exciting discovery. Ice was found on the South Pole of Mars, in an area that has never been touched!

Mars is not the only planet where scientists are looking for water and possibly life. One of Jupiter’s moons, Europa, may also be watery. Europa is very far away, so scientists have to observe how it moves through the solar system to try to figure out what materials are on it. Scientists think Europa may have a large body of water because it creates a disturbance as it moves through Jupiter’s magnetic field. The disturbance is similar to what happens when you walk through a metal detector with coins in your pocket, but on a much larger scale.

In addition to searching for water, scientists are also looking for life based on the “Lego Principle.” Like Lego blocks, the “building blocks” of life on Earth are only made from a certain set of pieces. It may be true that life on other planets is limited to the same building blocks that are used here on Earth. Scientists think that by taking samples from places like Mars and Europa, they can see if the “building blocks” of life exist on other planets. Scientists think the Legos may fit together similar to how they do on Earth, but it is possible that they may fit together in a way that is out of this world.

Scientists are anxious to collect samples from both Mars and Europa to test the Lego Principle. On Mars evidence of life may be buried under many layers of ice, and on Europa there are dark spots where the “building blocks” of life may have accumulated. If scientists keep looking, they may just find proof of life in outer space. It's pretty likley though, that life in outer space may look a little different from the aliens we see on TV and in the movies.

Places to learn more about this topic: 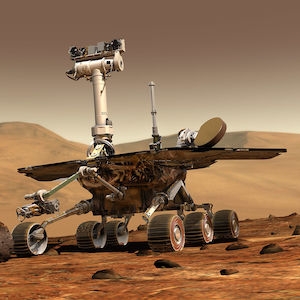 Scientists have explored far away planets, like Mars, using robots and satellites to look for life. Illustration of what the Mars rover might look like during an expedition.
What Is Life—and How Do We Search for It in Other Worlds?
Learn how to read a scientific article