Imitate: to copy or act like something or someone else.

Infiltrate: to secretly get access to a place or thing.

Playback Experiment: an experiment used to see how an animal acts when a sound is played for it. 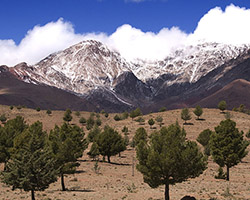 In the High Atlas Mountains of Morocco, there is a small, heavily guarded underground society. Members of the society “talk” in a secret code. This allows them to recognize intruders and remove them from their home. To join the society, you'd have to be able to produce the same smell as those who live in the society. You'd also have to produce a special sound with your hands. What's more, there are three separate groups in the society and you would have to match the smell and sound of all three groups at the same time.

Sound too hard? Well, there is one invader who has mastered their language, and even more. In the PLOS ONE article titled, “The Pied Piper: A Parasitic Beetle’s Melodies Modulate Ant Behaviors”, this tale of deceit is explained through careful scientific investigation.

A Stronghold of Ants

One by one, hundreds, thousands, or even millions of ants work together to create a colony. They dig deep into ground, create winding tunnels, rooms, and chambers throughout the colony nest. They gather pounds and pounds of food to feed themselves, to feed growing young, and to store for when food is hard to find. With such precious resources in an ant colony, it's no wonder ants defend them so fiercely. 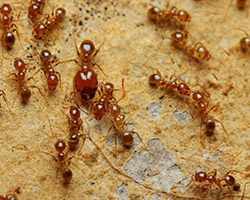 Ants use chemicals and sounds to spread information. Click for more detail.

Soldier ants attack invaders who try to steal these resources. Since the colony is underground, it is completely dark. Thus, ants use chemicals to spread information to each other. They might tell each other where food is, or if an intruder has entered the colony.

In addition to chemicals, scientists have found that ants also use sound to spread information. The ant species, Pheidole pallidula, makes sound by rubbing two sections of its abdomen together.

To fool these ants, an invader must imitate both the chemicals and sounds that ants make. This makes it hard for other insects to survive in the colony before a soldier ant finds it. But if an invader can break in and take advantage of the colony's resources, it’s well worth it. 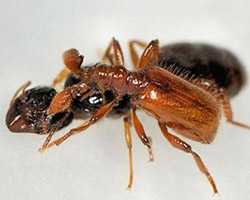 Ants in these colonies use chemical and sound cues to share information, but there is one species of beetle, Paussus favieri, which has been observed to live within these colonies.

They feed on larvae and adult ants and interact with the queen...all without any aggressive response from the ants. Basically, the beetles are treated as if they were royal ants! So, how do these “spy” beetles trick the ants?

Using Our Ears to Find the Spy

Scientists predicted that the spy beetles must have evolved a way to mimic the ant chemicals and sounds. This would allow them to invade ant colonies and even eat ants and larvae without being kicked out. In order to test this prediction, scientists travelled to Morocco to collect both the ants and these spy beetles. 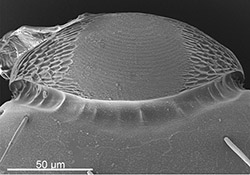 They kept the ant colonies in man-made nests, along with the beetles. They took very detailed microscopic images of the organs that each organism uses to make sound to see how similar the sound-producing organs were between species.

They also recorded the sounds that ants and the beetles make with these organs. The sounds made by each of the three main castes within the colony (workers, soldiers, and queens) are different, so they recorded all three of the sounds.

When ants from this species make sound, it occurs in pulses. The researchers measured how long the pulses were, how often they were made, and how loud each pulse was. They compared these values to the pulses that the spy beetles make, and found that the sounds were very similar. 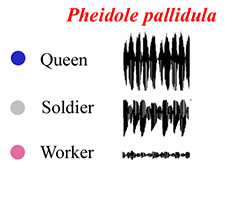 The sound pulses of each caste from the ant species Pheidole pallidula. Click for more detail from the original graph.

In the end, the researchers showed that the beetles do mimic the sounds of these ants, even though they use different organs to make the sounds. This observation was supported by the way the ants behaved when the researchers played the beetle sounds through speakers. The researchers used all of these experiments to create a better picture of how the spy beetles use sound to live within ant colonies.

Are There More Miniature Spies?

The research into this beetle-ant mimicry has taught us more about the ways ants guard their colonies, as well as how invaders such as P. favieri beetles infiltrate them. Further research on sound mimicry in ant colonies may unearth more invaders who use these signals to prey on the resources ant colonies provide. This research helps scientist understand how some insects need other insects to survive.
Additional images via Wikimedia Commons. Beetle-ant interaction by P. Mazzei. 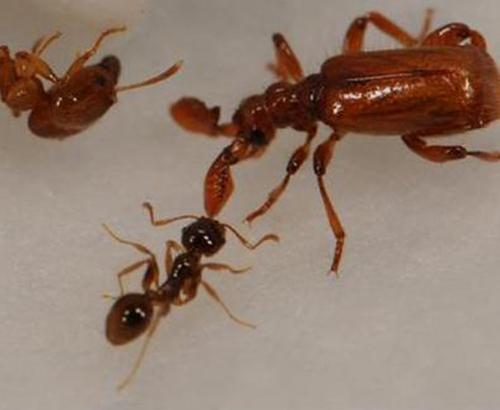 Here, a "spy" beetle interacts with an ant.
The Pied Piper: A Parasitic Beetle’s Melodies Modulate Ant Behaviors
Learn how to read a scientific article