Urban heat island: an urban (city) area that is much warmer than natural areas around it; this is due to humans modifying those areas with buildings, freeways, and more...more 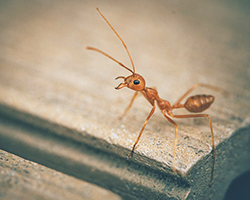 Sometimes in hot cities, ants may seem to be the only non-human animals you can find. Image by Loc Nguyen via Pixabay.

While eating a cold treat on a hot summer day in the city, you notice there is not much animal activity around you. In fact, aside from a few birds, the only movement you see is a trail of ants, marching tirelessly near your feet.

Ants are a familiar sight – these ladies (yes, most ants you see around are female) have managed to make a living in even the biggest cities. Many of us have seen ants in either our homes or at our picnics, looking for dropped food. Some of us have even been stung or bitten after standing too close to their homes.

But seeing them on such a hot day has you puzzled, especially given the fact that the concrete is almost scalding to the touch. Hot cities could be a major problem for some species... but maybe it helps others get used to the heat. In the article "Urban physiology: City ants possess high heat tolerance," scientists tested how well city ants can handle the heat (and the cold).

Major cities are usually hotter than rural areas for several reasons. One is that cities actually make and hold a lot of heat. All the machinery and appliances found in cities can really warm things up. And the bigger the city, the more heat it produces. 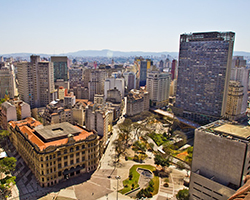 With so much metal, asphalt, and concrete, it’s no surprise that São Paulo, Brazil can get so hot. Image by F J Jarabeck.

Large cities usually have lots of buildings and roads that are particularly good at trapping and holding on to heat. Metal, concrete, and asphalt absorb and release more heat than soil and vegetation. Because of their ability to trap and slowly release heat, cities can still be uncomfortably warm long after the sun goes down.

Big cities with tall buildings can also block the wind. As anyone who has ever eaten hot food can tell you, blowing on hot things can cool them off faster. But if the buildings are too tall, the wind is blocked and can’t cool the city down.

Another reason cities are hotter than rural areas is that cities usually have less vegetation. Vegetation is particularly good at keeping an area cool, because it can act as an air conditioner. When plants heat up, water is pulled out of their leaves, taking with it large amounts of heat. The heat and water from the plants then travel up into the atmosphere and away from the area. 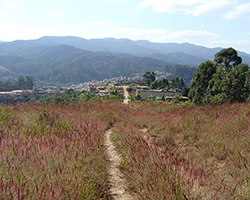 Soil and vegetation hold much less heat, making rural areas outside of São Paulo, Brazil much cooler than the city. Image by Silvio Emanuel Fernandes.

Unfortunately, cities often have much less vegetation to cool things down. All these reasons can make a big difference in how hot cities can get. For instance, the largest cities on our planet can be up to 12°C (~21°F) hotter than nearby rural areas. No wonder they are called “urban heat islands”!

Adjusting to the Heat

If a new environment isn’t too stressful to live in, organisms can adjust how their bodies work to better tolerate the change. So, we would expect that an animal that has lived in a warm place would be better at dealing with the heat, but worse at handling the cold. Knowing that large cities get hot, we can study the animals that live there to learn how they deal with the heat, and how they change to live in these hotter places. 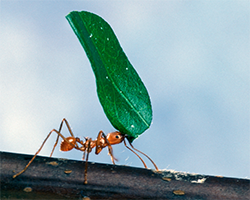 Leaf-cutter ants must collect a constant supply of leaves and twigs to grow enough food to survive. This forces them to forage (look for food) even when it’s hot outside. Pictured above is a worker carrying a cut piece of leaf back to its colony. Image by Scott Bauer, USDA.

For this study, scientists used leaf-cutter ant workers. They wanted to see how well ants from inside the city of São Paulo, Brazil dealt with the heat and cold compared to ants from outside the city limits. These ladies were captured on their trip back to their colonies while carrying leaves and twigs to feed to their fungal gardens.

Who Can Handle the Heat?

To test if living in a hot city makes ants better at handling the heat, researchers exposed the ants to a hot air temperature (42°C, or 108°F). Scientists measured how long the city ants and the rural ants could walk around at 42°C before falling over and dying. This they called the ‘knock-down temperature.’ (Though it’s not good to kill any animals if you don’t need to, this was to help answer an important question.)

Scientists were also interested in seeing if ants that live in a hot city were worse at handling the cold than rural ants. To measure this, researchers chilled the ants (to 0°C, or 32°F) until they stopped moving. Then, they recorded how long it took the ants to get up and start walking around again. 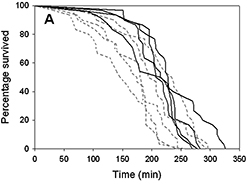 This graph show how well city ants and rural ants survived when they were exposed to hot conditions. Click for more detail.

The researchers found that ants from São Paulo survived in the hot air 20% longer than their countryside relatives. That means that the ants from the hot city were better able to handle higher air temperatures than ants from cooler, rural areas. Surprisingly, ants from both locations were just as sensitive to the cold.

Big cities are their own experiments that can help us test how animals might do in a warming world. These places can show us whether these animals have what it takes to survive in a changing climate. 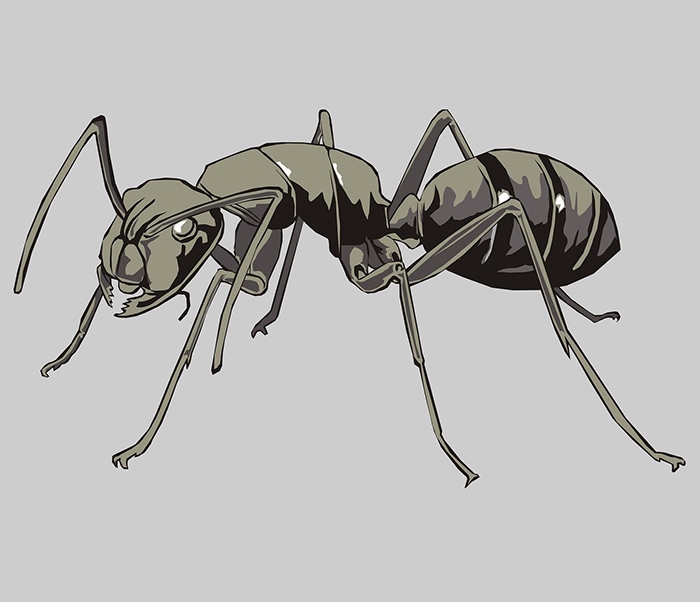 Can ants help us learn how animals might be affected by the warming of our cities and our world?