Element: in chemistry a substance that cannot be broken down (separated) by a chemical process... more

Where Does a Plant's Mass Come From?

Have you ever wondered where plants get their mass? All those leaves and branches have to come from somewhere, but where? It turns out that the main ingredients for plant growth are water, air, and energy.

Where plants get their mass.

The Story of Air

The molecule carbon dioxide is made of one carbon atom and two oxygen atoms.

The air around you may seem empty, but it's not.

Air is made of tiny bits that we call molecules. If you had enough air molecules, you could even weigh them.

Two of the molecules in air are oxygen and carbon dioxide. You may think oxygen is the most important molecule—we need it to live. But carbon is important too. All living things on Earth are made of carbon.

If you removed the water from our bodies, you would find that carbon makes up most of the rest of our weight, or mass. The same is true for plants.

Plants don't get carbon from any of these sources.

Plants pull carbon out of the air.

Are Plants Made from Thin Air? 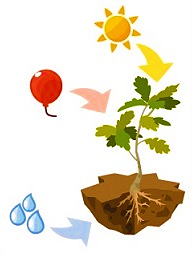 Plants need energy from the sun, water from the soil, and carbon from the air to grow.

Air is mostly made of nitrogen, oxygen, and carbon dioxide. So how do plants get the carbon they need to grow? They absorb carbon dioxide from the air. This carbon makes up most of the building materials that plants use to build new leaves, stems, and roots. The oxygen used to build glucose molecules is also from carbon dioxide.

Water is another important material plants need to grow, and they get it by absorbing it through their roots. Water is made of two hydrogen atoms and one oxygen atom. The hydrogen in water is used to help build glucose molecules.

A plant can be up to 95% water. Think of the water as the filler they use between carbon structures. If we take away the water from a plant though, and look at just the dry material, a large majority of that material comes from thin air.

Plants also need tiny bits of vitamins and minerals to grow properly, which they get through their roots.

Plants need a lot of energy to take care of their cells and to build new ones so they can grow. Plants get their energy from the sun.

Plants absorb carbon dioxide through small openings called stomata that are on the surface of the leaf.

If we zoom in on a plant leaf, so close that we can see the cells, we'll find tiny openings called stomata. Stomata are holes made from spaces between special cells. These holes are where plants absorb carbon dioxide from the air.

Once inside the leaf, the carbon dioxide can enter plant cells. Inside the plant cells are special cell parts called chloroplasts, where photosynthesis takes place. 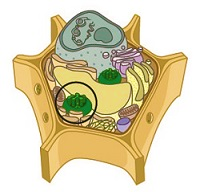 Circled inside the plant cell is one of hundreds of chloroplasts that live within the cell.

Plant cells look green due to molecules in the chloroplasts that reflect green light. There are many, many chloroplasts in every green plant cell. Most of the rest of the cell usually looks clear.

In the chloroplasts, carbon, oxygen, hydrogen, and energy are used to make a sugar called glucose. The whole process of making glucose is called photosynthesis.

Molecules of glucose join together to form cellulose. 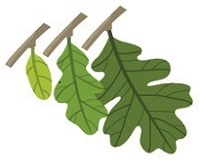 As more cells divide, the plant's leaves, stems, and roots can grow larger.

These structures and the materials they hold are also built with water.

When new cell structures are built, cells can grow and divide, making new cells. These new cells make for new plant growth. This lets the plants get bigger.

So if you are creating a cookbook of life and want to include a recipe for plant growth you would add the following.

In order to grow, plants need water, carbon dioxide (from air), and energy from sunlight. Click the image for the full carbon story poster.

This section was contributed by Karla Moeller and Charles Kazilek. Images are by Sabine Deviche. 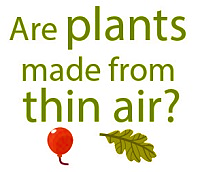 Check out our printable poster of the full carbon story.