DNA nanotechnology: the design and engineering of artificial DNA structures for a specialized use...more

If you were hanging out at a coffee shop, you might pull out your computer and check your email or do some work. But you probably wouldn’t do the same if you were at a nice restaurant. Our behaviors are often influenced by our surroundings, and the same is true for cells. 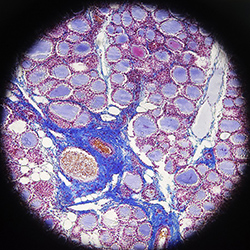 A cell’s behavior depends on the signals it gets from its surroundings, such as the extracellular matrix (ECM). The ECM is very complex and is a changing environment that different molecules move through.  Exactly what is in it, as well as the stiffness, are always changing in different areas and over time. The ability to make something similar, with man-made biomaterials, is a focus in many areas of biology.

In the bio-nano world, it’s especially important for tissue engineering. In tissue engineering, scientists need to be able to affect the whole cellular and tissue environment. That way, they can better control how a cell-of-interest responds. Aside from tissue engineering, a man-made extracellular matrix could also be used to make cells regenerate, to make tissues repair, or to fight the spread of cancer. 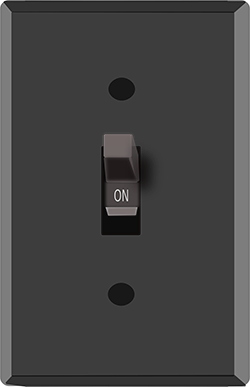 Some researchers are using DNA to modify biomaterials that were made to mimic the extracellular matrix. Ideally, it would enable them to control cell behavior, almost like an ON-OFF switch. Image by Clker-Free-Vector-Images via Pixabay.

So far, some researchers have made biomaterials with DNA, which has opened doors to new developments. But, many biomaterials that are built with DNA have been used more as a proof-of-principle. That means they are being used just to show it can be done. They haven’t been used yet in tissue engineering studies; but, key examples show the importance of DNA-based biomaterials to that field.

One in particular has allowed exchange of molecules that are involved in cell migration and cell growth. A material similar to the extra-cellular matrix was modified with DNA. Based on how the DNA interacted with other molecules, the material could change how the cell responded. This works sort of like an ON/OFF switch. Materials like this could let us control where cells go and what specific type of cells they become.

These examples show great control of cells and molecules, but what if we wanted a system that worked and could control itself? A new DNA-modified material was made that can act in response to input from the cells it surrounds. It can release special molecules based on the activities of those cells. A molecular cage carrying cargo attaches to a target cell, while also bound to the biomaterial. When the cells try to migrate or pull away from the cage, the cage straightens and releases the cargo. This is a bit different from other cages that respond to environmental change. Rather than responding to a general change in pH or temperature, it responds to physical signals from nearby cells.

Such materials avoid the need for responses at specific times. Instead, systems like this could be used as needed—for example, to help heal tissues whenever injuries occur.

These are just a few examples of how biomaterials built for a nanoscale can be used in tissue engineering. The field of bionanotechnology is relatively new, so our exploration of how DNA can be used in the field is still just beginning. 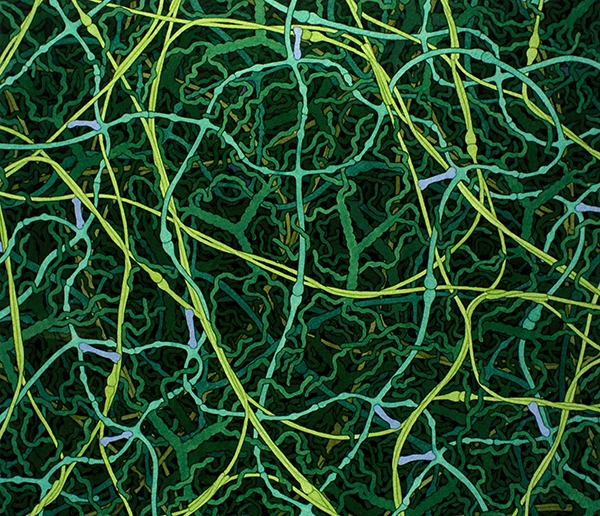 A beautiful illustration by David Goodsell of basement membrane, a support structure between body tissues. Basement membrane is a type of extracellular matrix that researchers are working to manipulate.