Gyre: a circular current that spins water around the ocean, like a spinning washing machine... more

Tilt-A-Whirl rides at amusement parks spin in circles while swinging up and down at the same time. These movements slosh water (and other fluids) around really well, which you may have learned from getting sick after riding one. Ocean currents are kind of like a Tilt-A-Whirl. They move ocean water around the planet and up to the surface then down to the ocean floor. This dizzying water ride is made up of two systems: surface currents and deep ocean currents.

As the Earth spins on its axis, surface ocean water shifts to one side, creating currents. Click for more detail.

Surface currents form 5 major ocean gyres between the continents. These gyres are named for the ocean basins, or sections of the ocean, that they form in: two each in the Pacific and Atlantic Oceans (one north and one south), and one in the Indian Ocean. 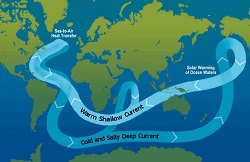 Some deep ocean currents are controlled by water temperature. Click for more detail.

The second type of ocean current moves water from the top of the ocean to the bottom. These currents move much slower compared to surface currents, and instead of starting at the equator they start at the poles. If you drop an ice cube into a very still glass of juice, you can watch from the side as the cold water near the ice grows heavy and sinks to the bottom of the glass.

Unlike the fast, isolated surface gyres, this deep ocean current travels all over the planet into every ocean basin. Eventually this cold water warms and is pushed to the surface where it starts the cycle again. Following this deep ocean current would be like riding a roller coaster that takes a thousand years from start to finish.

This roller coaster-like global conveyor belt connects the top and bottom of the ocean, which can be like two completely different worlds. Instead of thinking about the open ocean biome horizontally (from left to right), many scientists characterize this biome vertically (from top to bottom). This is because the open ocean is incredibly deep – over 2 miles deep in some areas. The environment changes quickly as you dive deeper and deeper into the open ocean. 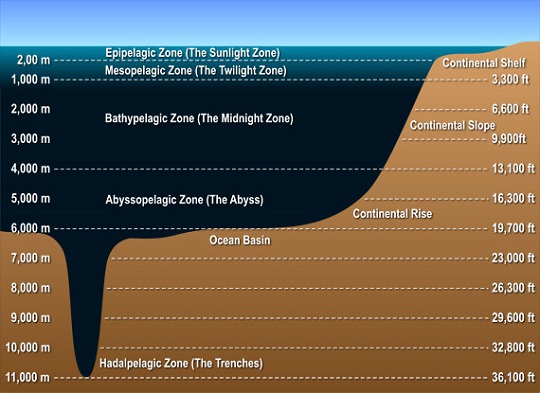 The vertical zones of the open ocean biome. Click for more detail.

The top section of the open ocean only goes down as far as you can see. This isn’t because the water is too murky, but because deeper down there is no light. Most sunlight can only reach down to about 500 ft (200 m), and all light disappears below 3,280 ft (1,000 m). Unlike in deeper water, in this zone (the epipelagic zone), algae can use sunlight to grow and animals can use their eyes to hunt. 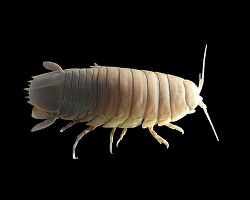 Many animals live deep in the ocean, like this foot-long giant isopod (related to the roly poly). Image by Lycaon.

Light isn’t the only factor that changes as you dive into the deep ocean. The further down you go, the saltier it gets. As you dive down, there is also less oxygen, the temperature drops, and water pressure increases, making life very hard.

If you tried to dive this far under the ocean, you would be crushed, so it’s hard to believe that any animals can survive this far down.

But many animals survive in this eternal darkness, along with fierce-looking fish specially adapted to this harsh environment, including some sharks.

This area is called the aphotic (or no-light) zone. Every night some of these fish and some invertebrates swim up into the more productive epipelagic zone where there is more food. 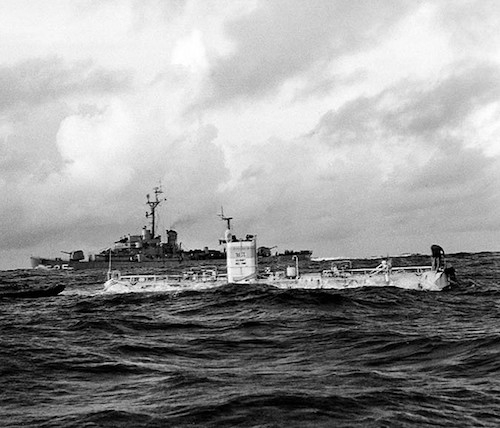 The vessel shown in front here, the Trieste, was the first vehicle to make it to the deepest part of the ocean, the Challenger Deep in the Mariana Trench.