Working Together in the Deep Sea 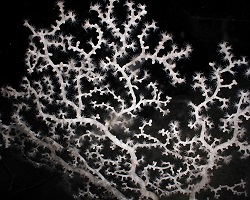 Corals are sedentary, meaning they stay in one place. Click for more detail.

In the marine biome, food is generally hard to come by. This is because most plants (which stay in one place and produce food regularly) cannot grow in the ocean. Much of the food in the marine biome comes instead from marine algae and phytoplankton. These tiny organisms can float around and spread to areas that have lots of sunlight and nutrients.

There are a lot of small fish and other predators out there eating the algae they filter out of the water. But what if you can't move to chase algal blooms around? Animals like coral that stay in one place have some more creative solutions to get enough food.

Corals survive using symbiosis. This is when two different organisms work together so that each species survives. Corals have a special relationship with algae. Instead of chasing after their food, corals keep algae inside their body. Coral skin is see-through so the algae inside can still turn sunlight into food. The algae share some of this food with the coral in exchange for a safe place to live. Sea fleas can't eat the algae if it is safe inside its coral castle. 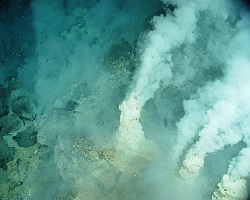 Hydrothermal vents at the bottom of the ocean support a whole web of life. Click for more detail.

But what happens when the water is too deep and dark for an algae cell to photosynthesize? You might think symbiosis would be impossible in the deep open ocean biome, and for algae to be involved, it is impossible. But other symbiotic relationships exist in some of the deepest habitats in the ocean: hydrothermal vents and cold seeps. These habitats couldn’t get further from what we usually think of as beneficial for life: they have never seen sunlight, the water is filled with poisonous chemicals, and water temperatures at vents are over 100°C (hotter than boiling water).

But the biggest difference between symbiosis in the shallow coastal biome and the deep ocean is that the producers don’t use sunlight to make food. Instead, the crabs, mussels, and worms near these vents and seeps eat special bacteria or hold it in their skin. 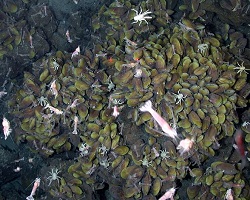 The diversity of animals at deep-sea hydrothermal vents is breathtaking. Click for more detail.

The bacteria can turn chemicals like hydrogen sulfide and methane into food. This way of producing food is called chemosynthesis because the bacteria make food from chemicals, not light.

These bacteria provide food to their hosts, allowing the invertebrate host to live and thrive in places no other animals could. Of course where you find worms and clams, you find predators. These ecosystems are home to all sorts of familiar life: crabs, sea slugs, octopus, and even fish.

There have been over 300 species found in these deep-sea habitats that haven’t been found anywhere else on Earth. In fact, the organisms that live in hydrothermal vents on opposite sides of the planet are more related to each other than their cousins at the surface. 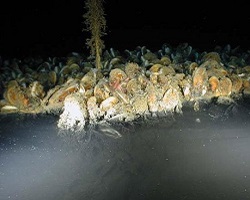 These mussels look like they are growing along the coast at sea level, but the "shore" they live next to is an underwater lake. Click for more detail.

These special bacteria are the basis of a whole ecosystem (one of the few we know about) that exists without needing light. These habitats are so unique they could possibly be considered their own biome.

However, bacteria that get food from chemicals don’t only live in the deep ocean. After scientists found the first hydrothermal vents in the 1970’s, they started looking for bacteria that chemosynthesize in other biomes – and they found them! Just think: we had to go to the very bottom of the ocean to learn about species that live around us every day. 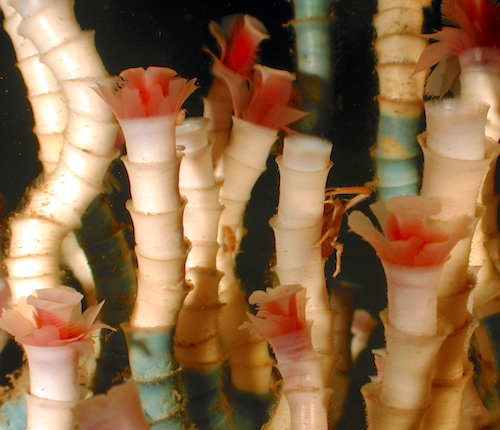 Many tube worm species live deep in the ocean. Some are important members of the ecosystems found near hydrothermal vents.