Filter: to remove specific material from a liquid, water, or gas by pushing the fluid through an object with thin holes or slits.

Frenzy: a state or period of time during which control is lost and excitement or wild behavior takes over.

Between a Rock and a Wet Place 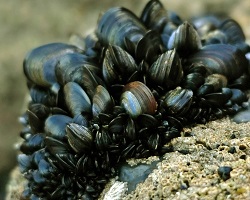 Mussels clamp tight to avoid drying out and to try to keep from being eaten. Click for more detail.

It may not seem like it, but the waters of the coastal biome are teeming with tiny critters. These organisms are so numerous that for many animals the ocean is one humongous bowl of soup.

There is so much food in the waters near the coast that some animals, like the oyster, don’t even need to move to find it. They just filter all their food straight out of the water.

We call these animals filter feeders.

Because they don’t need to move around, oysters latch onto hard surfaces like rocks. The oyster is stuck to its rock and can’t swim away when something wants to eat it. 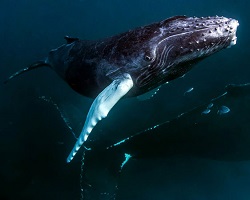 What do mussels and whales have in common? Click to find out.

When a predator comes to see if oyster is on the menu, the oyster clamps its shell shut with a strong muscle.

Locking itself inside its hard shell works most of the time, but there is one predator that can slip past the oyster’s defenses. The sea star (or starfish) also seems like a motionless sea creature, but in the world of the coastal creatures it hunts like a wolf.

A sea star has hundreds of tiny feet that can taste everything they walk over. If they happen to walk over an oyster instead of a rock, they attack! The feet act like little suction cups, grabbing on to both sides of the oyster’s shell and prying it open.

Even if the suction-cup feet can’t completely open the oyster’s shell, the sea star can turn its stomach inside out, and push it through the crack in the oyster’s shell straight into its cushy home. After that, it’s all over. The sea star digests its prey inside the shell, and after it tucks its stomach back in, all that is left is an empty shell. 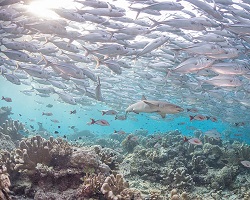 Sardines aren't the only fish that attract groups of hunters. These jack fish attract large predators like sharks that are looking for a meal. Click to enlarge.

These aren't the only hunters of the coastal waters. Coastal fish have many predators of which they need to be wary. When the seasons change and marine algae start to bloom, migratory fish like sardines, anchovy, or herring swim up the coast to eat the algae. Large swarms of tasty fish attract speedy predators including sharks, sailfish, sea lions, dolphins, and whales.

The predators work together to push the fish into a ball near the surface where they can’t escape. That’s when the sea birds strike. Many sea birds like gannets, cormorants, puffins, and shearwaters are adapted to dive into the water, while gulls and albatross pick up leftovers from the surface. Sooty shearwaters can dive over 60 m (200 ft) under water to hunt. Meanwhile, the sharks and other larger predators swim through the ball, trying to catch a meal. 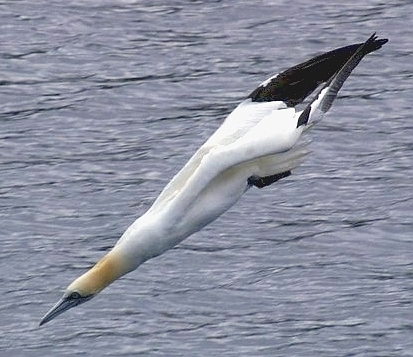 Gannet seabirds can dive as deep as 40 feet in search of fish to eat.