Polar: found at the Earth's poles, or the most northern and southern parts of the planet. Polar areas are usually associated with cold and snow.

Productive: getting a lot done or providing a favorable environment with food and shelter for many organisms to grow.

Tide: the rising and falling of the ocean that happens twice a day. It is due to the gravity of the sun and the moon.

Staying Near the Beach 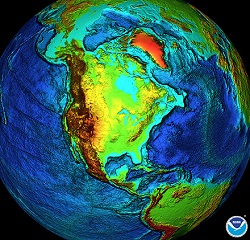 The continental shelf of North America. Click for more detail.

The region of the ocean that you can see from shore is the coastal, or nearshore, marine biome. It stretches from the high water line on shore out to the continental shelf, where Earth’s crust suddenly drops off into the depths of the ocean.

The continental shelf is just that – a shelf – that raises the creatures living on it up into shallower water. This biome is usually 200 m (600 ft) at its deepest point. Here in these shallow seas, much of the sun’s light reaches the ocean floor. These shallow, sunlit seas are a great place for organisms to grow.

Because this biome is found at the edges of the land, the coastal biome exists on every continent and in every climate. This combination of sunlight, water, and various climates results in a wide range of habitats along the coast. Some of these environments are coral reefs, kelp forests, river estuaries, sea grass meadows, and salt marshes. Even mangrove trees rise up out of the salty waters of the coast.

Coastal seas are shallow and protected, making them wonderful places for organisms to reproduce and raise their young. Many mother whales migrate to coastal areas to raise their calves in bays and coves. Tiny fish and crustacean babies grow big and strong in river estuaries. 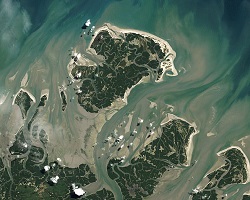 Some coastal areas have barrier islands. Click for more detail.

These estuaries (also called deltas) act as nurseries, providing plenty of food and protection from predators like sharks, whales and larger fish, which cannot squeeze into the shallow waterways. Many estuaries and coastal areas have sea grass, kelp, or mangroves that provide hiding places for young animals.

Healthy coastal areas also provide protection to humans and habitats on land. Coastal islands provide protection to the mainland by acting as a barrier, standing in the way of large waves and storms blowing in from the open ocean. Without these barrier islands, cities by the ocean would be flooded when large storms pass through. Coastal reefs also reduce the size of waves in some oceans. 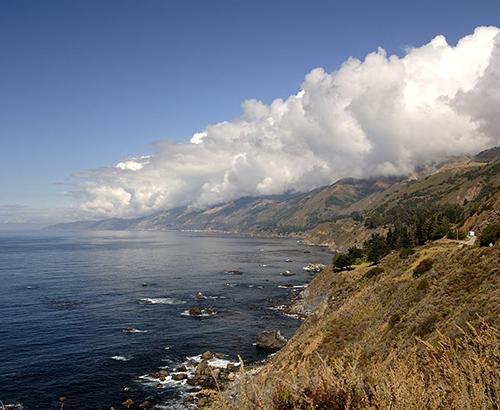 The ocean near Big Sur, California, is a famous example of the coastal biome. Coasts are found along the edges of all the continents.