Seasons of the Sea 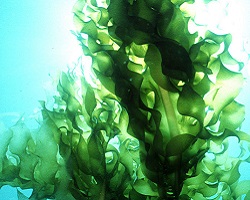 Because salt water is usually toxic for plants, we don’t find as many plant species in the coastal biome as we might expect. But there are some exceptions, like mangrove trees that live above water and sip the salty sea, and sea grasses that live their entire lives under the surf.

Instead, the marine biomes are home to many species of marine algae, which sometimes look like plants but are specifically adapted to life in the ocean. The larger algae, sometimes called kelp, look like land plants because they have a stalk, big leaves, and can grow to be over a hundred feet long.

Kelp are bound to rocks at the bottom of coastal seas and grow up to the surface to reach the sunlight, like an underwater forest. The smaller algae, or phytoplankton, can make food from sunlight like land plants, but they are tiny individual cells that float in the water near the surface.

The Ocean in Bloom 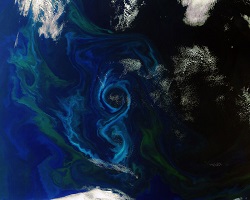 These beautiful rippling colors are not the brush strokes of an artist, they're millions of algae. Click for more detail.

Algae and plankton in the ocean need nutrients and sunlight, just like the trees and plants that live on land. The similarities between these marine and land organisms don’t end there, though.

These algae and plankton also respond to the seasons similar to flowers that bloom in the spring.

When conditions are right, the sunlight, nutrients, and cool water combine to help algae grow quickly. They grow so fast that they can paint the ocean waves with shades of green, blue, teal, and even red. Marine biologists call these events algal blooms.

Changes in weather during spring and summer are good for both land plants and ocean algae. This changing weather can stir up the ocean waters or bring rain, moving more nutrients into the sea. These increased nutrients and long summer days form algal blooms. 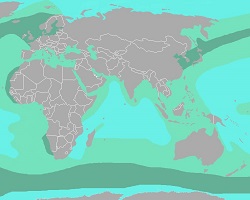 This map shows plankton levels in the oceans. Click for more detail.

With the sun’s help, marine algae actually produce more of the oxygen we breathe than all of the plants growing on land.

However, there is a downside to all this oxygen-producing algae. Sometimes the algae grow so fast and in such large numbers that they die before animals can eat them. Bacteria in the silt at the coastal floor eat the dead algae, using up oxygen in the process. This can cause areas of water that have very little oxygen, making it impossible for fish and other organisms to live there. These areas are called "dead zones."

As the sun slowly moves higher in the sky during summer, its light unlocks the polar coasts from the icy grip of winter. Here, the coast has been covered with thick layers of sea ice stretching out from land. 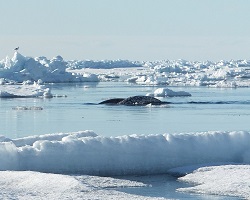 Many whales live in the Arctic or travel there in summer for the plentiful food. Click to enlarge.

Once summer comes to places like Greenland or Antarctica, the sea ice melts and releases many nutrients and organisms from their frozen embrace.

The melting ice also lets the sun reach down into the cold waters, letting algae produce some of the largest blooms on the planet.

Many marine animals migrate to the poles in summer to eat at this ice burg buffet. Whales come to slurp up the plankton soup and seabirds scoop up fish for their chicks. These animals feed around the clock to eat their fill before winter comes and the coastal waters freeze solid once more. 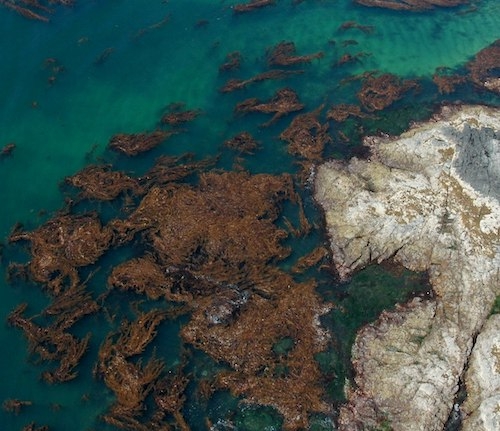 The coastal waters have some plants, but are mainly dominated by algae, like the brown algae shown here near tide pools.