Browse: when animals like deer eat leaves or other plant parts.

Cache: a place where something is stored or hidden; the act of storing or hiding something.

Cavity: a hole, often in a tree, formed either by rot or by animals.

Consume: to eat something.

Excavate: to dig a hole or uncover the dirt from something.

Animals of the Temperate Forest 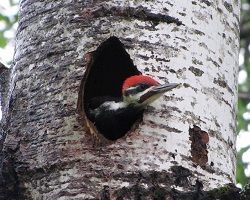 Woodpeckers serve an important role in the forest. Click for more detail.

The first sound you’ll hear in the temperate forest are the birds. You may not see them, but if you listen closely you can hear many different bird calls. In fact, experienced biologists can identify many birds just by the calls they hear. The Pileated Woodpecker, a rare temperate forest woodpecker, has a distinctive call that you may learn to recognize.

When winter comes, the forest turns from noisy to nearly silent. Many temperate forest birds are migratory, meaning that while they spend summers in temperate forests, they fly south every winter to find food. 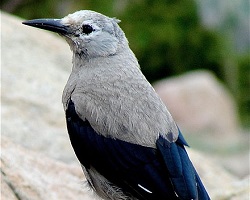 Not all birds migrate, some stay the winter, like many owls, but are less active, to conserve energy. Some go into what is called ‘torpor,’ which is an inactive state in which they use less energy. This helps them survive the winter with little food.
Other animals also hibernate during the winter. Bears are the largest predators in the temperate forest.
There are two species in North American temperate forests, black bears and brown or grizzly bears. They are omnivorous, which means they eat anything they can find--fruits and nuts, plants, fish, deer, and even insects. 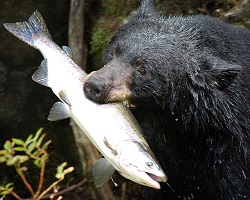 What makes up a bear's diet depends heavily on where it lives. Click for more detail.

Bears spend summers rearing young and eating as much as possible to store fat for winter, when they won't eat for up to 7 months.

However, not all animals hibernate. Deer are active all winter, and browse on bark and buds, as well as grass they can dig up from under the snow, and leaves from any plants that keep their leaves through the winter.

Fungi are an interesting group of organisms which are neither plants nor animals, but play important roles in the forest. Fungi participate in decomposition of organic matter in the soil.

Some mushrooms can be quite spectacular, like the Giant Puffball mushroom, which is perfectly white, and can be the size and shape of a soccer ball. 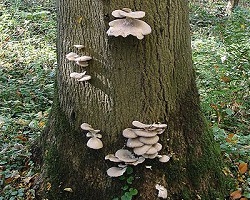 Oyster mushrooms are one example of a fungus, which is neither a plant nor an animal. Click for more detail.

Oyster mushrooms are a tasty example, but not all mushrooms are edible and many are toxic or deadly to eat. Never try eating wild mushrooms unless you know what you are doing.

Last but not least are the insects. There are many, many species of insects in the forest, though you may not see them. Some, like stick bugs, use camouflage to avoid being seen and eaten. There are many herbivorous insects that eat vegetation.

Some of these can become forest pests when their populations get very large, like the gypsy moth or the Spruce Budworm. The Western Spruce Budworm, which eats the young foliage on spruce trees, can sometimes kill extensive areas of trees under the right conditions. Other insects are pollinators, like many species of bees, which help to pollinate the plants in the forest. There are also insects which eat other insects, such as some wasps.
Images via Wikimedia Commons. Whitetail deer by ForestWander. 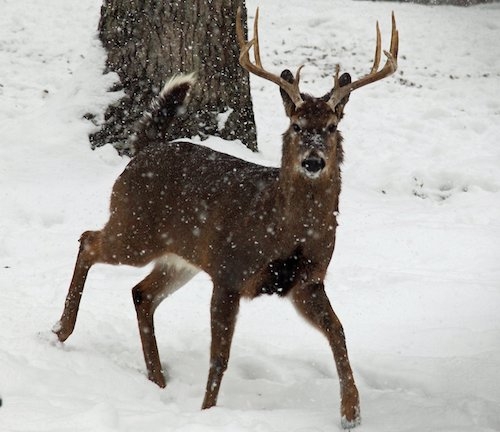