Plants of the Temperate Forest 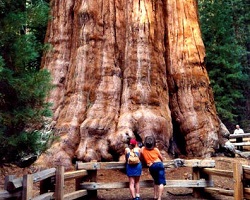 This tree in California, called the General Sherman tree, is the largest known singular tree in the world (by volume). Click to enlarge.

Trees are the most important plants in temperate forests. Most of the other organisms in the forest depend on the tree's ability to turn the sun’s energy into sugars using photosynthesis.

There are big trees and small trees. Some tree species like serviceberry, hop hornbeam, Dogwood, or Sassafras, never really get big enough to reach the canopy, and have relatively short lifespans.

Other trees like Oaks, Maples, Ponderosa Pines or Douglas-Fir, can live hundreds of years. Some Temperate Forest conifers like Redwoods and Giant Sequoias in California can live for thousands of years, and are some of the largest living things on the planet.

Big trees need a lot of water, which they absorb through their large root systems. They also need nutrients like nitrogen and phosphorus to make the enzymes and pigments (like chlorophyll) that they use in photosynthesis. 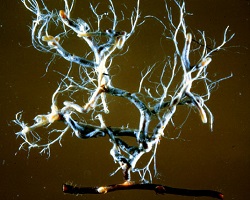 This root ball shows the roots in dark blue and the mycorrhizae in white. Image by B. Zak.

Though you can't see it, these trees take advantage of another organism to get nutrients from the soil. Almost all tree species use what are called mycorrhizae (meaning ‘fungus-roots’) to obtain some of their nutrients. These are roots which fungi have grown around or into.

Here’s how it works: the trees move some of their extra sugar, made from photosynthesis, into the mycorrhizae, giving the fungus access. In exchange, the fungus moves nitrogen and other nutrients into the trees roots, which the tree can then use to grow new leaves, for example. It’s a trade.
The tree has lots of sugar, but has a hard time getting nitrogen. On the other hand, the fungus is pretty good at getting nitrogen from the soil, but high-energy sugar is hard to come by. These two types of organisms have evolved to cooperate in a way that works out better for both of them, a relationship we call a mutualism. 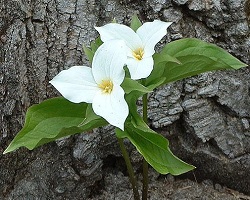 This small flowering white trillium can live for up to 70 years. Image by Dejo.

There are lots of other plants besides trees in temperate forests. Understory shrubs like Gooseberry (watch out for spines!) and Blueberry are some tasty examples.

There are also plants called forbs: small, non-woody, flowering plants, like lilies as well as orchids. One example is the beautiful White Trillium, a plant which produces large white flowers after about seven to ten years, and can live for 70 years.
There are also grasses and sedges, which can grow in open gaps in the forest. These plants provide food for deer and insects.
Some shrubs like rhododendron bushes keep their leaves through the winter. This is because they can get more sunlight during the winter when the canopy of deciduous tree leaves is gone. Since there are few shrubs that do this, there are very few leaves available for deer in the winter. Rhododendron makes toxic chemicals in its leaves to make them distasteful to deer to protect it from being eaten. 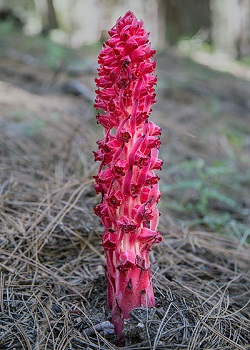 There are also some stranger plants in the temperate forest. While you may picture plants as things with nice green leaves, there are some species of plants which are actually parasitic. That is, they steal nutrients or energy from other organisms.

Mistletoe is actually one of these plants. It grows high on the branches of other trees, where it steals water and nutrients from inside the tree’s branches. This way it doesn’t have to have roots in the ground.

The ghost plant is a small, pale white flowering plant. Unlike Mistletoe or other plants, it can’t photosynthesize at all. It steals sugars from mycorrhizae, the underground networks of fungus and tree roots. While this may seem strange, there are actually many examples of these parasitic plants in temperate forests, such as the bright pink snow plant and dark red pine-drops.
Images via Wikimedia Commons. Dogwood image by Muffet. 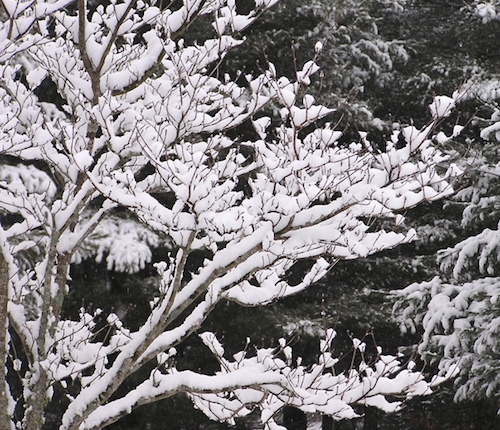 Some trees, like this dogwood, are called deciduous because they lose their leaves over the winter.