Old growth forest: A mature forest that has never been cut down by humans.

The air is still as you wander through the trees. Leaves slide under your feet and thick tree trunks surround you. Above your head everything is green, as leaves block the sky. You feel twigs crunch under your feet, and mushrooms peek out from under beds of leaves. Somewhere off in the trees you hear the pecking of a woodpecker. All sorts of birds call or fly off as you walk by. You stay quiet and see a deer pass by in the distance. Chances are, you’re in a temperate forest. 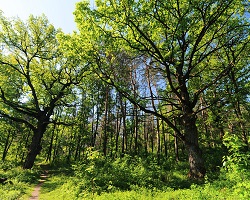 In a typical temperate forest, you have large trees, like these oaks, with younger saplings below. Image by Haidamac.

Even if you've spent time in temperate forests, these ecosystems hold many plants and animals that you've likely never seen. In parts of North America, Europe, and Asia, temperate forests used to cover huge areas of land. In several places they still cover large areas, though we've cut down most of the old growth forests.

Mild climates are mainly found around the mid-latitudes. South American and Australian temperate forests have many plants and animals that are similar, but unrelated, to those in the northern hemisphere’s temperate forests. Temperate forests receive about 30 to 60 inches of precipitation a year. The temperatures are rarely below -20 F (-29 C) or above 90 F (32 C).

Temperate forests have four seasons: spring, summer, winter, and fall. Because they are in the mid latitudes of the Earth — not too far south or north — they have a mild climate. 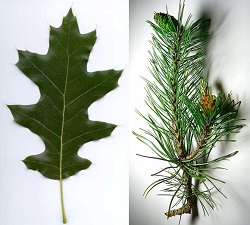 Deciduous trees, like the one the red oak leaf (left) came from, lose their leaves each winter. Coniferous trees keep their needles (right) all winter. Images by Ed Uebel and Mats Halldin. 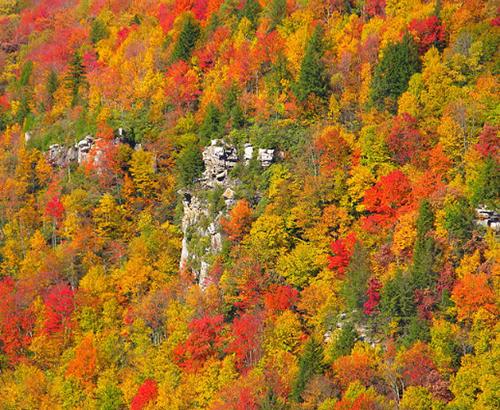 In deciduous temperate forests, many tree leaves change color during autumn before the trees lose their leaves in winter.