Cocoon: a soft case larva build to protect them as they grow.

Retinue: a group of assistants.

Colony Life of a Honey Bee

Life in the colony is entirely dependent upon the time of year. Honey bee colonies can get all of their resources from flowers. As a result, the life cycle of the colony follows the life cycle of flowering plants in the environment. Every spring honey bees start to build up their work force in preparation for the bloom of spring flowers. In the summer, honey bees ramp up resource collection and are at their largest and most active. In the fall, bees start to slow down collection as the temperatures start to get cooler and flowers start to become less abundant. Honey bees survive the winter, without flowers, by eating the honey they made during the spring, summer and fall. A large honey bee colony is an impressive sight. European honey bees, Apis mellifera, common to Europe and North America, can have colonies containing over 60,000 individuals. 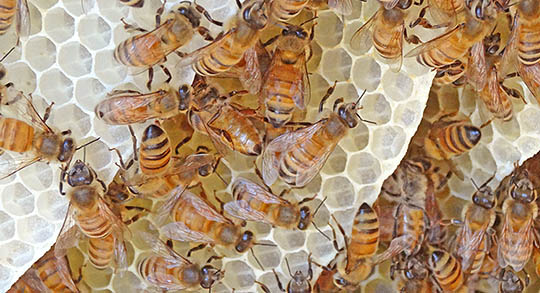 Are All Bees Female?

Not all bees are female. There are three types of honey bees within a hive: the queen, the workers, and the drones. A queen bee is the only female bee in the hive that gets to reproduce. Worker bees are all female, and are all offspring of the queen. But there are males in the hive called drones. Drones fly off to reproduce with other young queens who will start a new colony. 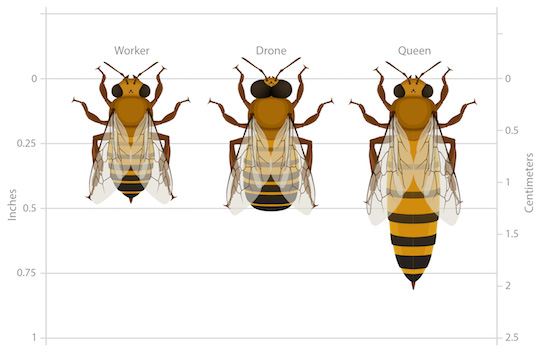 There are three types of honey bee within every hive: workers, drones, and a queen. The workers and the queen are female. Queens are reproductive and are larger than the workers. The drones are male, have much larger compound eyes, and do not have stingers.

Is It Good to be a Honey Bee Queen? 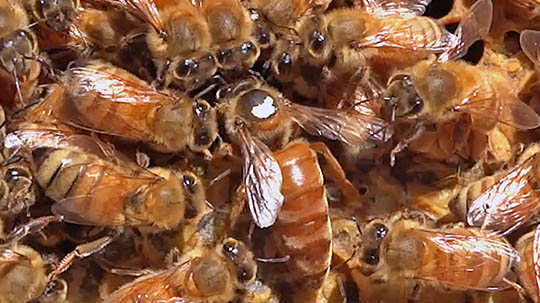 Honey bee colonies only have a single queen, and every bee in the colony is her daughter or son. Queens are easily recognized by their large abdomens and the retinue of workers bees that follow her around. If a second queen appears in the colony the workers will either force the invading queen out of the hive or the two queens will fight until only one is left standing.

A queen’s primary duty is to lay eggs. In order to maintain a large colony a honey bee queen lays on average 1500 eggs per day.

Honey bees start out as eggs, which then hatch into larvae and later turn into pupae—similar to caterpillar cocoons. The pupae then develop into the fuzzy adult honey bees you know so well. Developing from a larva to an adult worker honey bee usually takes about 21 days. 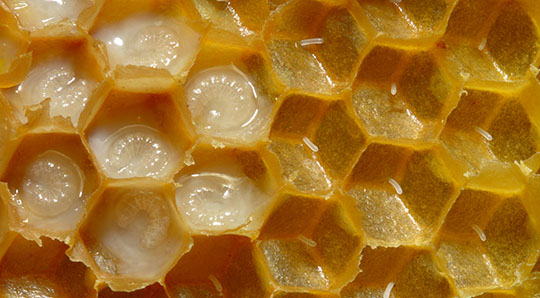 What Do Female Bees Do?

All honey bee workers are female. These workers change the tasks they do as they age—kind of how we change what we do as we get older: first we stay at home, then we go to school and then work. Young honey bee workers first do tasks inside the nest like take care of the queen and young larvae. Young bees also produce wax from glands on their abdomens and build all of the structures you see in the nest. How long each bee works at a certain job will change depending upon the needs of the colony. Usually after a few weeks inside the nest, workers will transition to outside tasks and take their first flight. The last task a honey bee worker performs is foraging. Forager bees leave the nest and collect nectar, pollen and water.

Adult honey bee foragers will usually live another 30 days after they begin foraging, about 51 days in total. This is because foraging is one of the most dangerous tasks in the colony. Outside the nest foragers are exposed to all the dangers of the outside world. They could be attacked by predators, lose their way back home, get caught in a wind storm, fall victim to diseases or pesticides in the environment, or any number of other dangers. In the winter when the worker bees huddle inside the nest for warmth, they can live for over 6 months.

The Life of a Male Bee (Drone) 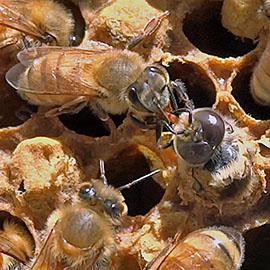 Female honey bee worker feeds an emerging male (drone). Notice the eyes of the drones are much larger than the female workers.Image by Charles Kazilek.

Male bees are called drones and do not have stingers, unlike most of the female bees you see.

Male bees are only around for a few months out of the year. They can look a bit strange with their large eyes, which surround almost their entire head. Their eyes are big in order to spot queens while flying. The male’s only job is to spread the genes of their colony. They leave the colony every day in search of potential new queens looking to mate.

What Is a Honey Bee Swarm?

Have you ever seen a honey bee swarm? When a honey bee colony gets too big or runs out of space the colony will swarm. The workers build special wax cells to raise a new queen. This new queen will then inherit her mom’s old house, and take over the duties of laying eggs. The original, older queen will take half of the workers and leave the nest. 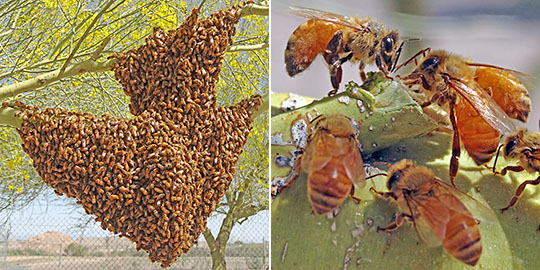 A honey bee swarm is just the old queen and some of her workers looking for a new home. The bees together with the queen pick a location, usually on a branch or side of a building and all hold onto each other. At the same time, scouts in the swarm are sent out to look for a new place to build a nest. If you see a bee swarm, avoid disturbing it but do not be afraid. It will not be there for very long. Once the scouts come back the bees together will decide which is the best location for their new home, and then all fly to the new home together.

Life Outside the Bee Colony

Most of the bees leaving the nest are collecting resources to bring back to the colony. Bees will fly upwards of 2 kilometers (1.3 miles) to collect nectar and pollen from flowers. The bees use nectar to make honey which is the primary energy source for the adult bees and for growing bee larvae. The bees collect pollen which is fed to bee larvae as a source of protein to help build big strong young bees. In return for the pollen and nectar, flowering plants get pollinated—allowing them to produce fruits and seeds.

Bees also collect water for drinking and cooling the nest. Bees were the first animals to invent air conditioning. They use evaporative cooling and their wings to pump air into and out of the nest to maintain their ideal temperature during hot summers. 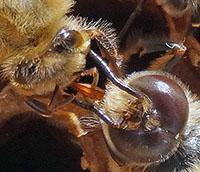 Feed me. An emerging drone bee getting a first meal from a worker bee.