Lift: the force acting in an upward direction that helps animals and objects to fly....more

Pulsation: a beating, throbbing, or vibration that is often repetitive.

What’s All the Buzz—How Do Bees Fly?

Have you ever wondered why you hear bees buzzing? Buzzing is the sound of a bee’s beating wings. Bees have two wings on each side of their body, which are held together with comb-like teeth called hamuli. These teeth allow the two wings to act as one large surface and help the bee create greater lift when flying.

In order to beat these wings, a bee has muscles that cause its thorax to squeeze in two directions: both up-and-down, and left-and-right. The bee alternates these rhythmic thorax pulsations, kind of like how we breathe, but instead of pulling in air, these pulsations cause the bee’s wings to beat back and forth. This also allows bees to beat their wings very quickly and fly.Honey bees can beat their wings over 230 times per second.

The Science of Bee Flight

This animation shows how a bee moves its wings during flight. See the image below for a step-by-step view of the wing path.

Scientists used to think that a bee’s wings were rigid, making bees kind of like little planes that moved hard wings up and down. But bee wings are fairly small for their body size, so even at 230 beats per second, rigid wings wouldn’t be able to let bees fly. For many years, scientists couldn’t understand how it was possible that bees could fly. But then, using high-quality video that could show the bee wing beats in slow motion, they finally figured it out.

Understanding bee wings was key to figuring out how bees could fly. Their wings are not rigid, but twist and rotate during flight. Bee wings make short, quick sweeping motions front and back, front and back. This motion creates enough lift to make it possible for bees to fly.

The path of a bee's wings during flight. Click for more detail.

Some other insects have a longer motion from front to back and a slower wing beat. The slower beat makes other insects more efficient, meaning they can get more lift with less work.

So why might bees use an inefficient way of flying? Scientists think that the style of flying bees use lets them carry heavy loads when needed. That ability comes in handy a lot for honey bees, who carry nectar and pollen from flowers back to the nest. 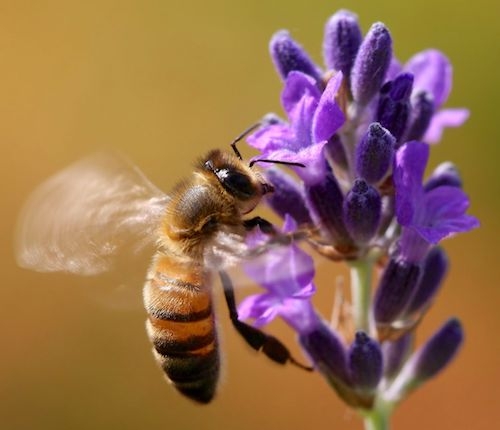 Bees have small wings for their body size, so how is it that they can fly?