Honey and the Hive 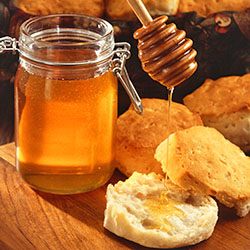 Honey is a popular food for humans, but do you know how hard bees work for that teaspoon you just put on your biscuit?

A single honey bee forager will only collect up to 100 mgs of nectar—about the size of two drops of water—per trip. What do bees do with all that nectar? They make honey. Worker bees inside the hive dehydrate, or remove the water, from nectar and add gland secretions to break down some of the sugars and help preserve the honey for long-term storage.

Honey bees make large quantities of honey. It is not easy work. By the end of summer a large colony will have stored over 100 lbs, or 45 kgs, of honey to ensure the colony has enough food for the winter. You can imagine why it is so busy at a bee hive—their winter survival depends on it.

Not all species of bee have help from thousands of family members. Some bees, like digger bees, have to do all of the work of collecting food, building a nest, and rearing offspring all by themselves. Other species of bees live in small groups and recruit the help of their daughters during parts of the year. For example bumblebee colonies start with a single bee each year and then build up to a few hundred by the summer. Keep an eye out the next time you stop by some flowers and see how many species of bee you can find. 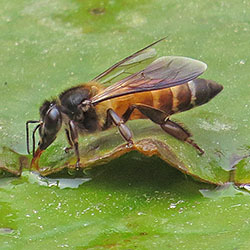 As you might imagine having all that honey and resources will make you a target. Honey bees have to be ready to defend their stash of honey from any honey-loving bears, badgers, or other large animals that might want to satisfy their sweet tooth.

How do bees do this? They usually do not bite. Instead they sting. Honey bee workers will sting to protect their sisters and colony from danger. Honey bee worker stingers are barbed. These barbs allows the stinger to remain in the victim and continue to pump venom at the site of the sting. However this barb also means the stinging bee will likely damage its body and internal organs and later die.

All female bees have stingers. The worker bee stingers (shown on the left) are barbed, so they will detach from a worker bee and get stuck in an attacker. This way the stinger with its venom sac can keep releasing venom. A queen bee has a smooth stinger. She can defend herself by stinging an attacker multiple times if needed.

Some bees, such as the giant honeybees of Asia, have many defenses, including large stinging swarms and the ability to heat up their abdomens to a temperature that will kill smaller predators, like a wasp. 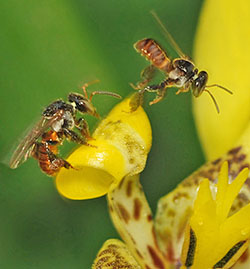 The thing Africanized bees are most known for is their sting. But the sting is no different than a European honey bee. Africanized bees are only a bit more sensitive to the signals bees use to trigger a defense or sting response. This means they are quicker and more likely to sting, and that is what makes them more dangerous to be around. However like the European honey bee they are only defensive at their nest.

As long as you stay away from the nest and do not bother the bee, you are fine to observe Africanized honey bees collecting pollen and nectar just like any other bee. 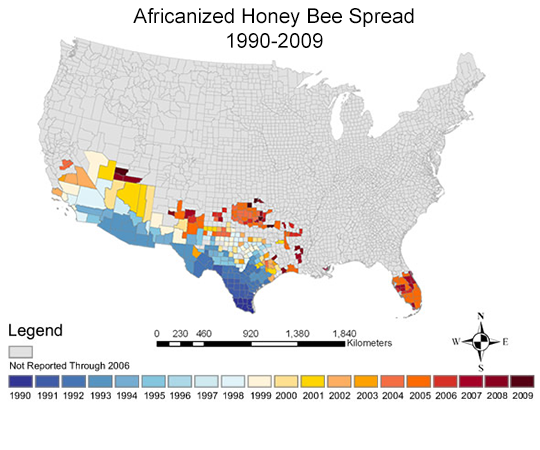 Migration of Africanized honey bees in the United States from 1990 to 2009. Data from the National Atlas, USGS, NASA. 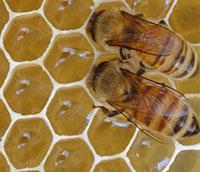 How much work do bees have to do to get that sweet honey we all love? Image by CJ Kazilek.