Dissolve: to become part of a liquid.

The Start of Sea Ice 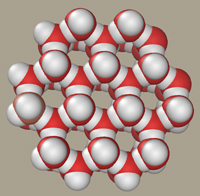 The molecular structure of water. Click on the image for more information.

Living in areas that freeze can make for dangerous mornings. You hold your arms out for balance as you walk out the door, taking each step carefully so you don't slip on hidden ice. One way that people deal with icy walk ways is by pouring salt on the ice to make it melt. Salt isn't warm, so how exactly is the salt affecting the ice?

Salt does something special to the water in which it dissolves. It reduces the temperature at which the water freezes. 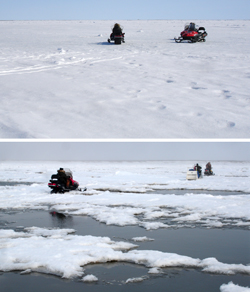 Early spring (top) and late spring (bottom) in the Arctic.

In the polar regions such as the Arctic, sea water does freeze in the winter, and then melts again in the late spring and summer. This is because the temperatures drops so much that even the loads of salt in the sea can’t prevent the water from freezing.

Even in the summer there is still ice in the polar regions because the temperatures remain very cold. The ice in the central regions of the Arctic around the North Pole is made up of several years' worth of ice growth (we call that multi-year ice).

Bring Out Your Brine 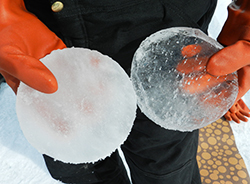 Fresh and salt water cores compared. Can you guess which is which? Click on the image for more information.

When sea ice forms, freshwater ice is formed first, leaving behind droplets of salty liquid called brine. This brine can get trapped in pockets or channels in the ice. Microscopic organisms in the water get trapped in the brine.

In the spring when temperatures start to increase again, the exact opposite happens in these brine pockets. They begin to expand again because the ice around it melts and the pockets merge with other pockets and form long networks of channels in the ice. These channels are the living space (habitat) for the microscopic organisms that were trapped in the ice in the fall.

Whatever is in the water column during the fall might get trapped in the ice when the sea water forms. This includes any plankton (sea drifters), from bacteria to photosynthetic algae to worms and larvae.

Larger grazers such as the planktonic crustaceans (like copepods) will likely not be found inside the ice unless they swim into the brine channels in search of food. Mostly they will be under the ice in the water, picking algae from the bottom of the ice. 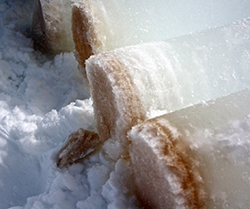 Color at the bottom ice core indicate algae living within the brine channels.

Photosynthetic algae are some of the plankton that become trapped in the ice during the fall. However, to make it through the winter with no light they enter a dormant or resting stage throughout the winter. This allows them to live but with low energy requirements (much like the polar bears hibernating above the ice). As soon as light becomes available for these organisms they “wake up” and start to grow again.

Life Under the Ice

The light from above must not only penetrate the clouds but then must pass through the snow and the ice to reach the organisms. This means the algae living in the ice have to deal with really dim light. But still they grow best in the lowest ice zone, where the ice meets the nutrient-rich open water. While this is the zone of the dimmest light, this is where they also get most of the nutrients needed for growth.

To see what it's like for the plankton under the ice, watch the video below. 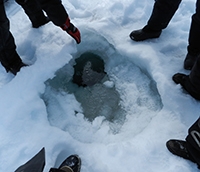 You might not know it looking at the surface, but arctic ice is actually home to a huge community of plankton below.