Collecting Cores in the Cold 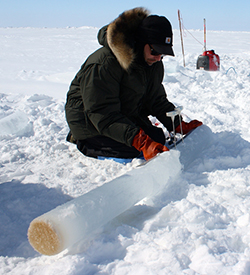 Imagine you want to pull a long cylinder-shaped piece of soil (called a core) out of the ground in your backyard. You'd need a tool to cut the ground, another to help pull it out, another to store it afterward, along with probably a dozen other random tools you didn't think you'd need.

In your backyard, you can easily go into the house and probably find something that will work to help with the job. But what if you were in the middle of an icy field, with no house or extra supplies to turn to?

When getting ready to do any task it is always important to make sure that you are well prepared and ready for whatever incidents might come up. But preparation is even more important when working in the Arctic because there isn't much available if something breaks or you are missing a tool. So before scientists go out to collect ice cores, they must prepare everything for the work out in the field.

In the Arctic, this preparation usually happens at a field station. There, the scientists who are interested in collecting ice cores prepare sleds that will carry all their tools and supplies (called gear). They make sure everything they need is ready and in working condition. They also cover their sleds with tarps to make sure nothing will fall out. Then the scientists and their sleds full of gear are transported by snowmobiles to the frozen Arctic Ocean. This is where they will collect the algae.

The team prepares their gear to go out on the ice. Sleds pulled by snowmobiles are used to carry equipment. 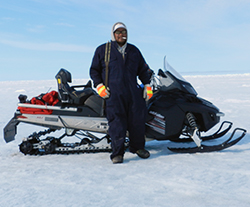 What kind of gear does it take to work in the Arctic? With freezing temperatures, you can bet that special clothing is at the top of the list. These clothes helps scientists stay warm and protected on the ice, even when the wind chill makes it feel much colder than it is.

In cold temperatures, your body also burns a lot more energy than normal. This means you need lots of food, especially warm foods, to help you make it through the long, cold days on the ice. You will also need all the gear that will let you collect ice samples. This includes generators, drills, and sampling equipment. 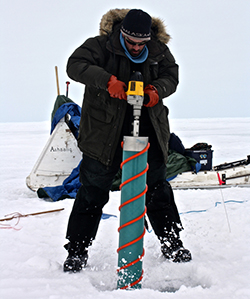 Finally, most sea ice travelers benefit from having a local native, called an Iñupiat, join in the trip as a guide. The local guide knows the area well and can help protect the group against certain dangers, like curious polar bears.

Getting to the Core

Once at the study site, scientists first measure how deep the snow is that covers the sea ice. The snow will have to be removed to expose the bare ice below.

Next, they attach a hollow drill bit (corer) to a drill and plug it in to a generator for power. They use a special corer that is designed specifically for collecting ice cores. Then they drill through the ice until they punch through the bottom and have reached the Arctic Ocean below. 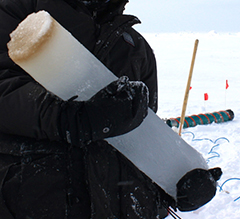 Here, a researcher holds a piece of an ice core.

The core is then removed from the corer by disassembling the drill from the corer and sliding the ice out. The scientists can then measure to see how thick the ice is, what the temperature of the ice is, and even the depth all the way to the sea floor. 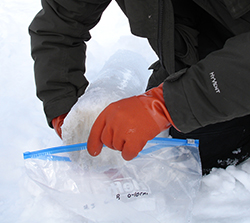 A section of ice is placed into a bag for further analysis in the lab.

Once the core is carefully placed on the ice, the scientists measure out a section of the core to sample.

Usually they use the 10 cm section that was closest to the water. They cut that section off, bag it, and put it on snow in a cooler to take it back to the lab.

They repeat this step multiple times to get enough samples and to check differences in the ice underneath different snow depths. Once back in the lab at the research station, they melt the ice carefully and process the melted samples. 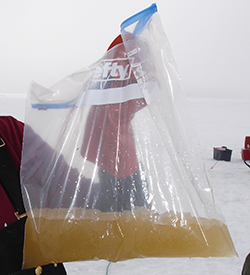 A team member holds up a bag of melted algae ice that will be brought to the lab for examination under the microscope.

The ice needs to be melted in order to collect the sea ice algae. In nature, this happens very slowly.

If the ice is warmed too fast in the lab, it could hurt the algae trapped inside, so the scientists must use some special tricks to melt the ice very slowly. They do this by slowly adding cold seawater to the cores.

Once the ice has melted they can look at the released sea ice algae under the microscope. They collect many samples from the melted ice from different locations and different points in time.

They take these back to their home laboratory for further analysis. This will allow them to compare the sea ice algae community from different sites, and to see when the community reaches its greatest abundance.

They can also learn about the timing of the algae release this way, learning at what point it sinks out of the ice into the Arctic Ocean underneath. This information will help them predict what might happen if the multi-year ice covering large areas of the central Arctic melts due to the warming climate. 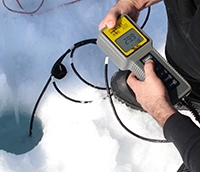 Scientists record details such as the temperature of the water below.