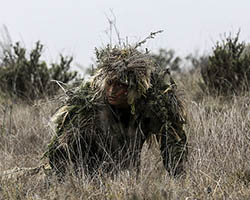 A male soldier sneaks through a field using the camouflage provided by his ghillie suit.

The soldier pulls on her ghillie suit and walks into the field. She lays down in the grass and disappears. Is she still there? Of course. But can you see her? No. When our brave soldiers in the military wear camouflaged clothing in battle, they use the same tricks that animals use to blend in.

Camouflage is an adaptation that helps an organism blend in with its surroundings. Blending in helps the animal avoid predators and increases its ability to survive. Camouflage in the animal kingdom works in various forms. Organisms may use their ability to blend in for different reasons, but ultimately it helps an animal to survive and reproduce.

Different Forms and Uses of Camouflage 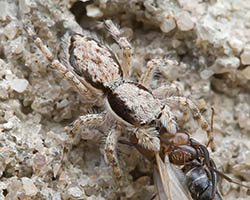 Camouflage isn't just about color. True, it may be a pattern on an animal’s coat or wings that lets it blend in. But it could also be the ability of an animal to mimic something else. Camouflage also includes coloration that is noticeable, but makes a body outline difficult to see.

Usually, animals that use camouflage mimic things a predator won't notice, such as plants or rocks.

Another form of camouflage is disruptive coloration. This occurs when an organism stands out against its surroundings, but has colors that break up its outline. Many animals have stripes or spots that help them to blend together when in groups.  This makes it difficult for a predator to detect just one of these animals. 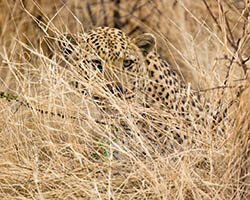 Camouflage helps this leopard get close to its prey. Image by Greg Willis.

When groups of disruptively colored animals are in a herd, it can make them more difficult to catch. A predator may lose sight of which animal it had chosen to attack and could get lost in the moving of the group.
Another benefit of camouflage is seen in the pupa (cocoon) of a moth or butterfly. This life stage can last weeks, months, or years, depending on the species. During this life stage, they must stay hidden, as this is the only defense they have against predators. When you are in danger of being prey, camouflage can help you avoid predators.
But some predators use camouflage too. Camouflage for a predator may help that animal to remain unnoticed while hunting. The ability to stay undetected by prey gives the hunter the advantage of a surprise attack. 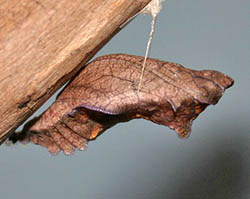 This pipevine swallowtail caterpillar is turning into a butterfly. Click for more detail.

Some animals use scent camouflage. This means they disguise their normal smell with a different one. They might mimic the smell of another organism to trick their predators or prey.
The California ground squirrel uses this form of trickery by covering their own smell with that of their main predator: the rattlesnake. The squirrel will chew up and spit out old rattlesnake skins and then apply the paste to their own bodies by licking their fur. Sound gross? You might do it if it helped you to survive! 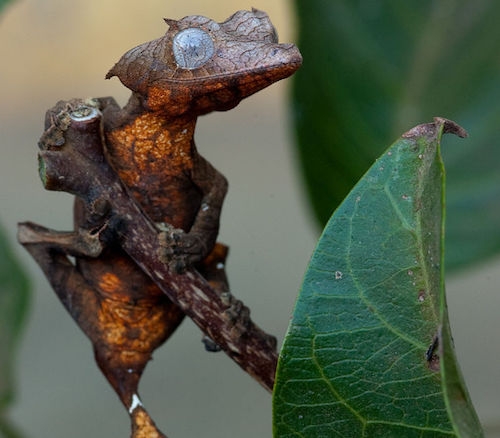 Leaf-tailed geckos not only have tails that resemble leaves, their skin also has a pattern that resembles dead leaves or tree bark.