Soot: a black powder produced by burning coal, wood, or some other substances.

You walk over the tan-colored sand of the empty desert. You are mid-stride through a set when a rattlesnake appears out of the sand in front of you, rattling its tail. Luckily it had warned you of its presence. This snake matched its environment almost perfectly, making it very hard to see. 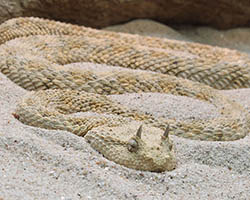 Camouflage is an appearance or behavior that helps something blend in with the surrounding environment. Click for more detail.

The ability for animals to blend in is what helps many avoid being eaten by predators. For others, it is what helps them catch unsuspecting prey.

Imagine if that same snake were moved to a green leafy rainforest. The colors that helped the snake blend into the desert will make it stand out against the green environment. It will no longer be camouflaged.

This just goes to show you that camouflage doesn’t work everywhere. What helps you hide in one place might make you stand out in others. So what happens when an animal's environment changes? Let’s take a look at one animal species that is famous for changing over time to stay camouflaged: the peppered moth.

A Pick of Pepper 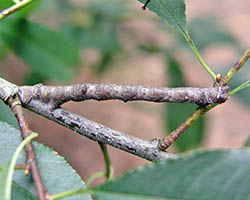 The caterpillar of the peppered moth can blend in on some trees, looking like a twig. Click for more detail.

Like many insects, the peppered moth can benefit from blending into its environment. This means its coloration should match with the trees on which it perches. So, what would happen if the trees began changing, and the peppered moths were no longer able to blend in?

It could adapt to these changes in a number of ways. The individuals could move (to try to find trees that match its color). Or the species could have altered behavior, or even change over time to adapt to the new surroundings.

From Light to Dark Moths

Moth collectors in England noted that most peppered moths collected in the early 1800’s were light gray peppered with bits of black. Many years later most of the moths collected were almost completely black. 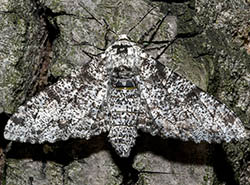 Most of the peppered moths collected in the early 1800s were the light form. Click for more detail.

What could have caused the more common light colored moth to become rare?

Once this mutation was present, the dark-colored moths would produce offspring with dark-colored wings. Light colored adults that didn't have the mutation produced light offspring. But genetics is only part of the story.

During the 1800’s, Europe and America experienced the Industrial Revolution. It was a time of change in manufacturing processes that led to the building of factories.This enabled humans to make many more things much faster. 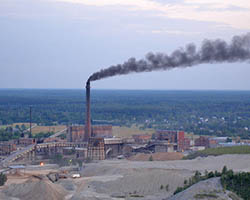 In the 1800s, manufacturing processes changed. Click for more detail.

We went from a largely rural society to a city or urban one. One of the new fuel sources that was heavily used during this time period was coal. Small amounts of coal can produce large amounts of heat. It nearly replaced wood in many homes in Europe during this time. It was used for heating homes and cooking and it became the main energy source in factories.

Coal burning released large amounts of smoke and smog into the surrounding environment.This left a layer of black soot on the once lighter-colored trees. The pollution also killed the light speckled colored lichens that grew on the tree trunks. The tree bark was now exposed and dark without the lichens. How did this affect the peppered moth?

The Pepper in Peppered Moth

Like many moths in forests, the peppered moth tends to rest (or "perch") on tree trunks during the day. They do most of their flying at night. So it would probably be a good thing if the moths look similar to the trees that they perch on, right? Then they can be camouflaged from birds that want to eat them. 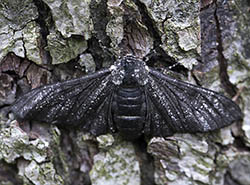 After the pollution from the Industrial Revolution started affecting trees, most of the collected peppered moths were of the dark form. Click for more detail.

Over time, the dark colored moths became the more common of the two color forms. Natural selection favored the dark individuals, so they were more successful after the trees changed.

Sound a little hard to believe? Well, more observations have come about since these conditions started to reverse, starting in the 1950s. Then, a Clean Air Act was introduced. Since that time, technology and cleaner burning fuels have started to decrease pollution in the areas where the peppered moth lives.  The lichen has started to grow again and the black soot no longer settles on the barks of the trees. As expected, the light peppered moth population has recently been more common in the population. This is because it is better camouflaged.

Dr. Kettlewell wanted to know if natural selection was driving the change in moths. Click to visit the game page and learn more.

Biologists are curious about why coloration can differ among individuals in a species. Many scientists want to look at both how and why a species may change over time.

Scientists like Dr. Henry Bernard Davis Kettlewell used the Scientific Method to test how and why peppered moth coloration changed.

Visit Picking Off the Peppered Moth to learn more.

Need the old version? Click for the Flash version of the Peppered Moth game. 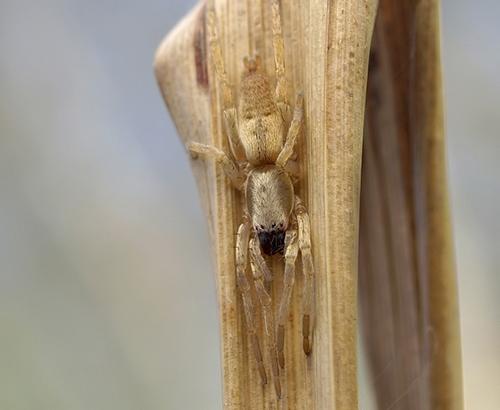 Animals use camouflage to avoid being eaten, but predators also use it to try to catch prey to eat. This spider blends in very well on this long brown leaf.