Abdomen: the part of the body in animals with a backbone (vertebrates) that contains the digestive organs such as the stomach and intestines. The last segment of the body of insects and other arthropods.

Resilin: a rubbery molecule that tymbals are made of, which give them great sound-making abililty

Tymbals: region of exoskeleton with ridges that cicadas vibrate with their muscles to produce sound

Cicadas are most well-known for their very loud, constant chorus of song during the summer season. Although they sort of sound like crickets, it is pretty clear that cicadas are bigger and better at bringing the noise. 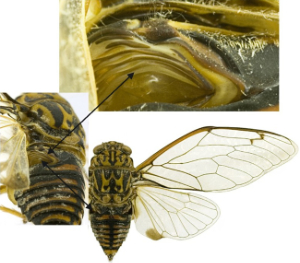 While crickets rub their wings together, male cicadas use a different, louder part of their bodies to make noise. Both sides of their thoraxes have thin, ridged areas of their exoskeletons called tymbals. Tymbals are made of a rubbery substance called resilin. The cicadas vibrate their tymbals very fast using muscles in their bodies. With every vibration, a sound wave is released, and cicadas can send out 300-400 sound waves per second! Females also make sounds to attract males, but they use their wings to make a clicking sound, rather than a high-pitched song like the males.

The cicadas you hear singing long into the night are male cicadas looking for females to mate with. Males are so loud because they have a couple other sound features that allow them to make very loud continuous noises. The abdomen of male cicadas are almost completely hollow. When sound waves from the tymbals enter this hollow area, they bounce around. This can change the sound, make the sound louder, or both.

Different size and shape cicada abdomens will change the sound in different ways. This explains why different cicada species make different noises. Cicadas, and all insects for that matter, also have hollow tubes running through their body called trachea. Trachea move oxygen and carbon dioxide around, sort of like our lungs. Trachea are also hollow, so they are also used by the cicada to make their songs louder. All in all, the cicada is one complicated insect instrument! 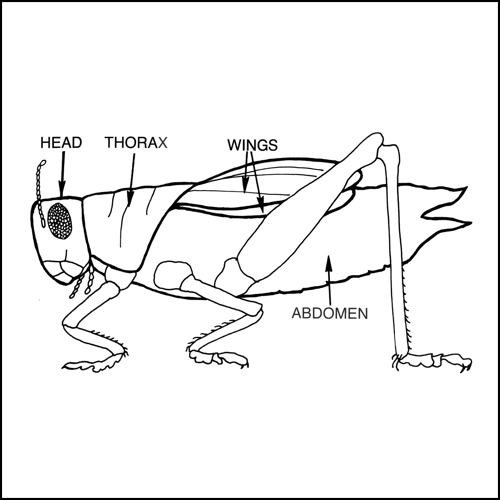 The basic body plan of an insect.