Life cycle: the sequence of all stages through which an organism passes - going from egg to adult.

Rostrum: a pointy part of an insect exoskeleton near their mouth.

What Is a Cicada?

Every year, new life pops out of the ground, ready to soak in the spring rain and summer sun. In the eastern United states, the weather is cold in the fall and winter. During these months, leaves turn brown and many animals find winter burrows. Many plants and animals in similar environments across the world go through this life cycle every year. 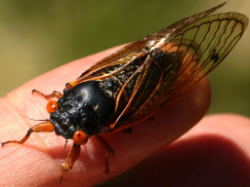 A male from the 17-year periodical cicada genus Magicicada. Image by Peterwchen

The eastern half of the United States is home to insect species that don’t play by these rules. These insects don’t have a year-long life cycle, but either thirteen-year or seventeen-year life cycles. These species belong to the genus called Magicicada. They have truly magical life cycles and some very unique abilities.

In the early summer months of 2021, billions of cicadas climbed out of underground burrows. They crawled up nearby trees, shed their final exoskeletons, and flew toward the upper branches. There, they sing their very, VERY loud mating calls.

Where Do Cicadas Live?

These cicadas belong to the genus Magicicada. Species within Magicicada are just a few of over 3000 species of cicada that live across the world. Most of these cicada species have life cycles between 2-5 years, which is much less than the species in the Magicicada genus. Cicada species live in North America, South America, Europe, Africa, and Asia...every continent except Antarctica. Most look pretty similar. Cicadas are usually about 1-2 inches long, and have a wide head with two big eyes on either side. They have a pointy part of their mouth called a rostrum, which they use to cut into plants to drink sap for food. They also have special body parts for making sound, and most species sound a little bit different from one another. Cicadas are very well known for how loud they can sing. The loudest cicada, Brevisana brevisis is also the loudest insect on record. 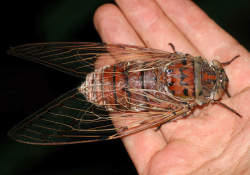 Megapomponia imperatoria is the largest cicada in the world, with a wingspan up to 8 inches! Image by Dr. Alexey Yakovlev

All cicadas have the same basic body shape, but they come in all sorts of sizes and colors. Different cicada species also like to live near different plants species. The biggest cicada, Megapomponia imperatoria, lives in Malaysia. Its body is almost 3 inches long, and its wings stretch out to be 8 inches long from tip to tip. The loudest cicada, Brevisana brevisis is also the loudest insect on record It is almost as loud as a chainsaw! Cicada species have been around for a long time. The oldest cicada fossils are from the Triassic period, which means they may have been buzzing around some very big dinosaurs.

Many cultures around the world and throughout history have studied and admired cicadas. Their quiet, underground start to life and their noisy, dramatic ending continues to fascinate many people. There are many mysteries still unsolved about how and why cicadas can have such long burrowing periods. The Magicicada is the most extreme example of this. Why do they stay underground for so long? Why did they settle on a 13 or 17 year schedule? How do they even keep track of all those years? 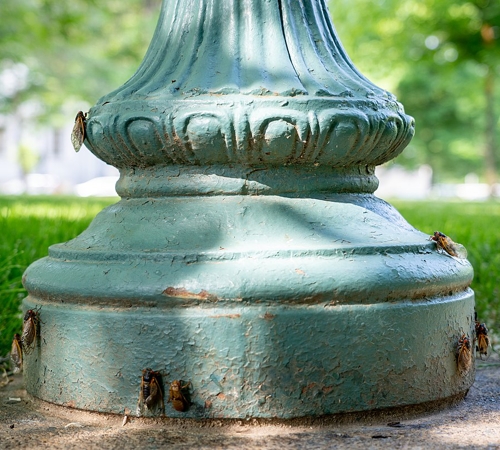 Brood X cicadas climbing a lampost near the U.S. Capitol.