Most insects we see do not have very long lives. Black ants can live a few years, worker bees usually live 1-4 months, and houseflies live less than one month. There are even some insects that only live for one day! On the other hand, some insects can live a very long time, such as a group of cicadas that live in the Eastern part of the United States. These cicadas belong to the genus Magicicada, or “Magic Cicadas”. They are named this because their life cycle seemed like magic to the scientists who named them. 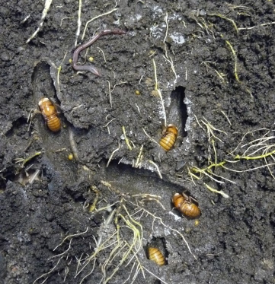 Cicada nymphs crawl out of the ground to begin their climb. Once they reach a good spot, they will shed one last time, and become an adult. Image by Christina Rowe.

While most cicada nymphs live underground for 2-5 years, Magicicada nymphs spend either 13 years or 17 years underground. Scientists aren’t sure why they spend this long underground, or how they are able to keep track of all that time, but they have some ideas. Before we get into those, we need to take a look at the different groups of cicadas that exist.

Within the genus Magicicada, there are a few different species of cicada. These species look very similar, but they emerge from the ground on different timelines. There are three species that spend 17 years underground as nymphs, and there are four species that spend 13 years underground as nymphs. Cicadas emerge from the ground in groups called broods. A brood is a group of cicadas that go through their life cycle together and emerge within a similar area. There are 15 different broods in different stages of their life cycle throughout the eastern part of the U.S. Some are still in their nymph stages underground, while some are climbing trees and calling out for mates. Broods can contain multiple cicada species… as long as they emerge at the same time in the same area, they are considered a brood.

Broods are named with roman numerals, but often have common names as well. For instance, the largest of all broods, Brood X (X is roman numeral for 10) is also called the Great Eastern Brood. The last time this brood emerged was 17 years ago. If you are younger than 17, you weren’t even alive yet! After Brood X emerged in 2021, the next in line to emerge is Brood XIII (13) in 2024. Brood XI (11) has gone extinct, and Brood XII (12) never existed in the first place. Brood XIII is called the Northern Illinois Brood because, well, the cicadas will emerge in and around northern Illinois. 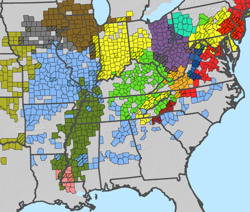 A map of different cicada broods across the eastern United States. Click for more detail.

Some scientists think that periodical cicadas spend so long underground so their predators can’t rely on them as a food source. Even though there are plenty of animals that eat them, none of their predators only eat them. Avoiding predators could also be why so many emerge all at once. By emerging in the millions, it ensures that a lot of cicadas will still be able to mate and lay eggs. If only a few emerged, its possible they would all be eaten before they could lay eggs.

How do the baby cicadas know when 13 or 17 years have passed? This also remains a mystery, but scientists think that the nymphs keep track using the xylem sap they drink from plant roots. The taste of xylem sap changes throughout a year, so the idea is that nymphs can tell when a year has passed by tasting the xylem sap. After 13 or 17 cycles of xylem flavor, a brood of nymphs begin to dig toward the surface, to emerge all at once. 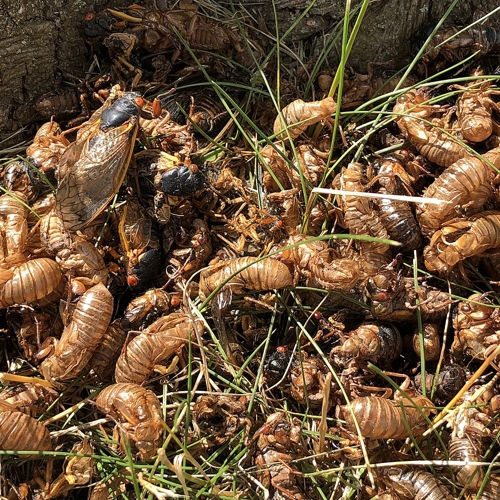 A pile of periodical cicada exoskeletons at the base of a tree.