Our bodies need energy for just about everything they do. We use energy to think and to breathe. We also use energy to move things within our bodies, whether we are moving large muscles or tiny nutrients. All organisms spend energy to build molecules. One of the ways this is done is by using energy created by concentration gradients. 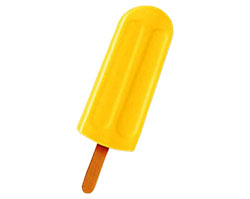 A Popsicle is a treat packed with sugar and flavoring. Click for more detail.

Why doesn't the melting Popsicle stay separate from the water? Because molecules tend to move from areas of high concentration to low concentration. There is no sugar in the water, so sugar moves away from the Popsicle and mixes into the water. Movement like this is called diffusion. Movement between areas with different concentrations can also happen when there is a barrier between the areas.

Inside of organisms, these barriers are often membranes. Membranes are sheets of material that act as boundaries. As an example, membranes surround cells. Sometimes within these cell membranes, special passageways exist that still allow molecules to move in and out of the cell. We call these channels or transporters. Many channels and transporters control what materials they allow to go in and out of the cell. Because of this, differences in concentration of materials can occur between the space inside or outside of the cell.

Moving On Down (the Gradient) 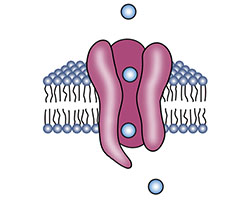 Movement of molecules down a concentration gradient can be used to move or change other molecules. Click for more detail.

Think of the ions as trying to even out the concentration of the areas. To understand this idea, imagine that ions are water and the cell membrane is a dam. If one side has a lot more water, lots of pressure is on the dam.

When the flood gates open, water will flow through (from the side with lots of water to the side with less water) until the water on both sides of the dam is level. As the water flows through the dam, it can be used to turn a turbine (like a water wheel) to generate electricity. 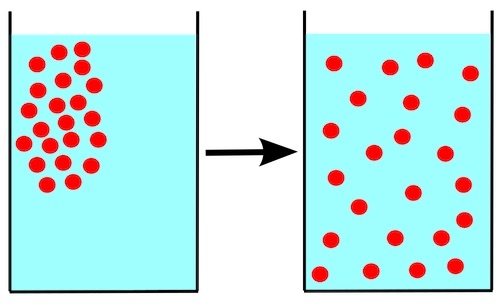 Molecules tend to spread out to have more uniform distribution, rather than staying concentrated in one area.