Fertilizer: a material added to soil to help plants grow.

Phosphorus: 15th element on the periodic table of elements. Phosphates are mined to obtain phosphorus for use in agriculture and industry.

Pollutant: something introduced into the environment that affects it in an unwanted way.

Yield: the amount of a product that is made.

Phosphate Fix: The Sweet Side of Greens

Putting dirt in your mouth isn't a very popular pastime. But when it comes down to it, everything you eat comes from dirt and from air. This is true whether you eat rice, tomatoes, eggs, cows, or candy bars. We could even argue that humans come from dirt. We eat plants and some of us also eat other animals, like chickens. Chickens eat plants and insects, and many insects eat plants as well. So everything comes back down to plants, which come from dirt and air. 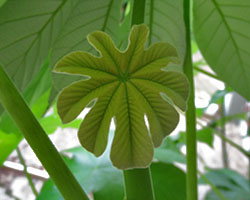 To grow, plants need sunlight, water, and carbon dioxide from the air. Plants also need nutrients like nitrogen and phosphorus, which most plants get from the soil. There are more than 7 billion people on the Earth and that number grows every day. It’s important to think about how we’re going to feed everybody. This means that, no matter what we eat, we need to figure out more efficient ways to grow crops.

You may think that we’ve already figured it out. After all, while not everyone in the world gets enough food, most of us do. Many of us even waste a lot of food. Yet, in a little over 100 years, the Earth’s human population exploded from 1.6 billion in 1900 to over 7 billion people. Such an increase in population wouldn't have been possible without lots of food. So how did humans manage to grow more food?

In the early 1900s two German chemists, Fitz Haber and Carl Bosch, were studying gases. They figured out how to use nitrogen from the air to make ammonia, a plant fertilizer. Using nitrogen as well as phosphorus fertilizers allowed us to grow enough food to feed billions of people. However, using lots of fertilizer had an unexpected effect. 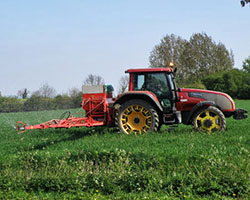 Over many generations, fertilization can cause plants to have small roots. Click for more detail.

With lots of nutrients available to plants, there was no advantage to larger roots. Plants with small roots, but big leaves or more seeds, reproduced more and passed on their genes. This led to more and more of our crops ending up with small root systems. We figured out a way to keep making plenty of nitrogen to use on these small rooted plants. But the situation is different for another nutrient, phosphorus.

You may not have heard of phosphorus before, yet it is a very important element. It stiffens our bones. It’s in our DNA. It’s in adenosine triphosphate (ATP), which is the molecule that provides the energy for nearly every single thing your cells do. Plants also need it to get energy from the sun.

Plants gather phosphorus from the soil in the form of phosphate. Phosphate is simply a phosphorus atom bonded to four oxygen atoms. We use tons of phosphate fertilizer on our crops to produce the yields we depend on. Yet unlike nitrogen, phosphate can’t come from the air. The renewal of phosphate depends on the movement of the Earth. Lands and continents have to shift and push up new rocks that hold phosphate. These changes take thousands or millions of years. 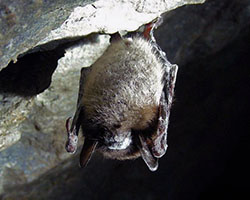 Phosphate used to be mined from bat guano (poop) but now phosphate is mined from phosphate rock. Click to enlarge.

The Future of Phosphate

Historically, phosphate was mined from bat guano, but bats can only poop so much. So now the majority of phosphate comes from phosphate rock. Yet, just like the bat guano, there’s only so much phosphate rock to go around. In fact, it is projected that at current rates, we will run out of phosphate in the next 50 to 100 years.

As if that’s not bad enough, most of the phosphate in fertilizer isn’t even used by plants. With their small root systems, they can only use a small amount at any given time. Much of the phosphate is washed or blown away. In this form, it actually acts as a pollutant. If it makes it to lakes or streams, it causes algae to grow so fast that they use up the oxygen in the stream or lake and kill off the fish. Phosphate that stays in the soil can sometimes bind to the soil so strongly that it makes it very difficult for plants to use it.

Between pollution and limited supply, we need to be more careful with phosphate. There are two main ways we can attack this problem. We can capture extra phosphate and recycle it, or we can help plants take up and use phosphate more effectively. 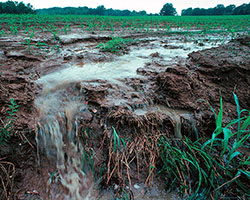 Lots of phosphorus is wasted because it is washed away with farmland runoff water. Click to enlarge.

The first way, we would have to catch the extra phosphorus from all the farms before it reaches the streams. Then we would have to separate it from the dirt and other material we picked up with it, and ship it back out to the farms. This process would allow us to continue to dump a bunch of fertilizer on crops again and again, but it would be very costly and time consuming.

The second way involves changing plants, so that they are better at getting and using phosphate. Then we could use less fertilizer in the first place and still get the same amount of food.

For the past couple of decades, researchers have been working on the second approach using genetics. They have modified the genes of plants so some plants are able to grow more roots that are longer. These plants can better absorb phosphate from the soil so that we don’t have to use as much fertilizer and there’s less waste. If we can expand their work to major crops, it could be the answer to our phosphorus problem. 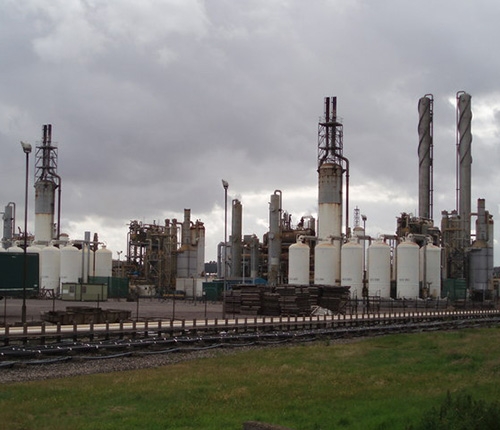 Our large population can only exist because we are able to use fertilizer plants to harvest nitrogen. We harvest this nitrogen from gases using the Haber-Bosch process.