Aggregation: the collecting of different parts to make a large grouping....more

Eccentric: actions or thoughts that go against what is considered "normal".

Insect: major group of animals with a pair of wings and three pairs of legs... more

Xeriscape: landscape designed to use less water for the support of life- similar to a desert... more

Alcock is buggy all right. He ripped the Bermuda grass out of his front yard 10 years ago, replacing it with a xeriscape designed to attract insects for his own home laboratory. Using information gained from his studies at home and elsewhere, Alcock recently published a book for layman insect lovers titled In a Desert Garden: Love and Death Among the Insects.

Using his own research and the research of others, he describes a variety of topics ranging from his nocturnal observations of earwigs to the mating habits of the praying mantis to making compost in the desert.

"I think the beautiful thing about insects is they're so driven," Alcock said. "Each one is kind of entertaining."

The same is true of Alcock. While most people do everything in their power to keep termites away, Alcock hunts for cow patties around the Mazatzal Mountains north of Phoenix and plops them in his yard to attract termites. During the summer, with his wife, Sue, in tow, Alcock sets up shop next to his brittlebush where generations of bees come to nest. He uses acrylic paint to mark them and then observes how many return to the same bush.

"I feel privileged to have acquired a sleeping bee aggregation in the front yard," Alcock writes in his book. "It is an odd phenomenon that cries out for investigation, and what closer laboratory for behavioral research than my own front yard?" Alcock, 55, is an accomplished biologist. In 1988, he was named a Regents Professor, an honor reserved for exceptional faculty scholars who have achieved national and international distinction.

When asked if she shares her husband's fascination with bugs, Sue Alcock replied, "On a scale of 1 to 10, I'm a 6, he's definitely a 10." Alcock has lived in his Tempe home for 25 years and remains popular with his neighbors. They frequently stop by to check out his front yard garden and see what new experiment he's working on.

"It's a conversation piece," explained Charles Combs, 75, who lives across the street. "He's usually out there taking care of his plants."

Alcock admits he pushed the envelope a tad when he secured three bags of rat dung from an ASU lab and added it to his compost heap in the back yard. One bag would have sufficed.

"I can remember people asking 'Where is that smell coming from?'"Alcock said with a smile. He didn't tell.

"Every time I see him out I'll go over and he'll give me the lowdown," said Lucille Stiner, 75, who lives across the street from Alcock. "Everybody should have a neighbor like him.” 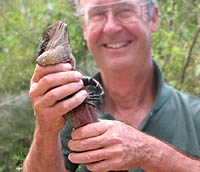