Thermal: having to do with heat and keeping warm.

Thermoregulation: keeping body temperature from being too hot or too cold.

Some lizards begin their morning by sitting in a sunny spot on a rock. These lizards aren’t being lazy – they are just getting ready for the day! Unlike you, lizards don’t make enough heat to stay warm, so they rely on their environment for warmth. Sun-bathing is just the fastest way for a lizard to warm up so that its muscles work properly. 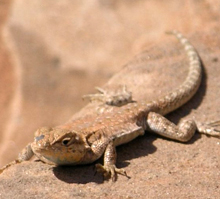 Temperature matters a lot to a lizard. If it’s too hot or too cold, a lizard can’t run quickly or digest its food well. With climate change affecting the temperatures on Earth, higher temperatures could end up having a big impact on how—or even if—some of these animals will survive. ASU Professor Mike Angilletta has made it his job to find out how temperatures affect animals.

Temperature is important to all organisms, including you. On a blazing summer day, you probably look for a shady spot under a tree. In the cold winter, you might look forward to a nice, hot shower. Just like you cool down or warm up to feel more comfortable, many animals have their own preferred temperature (a temperature at which they like to keep their bodies).

“The goal is to collect information on how temperature affects animals such as lizards, and see if these animals would still be able to find food and survive in a hotter world. Because the climate is generally becoming hotter, this question is really important.  This problem doesn’t just affect lizards – all animals are affected by temperature.” 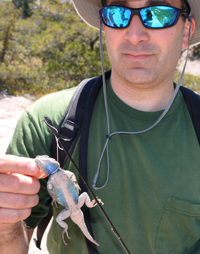 Animals aren’t the only ones affected by higher temperatures – plants and bacteria are, too. In fact, the vegetables that you eat, the bacteria that make you sick, and the pets that you play with are all affected by temperature. That is why this kind of research is so important.

By studying how temperature affects these organisms, biologists can come up with plans to keep these plants and animals around for centuries to come. For example, Angilletta really likes to eat salmon, and salmon are very sensitive to changes in temperature. “I want to be able to eat salmon for the rest of my life,” he explains.

Even though all animals are affected by temperature, it is easiest to study how temperature affects animals by studying those that rely on the environment for warmth – such as lizards.

These little animals are also interesting to watch because they differ from people in a lot of ways, including going days without eating and even longer without drinking water. When they do eat, they often swallow their food without even chewing it! But, lizards are similar to some people in at least one comical way – some males do push-ups to impress the females.

Angilletta feels lucky to have a job where he gets to have fun working with these amazing animals, all the while helping to make the world a better place for both lizards and people. 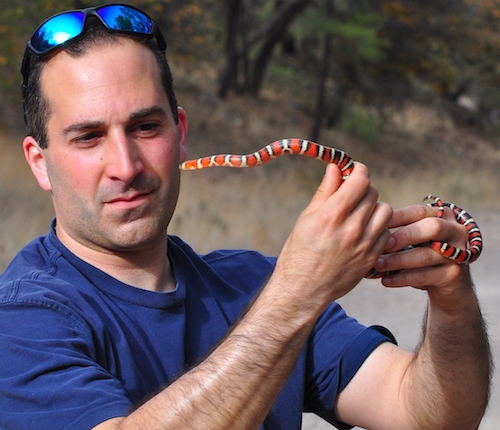 Mike Angilletta began his career in biology because of an interest in snakes. Here he holds a harmless kingsnake that looks very similar to a venomous coral snake. Check out how Angilletta maps the future of some reptile species.