Range: a specific area. In biology a range can be the area where a particular organism lives or migrates to and from.

Tolerate: to allow or endure something or someone that is unfavorable. In medical terms, it is a person's ability to take a drug or treatment without serious side effects or discomfort.

Vunerable: open to attack or damage.

Most of us wish we could predict the future. We want to know everything from who will win the big football game to whether or not our favorite superhero will defeat the super villain. Biologists want to know the future too. They want to know how the changing world will affect humans and other organisms in the future. And since biologists can’t just look into a crystal ball to find answers, they need more creative ways to make their best guess. 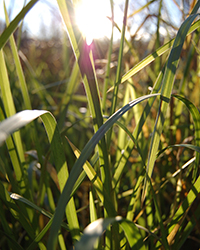 If you have a front yard, you might have bugs that live in the grass, but not on the concrete. Image by Permose.

One way to predict how an animal might be affected by the changing world is to look at where the animal lives now. For example, if you have a front yard, you might have bugs that live in the grass, but not on the concrete. If you were to replace your concrete with grass, you might guess that the bugs would then move into the new grass (and you’d probably be right). This guess is based on knowing that, currently, the bugs seem to prefer a habitat with grass over one with concrete.

This preference may exist because grass has a climate that bugs prefer. The climate found in the grass versus that found on the concrete is called a microclimate, because climate changes on a very small (or micro) scale.

If you zoom out to a larger scale, the same reasoning can apply to the whole species. Since organisms tolerate only a specific set of temperatures, if the temperature of their range becomes warmer or cooler, members of that species might feel more comfortable living somewhere else.

Biologists like Mike Angilletta use this idea to predict where a species will live in the future. For example, let’s imagine a grasshopper that only lives in a specific area of a forest. Year after year, that area is getting colder. First, biologists would figure out what temperatures were in the grasshopper’s current range before it started cooling down.  Then, they would predict that, as the forest cooled, the grasshopper would move to other areas of the forest that match their preferred temperature.

Animals can only tolerate certain climates. If their habitat gets too cold or too hot then they have to move.

The bubble is called a climate envelope, because climate creates the limit that envelops, or surrounds, the area in which animals can live. Either whole species or individual animals can move with the bubble over time. However, during some life stages (such as the egg stage), an animal cannot move. So if the bubble moves too quickly, animals will be left behind.

Predicting where animals might move using the climate-envelope can be problematic, since climate isn’t the only aspect of the environment that affects animals. Scientists are working hard to try to figure out how organisms choose habitats. An animal can choose habitats based on what it eats, how it moves, or whether other organisms are present. For example, certain lizards use special burrows made by wood rats to escape from the summer heat. This requirement would limit these lizards to areas where wood rats live. To account for the many different needs of animals, scientists are building “mechanistic” models. The details included in mechanistic models can improve predictions about where an animal will live in the future. 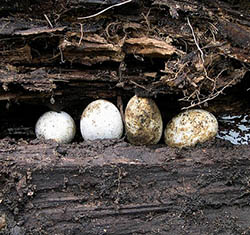 Eggs cannot move on their own. This makes them more vulnerable to changes in their microenvironment. Image by Zack Bittner on flickr.

Learning why a species lives in a certain habitat can take a long time. Therefore, scientists have to work together. Each scientist works to solve a small piece of this larger puzzle. One of ASU’s scientists, Michael Angilletta, is figuring out an important piece of the puzzle: the conditions under which eggs can survive.

Since eggs can’t move, they are particularly vulnerable to changes in their microenvironment. This makes them a very important life stage to look at when building a mechanistic model. It is important to learn how an organism survives at all stages of its life (baby, juvenile, adult), because each stage copes with the environment differently. If the youngest members of the species can’t survive, they can never grow up to have babies of their own.

Once we have a lot of puzzle pieces, how can we fit them together? Scientists use their findings to understand the environmental conditions that an animal needs to survive. Then, they gather information about the conditions found throughout the globe. These data are fed to a supercomputer, which calculates the areas where a species can live now and in the future. The computer makes color maps that show the effect of climate change on the species’ range. 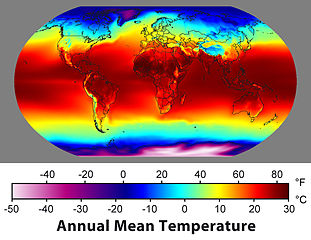 A map of average near-surface air temperature from 1961-1990. Such maps, also known as "climatologies", show how climates vary by location. Image by Robert A. Rohde for Global Warming Art.

Knowing where animals will live in the future is important to protecting them. If you could step into a time machine and visit the future, what sorts of animals would you look forward to seeing most? Would it be the African elephant or the tropical toucan? Climate change affects species from all around the world, and by predicting where they might need to move, we can help them.  Otherwise we might have to start carrying water jugs to elephants and giving air-conditioned nests to toucans!

Read more about: Mapping the Future 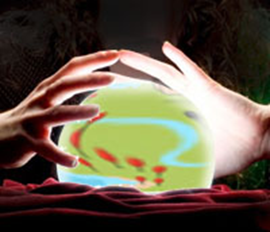 Scientists do not rely on crystal balls to map the future.