Chemoreceptor: a special cell of the sensory system that has receptors which respond to a chemical substance and initiate a reaction in the body.

Chemosensitive: the ability to detect changes in the chemical environment.

Epithelium: the layer of cells found lining the surface of most surfaces of the body. Epithelium is one of four types of tissues found in human body. The other tissues are connective, muscle, and nervous tissue... more

Papilla: a small structure that has a rounded shape. The papillae on the surface of the tongue give it its rough surface, and contain taste buds....more

Taste bud: a structure within papilla on the tongue, and which contain chemoreceptors. Taste buds are responsible for a sense of taste....more

Think about the last delicious food that you devoured. Maybe it was a savory, cheesy pizza. Or maybe it was a sweet yet tart slice of apple pie. How did eating it make you feel? What did you like about it? Furthermore, how were you able to taste it? Is there any reason to taste food other than to provide a pleasurable experience? 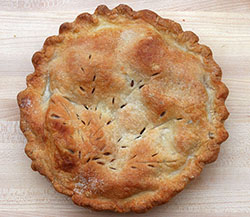 We get a lot of enjoyment from tasting certain things, like a sweet pie, but why is taste an important sense? Image by Jonathunder.

Beyond the simple enjoyment we get out of eating a tasty meal, a sense of taste is actually crucial to our existence. For early humans, a sense of taste evolved because it helped in identifying whether something was safe to eat or potentially harmful. Before the time of grocery stores and fast food restaurants, getting enough energy to fuel our bodies wasn’t as easy. We needed to find and eat foods that were rich in energy. Taste helps us to do this – energy-rich foods often taste sweet, and produce an enjoyable sensation. On the other hand, poisonous or toxic foods tend to taste bitter, and produce an unpleasant sensation.

The sense of taste, also called gustation, allows us to perceive different flavors from the substances we eat and drink. Just like the other sensory systems, taste relies on the activation of special receptors on the tongue and mouth. A receptor is a structure that collects information from the environment and converts it into a nervous signal that can be understood by the brain. Different kinds of receptors, as part of each sensory system (vison, hearing, touch, smell, taste), allow us to sense things like heat, pain, light, and chemicals. 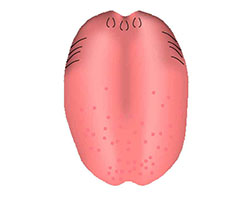 The tiny bumps on your tongue are papillae. Click for more detail.

Every food or drink that you put in your mouth has particular chemical components, and these chemicals are detected by special receptors called chemoreceptors. These chemoreceptors are contained within taste buds on the surface of the tongue. If you look at your tongue, you can see tiny bumps covering the surface, or the epithelium. There are thousands of these bumps, or papillae.

There are three different types of papillae based on their shape – fungiform, foliate, and circumvallate – each type located on a specific area of the tongue. Within each papillae, there are hundreds taste buds and within each taste bud, there are 50-100 chemoreceptor cells.

Not all chemoreceptors sense the same kinds of chemicals, or tastes. Humans have five kinds of taste buds – salty, sweet, sour, bitter, and the newly recognized, umami. Each of these types has a specific kind of chemosensitive cell inside. It was originally thought that each type of taste bud (and corresponding taste) was found only on a certain region of the tongue. We now know that this is not the case, and that each taste can be detected throughout the surface of the tongue.

Shelley Valle. "How Do We Sense Taste?". ASU - Ask A Biologist. 05 October, 2017. https://askabiologist.asu.edu/explore/how-do-we-sense-taste 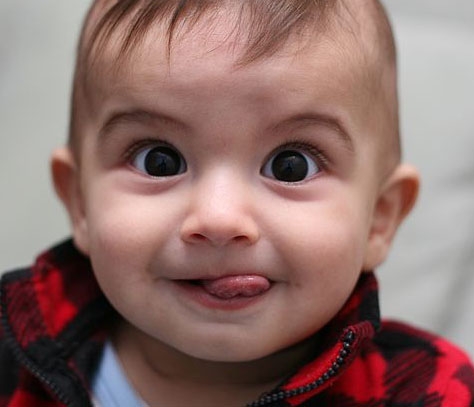 Humans and other animals use taste as an important tool to learn about their surroundings.