Civilization: the culture of a particular society that has reached an advanced level, such as having government, laws and written language.

Human remains: any skeleton or mummy of a person who lived in the past.

Ritual: a custom always done in the same away, sometimes for ceremonial purpose. 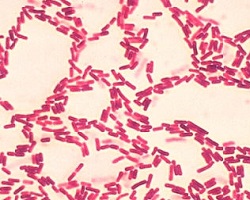 Most of the microbes in your body are helpful, like this bacteria, Bacillus coagulans. Image provided by Dr. William A. Clark.

Welcome to a world filled with billions of bugs. Not beetles or ants. No these living organisms are so tiny that you would need a microscope to see most of them. We call them microbes. Where is this world? It is your body.

For every one cell in your body, there is more than one microbe. That means there are 2-3 pounds of these invisible organisms in or on your body. But don’t start worrying. These billions and more likely trillions of microbes are very important to your body.

Microbes in the human body have been evolving for millions of years and have many important jobs. Some of them help to digest food. Other good microbes fight off bad ones. Still others make your feet stink.

But some microbes are strangers to our bodies and they can make us sick. There are certain bacteria, parasites, and pathogens that are not good to have inside or outside of our bodies. 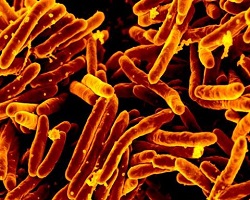 Today we often use medicines to kill off the bad microbes. This was not the case if you lived several hundred years ago. Your body had to fight the parasite or bacteria on its own. In some cases it won and in other cases it lost.

Today there are doctors and scientists who study bad microbes to learn how to treat them. There are also some scientists that explore the human remains of ancient worlds to learn about microbes and their evolution.

Studying the Past for Clues

Exploring the people who lived long ago is the job of the archaeologist. Some archaeologists study ancient disease. If you have watched any of a dozen science programs you likely have seen archeologists uncovering and exploring old civilizations.

These scientists study all parts of the human past. When they are given permission to excavate or examine human burials, they are also given a chance to look at sickness or disease in ancient societies. 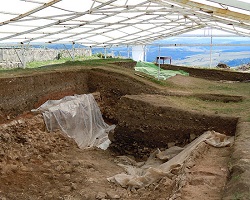 This shows the careful way archaeologists excavate (dig up) a site. This site is near Porolissum, an ancient Roman city now in Romania. Image by Saturnian.

But if many parasites and pathogens are microscopic, how do archaeologists study them? They have to find the evidence left by the microbe.

Adventures of a Microbe Hunter

This is where Indiana Jane’s adventure begins—in the bones of people who lived long ago. As a bioarchaeologist, she studies human remains from archaeological sites, where people lived hundreds or even thousands of years ago.

Traveling the world, Indiana Jane explores excavations and visits laboratories and museums hunting for bones that contain ancient microbes. These bones hold the clues for exploring how ancient people lived and died.

There are only a few types of bacteria or parasites that leave their mark in your bones, but how do they do it? When you have an infection that invades your bones, your body can do two things: make new bone, or take away bone, leaving behind holes.

These bony changes are the clues that help Indiana Jane discover what microbe is to blame.

Genetics is the study of DNA. But did you know that DNA can survive for hundreds, or even thousands of years? The job of an ancient geneticist is to hunt the DNA of anything that was once living. That is why archaeologists, who study ancient humans, and geneticists, who study DNA, can work together. 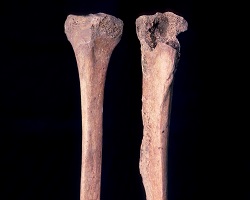 Here we see an infection in the tibia (lower leg bone) on the right. Click for more detail.

The clues left on the bones lead Indiana Jane to dig deeper for the ancient microbes that are trapped inside. Just like each human, each microbe has its own DNA. If you have a piece of ancient bone in your hand, do you think there will be more human DNA or microbe DNA left over? Human DNA.

Finding the microbe DNA is like finding a needle in a haystack. If Indiana Jane can capture the bacteria or parasite inside the bone, she can discover the genetic code of the disease itself. Sometimes she can also find the good microbes that keep us healthy. But don’t worry, the microbes are not still alive. Luckily though, their DNA is still there.

What kinds of questions can Indiana Jane answer with ancient microbe DNA? Well, she can find out if the microbes that make us sick today are the same ones that made people sick in the past. Or she can learn how long humans have been living with certain friendly microbes in our bellies. She can also see how the DNA changes over time. This information is really helpful for learning about when and where a human disease started. 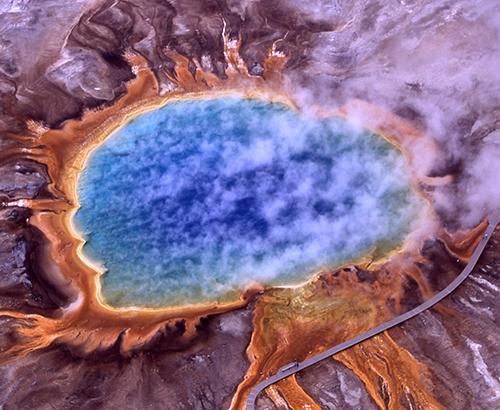 Microbes are found almost everywhere, from these hot springs to inside our bodies. The microbes at Yellowstone National Park's Grand Prismatic Spring give it its bright orange color.