Marsupial: a mammal that has babies born very early in their development that are usually carried and fed in a pouch on the mother's belly... more

All you can see around you is red desert sand, rocks, and bushes. You’ve been driving down an empty dirt road for the past three days, and you don’t really expect to see much of anything except for scrub brush, some trees, and more dirt. But, just then, out of the corner of your eye, you see something large moving nearby. You slam on your breaks just in time, as several animals bound across the dirt road in front of you. Some of them cross the road in a single jump, without even touching. 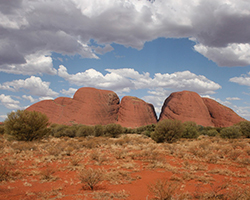 Here, living in part of the desert in Australia, are red kangaroos. Kangaroos are marsupials—mammals that are born early in their development and that then have a period of growth inside a pouch on their mother’s belly.

Kangaroos only live in Australia and New Guinea, a large island just north of Australia. While many kangaroos live in the “outback,” or wild areas, many live near or in towns as well. People must be careful when driving around so they don’t crash into kangaroos on the road. 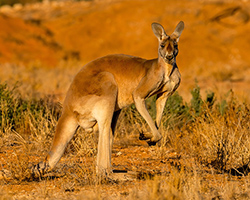 Some male red kangaroos can be up to six feet tall. Image by David Cook via Flickr.

You pull off along the dirt road and get out of the car. Most of the kangaroos have gone already, but one is moving past you slowly and stops. You don’t get too close, as kangaroos can defend themselves very well, but you size up the creature standing there. The first thing you notice is just how big kangaroos can be.

The size of an adult is different for different species, but this red kangaroo is slightly taller than you are. Red kangaroos are the largest and the males can stand at around 1.8 meters tall (almost 6 feet tall). The western grey kangaroo is the smallest great kangaroo and the adults stand around 1.3 meters (or 4 feet) tall.

Kangaroos can also be pretty heavy. An adult male red kangaroo can weigh just over 90 kilograms (about 200 pounds). That’s heavier than an average healthy adult human. They also know how to throw that weight around if they need to… and it’s mostly with their hind legs. 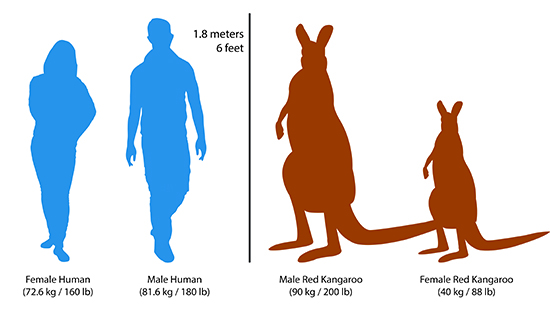 Male red kangaroos can be about as tall as an average adult human. Female red kangaroos are much smaller than the average human. Why do you think kangaroos have such a large size difference between males and females? 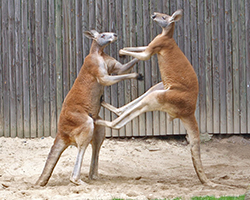 When kangaroos fight, they do a lot of pushing and grabbing with their front legs, but their main weapons are their hind legs. They can lean back on their large tails to balance, while they launch their feet, delivering painful kicks. They also have claws, making those kicks and grabs even more dangerous. Luckily, kangaroos only usually fight when they are defending themselves, or fighting over a mate.

Their strong legs really come in handy for the way they move, by hopping. While hopping seems to take a lot of energy, it is actually a very efficient way to move. A red kangaroo can jump up to 25 feet in one hop, and can jump nearly 6 feet high. Once they start moving, they can hop at speeds of up to 35 miles per hour, which is about the same speed as a horse can run.

Large hind legs and small front legs seem to work just fine for the daily activities of kangaroos. But you might wonder if kangaroos swim. Does the lack of large front legs make it difficult for them to move through water?

You might be surprised. While kangaroos don’t seem to swim very often, they can swim. Many observations have been made of kangaroos swimming in a small body of water, or even in the ocean!

What Do Kangaroos Eat?

Young joeys, like all young mammals, depend on milk as their main source of food. But what do adult kangaroos eat? 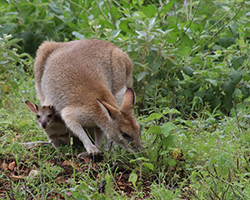 Like kangaroos, wallabies are also herbivores. Image by Andréas Astier.

All kangaroos and wallabies are herbivorous, meaning they eat plants. They are also grazers, so they eat mostly grass. Most of their activity seems to be at night or in the mornings and evenings, but you can also see them out grazing or moving around during the day. Great kangaroos can live alone, but they often live and graze in groups called mobs. The amount of land that they use on a regular basis may depend on things like group size, climate or season, and the quality of the plants they are eating. In part because of what they eat, kangaroos fill the niche that is filled by deer or antelope on many other continents.

On most continents, large herbivores are often hunted for food. The case isn’t any different for kangaroos. They have long been hunted by the indigenous peoples of Australia for meat and for their skins and bones. They are also hunted by other Australians for the same reasons, for meat and skins to sell. But more recently, kangaroos are also in danger due to the risk of being hit by cars on roads. Because of their large size, this is not only dangerous for the kangaroo, but for the people in the cars as well. 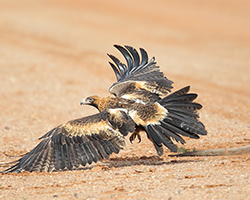 A wedge-tailed eagle flying away from its meal, a kangaroo that was killed on the road. Click for more detail.

The kangaroo starts to move forward again and you watch it cross the road before getting back into your car. There’s a kangaroo crossing sign up ahead, and now you take it with a bit more seriousness. These animals are large and powerful, and they are adapted to live in harsh areas. If you’re exploring Australia or New Guinea, you might come across them when you don’t expect it. You make sure to keep a better look out, to help protect these beautiful creatures.

About the author: Karla Moeller is a biologist and a science communicator working in the Provost's Office at Arizona State University. She is also a children's book author and has written two books, including: Joryn Looked Up. 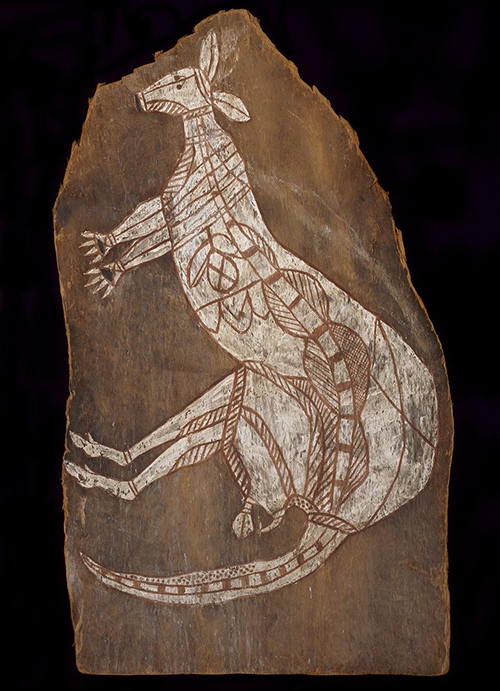 Aboriginal Australians have featured kangaroos in their art for thousands of years. This piece, Kangaroo Painting, was created by an artist from an unidentified tribe using paint on eucalyptus bark sometime between 1925 and 1965.